Nigerian piracy can be managed

On 4 June BIMCO, together with ICS, IMCA, ITF and OCIMF, had arranged a symposium about piracy in the Gulf of Guinea. The symposium came to the conclusion that the Nigerian piracy problem occurs in a small area and can be solved if Nigeria wants it.

The symposium brought together a range of stakeholders from governments in the region and elsewhere, shipowners, operators and navies and were briefed about the high level of sophistication of the most serious types of crime, namely hijack for cargo theft and kidnap of seafarers for ransom.

Based on research in Nigeria and interviews with a pirate gang in the Niger Delta, Bertrand Monnet from the EDHEC Business School in Paris explained that Nigerian pirates are given very specific orders by their masterminds about which vessels to attack, and which seafarers to kidnap. Sometimes the intended kidnap victims are known by name, sometimes the pirates select kidnap victims according to their nationality, well knowing that some nationalities are more likely to be covered by kidnap for ransom insurance and thus more likely to yield a high ransom.

With the level of information already known by the pirates in advance of the attack and kidnap, it is evident that information leaks are occurring. Potential sources of such leaks are e.g. agents, company representatives, port state control officers, immigration authorities, navy and security companies.

The symposium also saw the appearance of a captain of a vessel which was attacked some months ago, when the captain and five other crew were kidnapped for ransom by Nigerian pirates. The captain explained how the kidnapped seafarers were taken ashore in the Niger Delta, and initially moved between different hideouts before eventually being taken deep into the jungle and held there until the ransom was paid.

The symposium received information about the Yaoundé Code of Conduct (YCoC) and the progress made with regards to pursuing the Code’s objectives of combating transnational, maritime crime.

The YCoC was agreed in 2013 and lists several initiatives towards achieving its objectives:

While transnational cooperation is at the core of the YCoC, it stresses that activities to suppress transnational crime remain subject to the sovereign authority of each signatory state.

In the Gulf of Guinea region, several capacity building initiatives are being undertaken to support the YCoC as well as national initiatives. The capacity building initiatives serve to strengthen the regional cooperation in areas such as naval and coast guard capabilities, the legal framework, exchange of information and coordination of law enforcement efforts. Each year, the Nigerian Navy carries out exercises with the United States Navy (exercise OBANGAME EXPRESS), and the United Nations Office on Drugs and Crime has conducted an assessment of local needs and existing capacities to initiate a judicial management system, that would be able to support maritime piracy and other cases.

Corruption still stands in the way of results

While this all sounds very promising, it remains a fact that countries like Nigeria still has a long way to go before a state of security can be said to exist in their territorial waters, let alone adjacent international waters. So why is it so difficult to get these initiatives off the ground? According to sources close to the administration of some of the many capacity building initiatives, one recurring problem is corruption.

When funds are allocated to capacity building projects, a portion of such funds tend to go missing without leaving an auditable trace. This is extremely unfortunate for two reasons: First of all the capacity building is slowed down and fails to deliver the expected results in terms of new capacity to generate maritime security. Secondly, it sends a destructive signal to the many men and women in the region who have joined the law enforcement agencies in the hope to do something good for their fellow citizens. The blow to the morale is even bigger if the perpetrators get away with it, and if donor countries are not taking prompt action to implement mechanisms to prevent reoccurrence.

The many capacity building projects have so far delivered little effect in terms reducing the piracy threat. Some suggest that the projects are a convenient way for foreign countries to signal commitment to combat piracy, while at the same time keeping away from being caught up in issues that can arise out of participation in direct anti-piracy operations, e.g. challenges with handing over pirates.

Corruption is also the reason that many shipowners are skeptical when it comes to trusting local law enforcement agencies. While for example the new administration in Nigeria has promised to fight corruption, seafarers and companies report that problems with corruption and crime in Nigeria are still rife. Almost every aspect of operating ships in the region is affected by this, including corrupt officials for example abusing their powers to extort a shipmaster, or dishing out excessive fines without proper reasons, in order to be paid in cash directly to the official without a proper receipt. Incidents like these have made it very difficult for the shipping industry to wholeheartedly trust authorities in the region.

At the Symposium, BIMCO’s Head of Maritime Security – Jakob P. Larsen – outlined possible solutions that could create effect quickly. The key point raised was, that if Nigeria stands together with some of the World’s leading naval nations and concentrate their efforts where it is most needed, the Nigerian piracy problem can be isolated contained with relatively few resources.

To most effectively manage the Nigerian piracy problem, it is important to distinguish between Nigerian Piracy and the broader problems with maritime security in the wider Gulf of Guinea. Furthermore, it is equally important to recognize that to eradicate the problem, you do not need to apprehend each and every pirate out there, you only need to make it dangerous enough for the pirates to deter them from venturing out to sea again.

The vast majority of attacks against international shipping are staged from the Niger Delta, and they primarily occur within 150 miles from the Niger Delta coast. Some attacks take place inside territorial waters, and this is the domain of the Nigerian Navy and thereby their responsibility to tackle. But many attacks also occur outside territorial waters and, in accordance with the UNCLOS convention, can thus be addressed by any country wishing to do so.

For Nigerian piracy, the most effective solution would be to establish a heavily patrolled area around the preferred staging areas and hunting grounds off the Niger Delta. Furthermore, this area also enjoys the benefit of a large concentration of offshore installations which can be utilized as radar platforms, enabling maritime domain awareness in support of the anti-piracy efforts.

A combination of Nigerian patrol vessels operating close to the coast, in partnership with ships and helicopters from major naval nations operating outside the territorial water limit, would constitute an effective combination. It is estimated that 4 – 5 Nigerian patrol vessels and 2 – 3 frigates with onboard helicopters from major naval nations could be an effective cocktail that could prevent and deter pirate attacks.

To ensure that the efforts of naval units from different countries are coordinated and deconflicted, a ‘Shared Awareness and Deconfliction’ forum (SHADE) should be established. The SHADE concept has already demonstrated its worth in antipiracy operations in the Indian Ocean, and in rescue operations in the Mediterranean. A SHADE for Nigeria should be led by Nigeria with the support of non-regional navies experienced with joint operations.

To avoid legal challenges with handing over pirate suspects to Nigeria, Nigerian law enforcement personnel should be embarked in non-regional warships. This would allow Nigerian officers to be formally in charge of making the arrests of pirates. 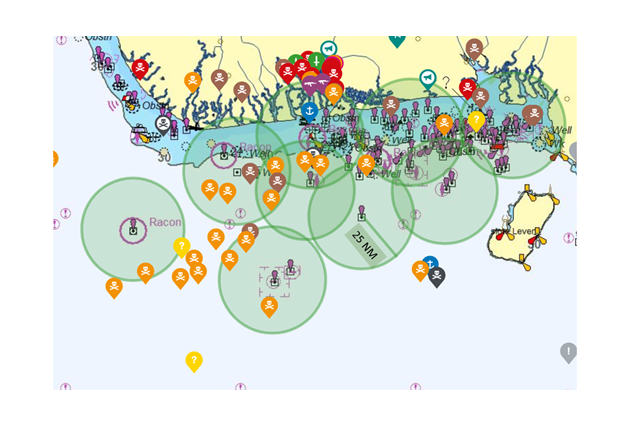 The waters off Niger Delta where the majority of piracy in the Gulf of Guinea occurs can be covered reasonably well by means of radars on offshore installations.

With these key takeaways, BIMCO will now work tirelessly with the international community – not least including Nigeria – to develop solutions which can bring the Nigerian piracy problem under control in the short term, and at the same time form the basis of continued development of long-term solutions, for example by means of capacity building in Nigeria and other countries in the region.

Contact online
BACK TO: Safety & Security and the use of Privately Contracted Armed Security Personnel (PCASP) in Arabian Gulf, Strait of Hormuz and Gulf of Oman NEXT: Security advisory, 13 June 2019 attacks on tankers East of Strait for Hormuz