Chinese iron ore imports fell to 88.5 million tonnes in July, the lowest level since May 2020.

The fall in July means that accumulated imports are lower than in the first seven months of 2020. Imports this year have totalled 649.0 million tonnes, a 1.6% decline from January to July 2020. In July, imports were down 21.4% from the same month in 2020 when they reached a record high of 112.7m tonnes. 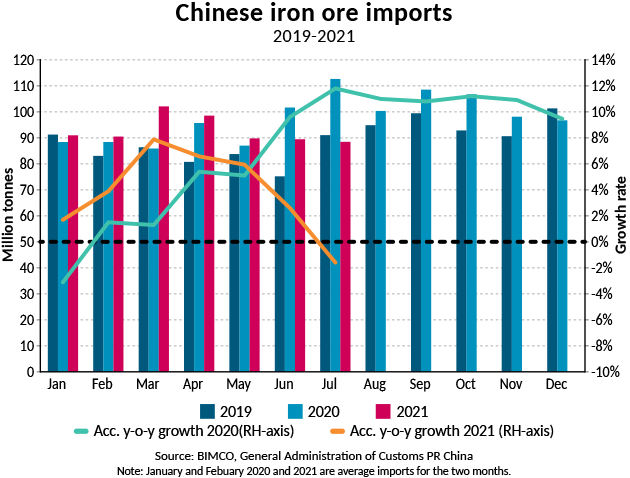 In addition to the July drop in iron ore imports China’s steel production fell to 86.8m tonnes (source: NBS China) as the government seeks to impose limits on steel production to meet climate emissions goals. Chinese steel production was strong in the first six months of the year, and with a resilient domestic demand, it appears that the government restrictions are limiting further growth rather than the actual appetite for steel.

“A decline in Chinese iron ore imports following record-breaking imports in the first six months to the year seemed inevitable viewing that the Chinese government wishes to keep emissions growth in check. However, as demand for steel remains strong in China, it remains to be seen to which extend the Chinese government will continue to limit steel supply due to environmental concerns,” says Peter Sand, BIMCO’s Chief Shipping Analyst.

BACK TO: China's 2021 crude oil imports down 5.7% as strong start loses steam NEXT: Only 3 VLCCs sold for demolition in 2021 as secondhand prices tempt