The bad news for liner operators appears to have no end. In a normal year, the weeks leading up to Chinese New Year (CNY) bring an increase in volumes and freight rates. So far, however, the lead-up to CNY in 2023 has been the worst in 13 years.

The China Containerized Freight Index (CCFI) measures average Chinese export container rates. The index has seen a 50% drop since February 2022 and stood at 1,730 seven weeks ago. Rather than stabilising and then climbing towards CNY, it has continued to fall. Last week it hit 1,271 and has therefore dropped by a further 27% since mid-November.

From 2011 to 2020, the CCFI on average increased 3% in the seven weeks from week 10 before CNY to week three before CNY. The worst year was 2012 when the CCFI fell 6% during those seven weeks while the best year was 2020 with an 8% increase. The market situation in 2021 and 2022 was unique as congestion and a spike in consumer demand led the market, and the lead-up to CNY was also strong. So far, the development in 2023 is therefore the worst in thirteen years. 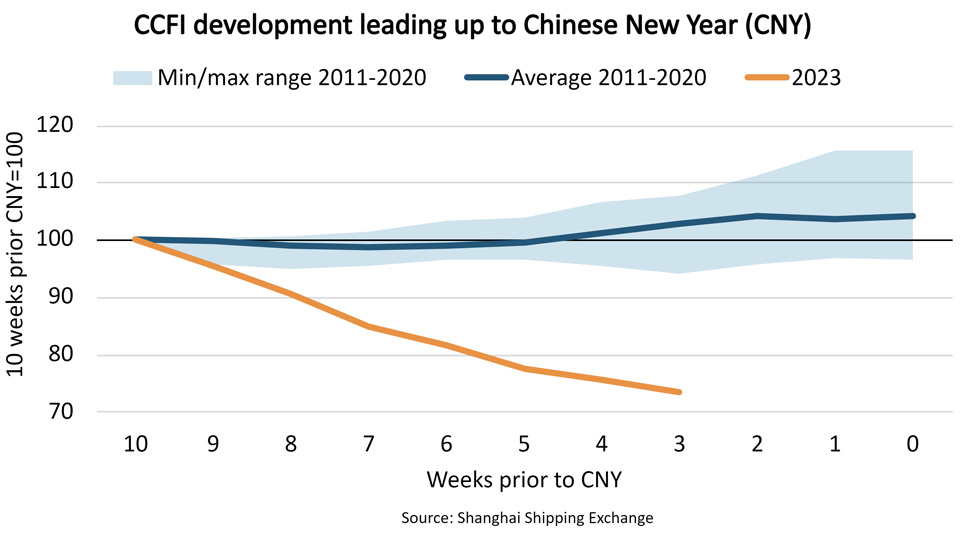 The CCFI is showing a worse than normal development in all trade lanes. To Europe and Mediterranean, the index has fallen by respectively 34% and 57% during the last seven weeks whereas the index for exports to the US West Coast and East Coast are down by 26% and 27% respectively.

During the last seven weeks, the China Containerized Freight Index (CCFI), which records average container freight rates for exports out of China, has, in contrast to earlier in 2022, also dropped faster than spot rates for exports out of Shanghai (as recorded by the Shanghai Containerized Freight Index (SCFI)). The SCFI has fallen 23% whereas the CCFI has fallen 27%.

In absolute terms, the SCFI and CCFI remain respectively 18% and 49% higher than at the same time in 2019, and the rate increases achieved during 2020 to 2022 have not yet been fully erased. As highlighted in BIMCO’s most recent Container Market Overview and Outlook, supply growth is expected to outpace demand growth in 2023 due to the high number of planned newbuilding deliveries and add further pressure on freight rates. Cargo volumes may recover from current levels once businesses have adjusted inventory levels, but it is unlikely to be sufficient to improve the supply/demand balance unless all liner operators take action to match capacity offered to market developments, something they so far have apparently been unable or unwilling to do.

Contact online
BACK TO: Coal shipments to China fell 12.2% in 2022, mixed outlook ahead NEXT: Tankers end 2022 with 78% time charter contribution margin and best 2023 outlook