What a difference a year makes! At the end of 2021, container ships were enjoying a historically strong market and freight and time charter rates had yet to peak. At the same time, dry bulk ships were seeing multi-year high rates slipping away, although still enjoying better returns than in previous years. However, tanker ships were seemingly still stuck in a COVID market rut without any immediate hopes for a strong comeback.

During 2022, Russia’s invasion of Ukraine in late February has been a key market driver. It led to higher food and energy prices and inflation spiked, especially in Europe and North America. Central banks turned to increasing interest rates to control the inflation that, despite attempts, remains high. At the same time, G7 countries, led by the US and the EU, implemented ever stricter sanctions on Russia. Elsewhere, the Chinese economy struggled under the weight of a strict Zero COVID policy.

Less than two weeks before the new year we can conclude which markets prospered under these conditions and which faltered. The container market peak has fizzled out and a brief resurgence in the dry bulk market during spring did not last. However, the tanker markets have prospered, and the Baltic Exchange indices for the two tanker markets have hit their highest levels since the mid-2000s. 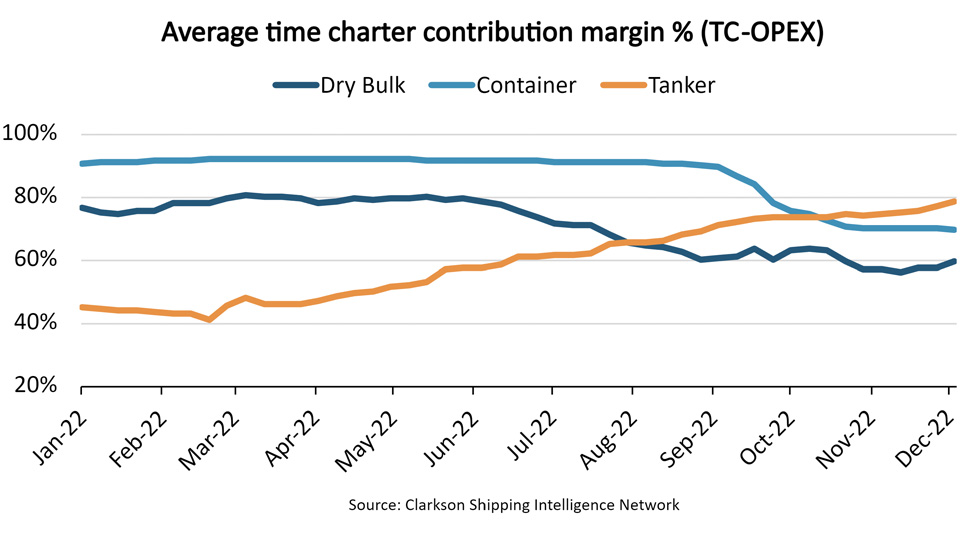 During 2022, tanker trades have benefitted from a 4% increase in oil production and a reshaping of tanker trades. As a result of the war in Ukraine, the EU and Russia found new suppliers and new buyers respectively as the year progressed. Average sailing distances increased and added to tonne miles demand. In December, EU’s ban on Russian oil took effect and closed Russia-EU trade, and in February the trade in refined products will close as well.

On the other hand, the time charter contribution margin for container ships slipped in 2022 from an average of 90% in January to 69% in December, and for dry bulk ships the margin slipped from 76% to 59% during the same period.

In the container market, port congestion reduced and led to increased capacity supply while stagnating consumer consumption and a bleaker outlook have hurt demand. Businesses have begun to reduce inventories and global container volumes are likely to end the year 4% lower than last year, driven by volumes lower than in 2019 during the last four months of the year.

A renewed interest in coal in the EU and a ban on Russia-EU coal trade which started in August were not enough to drive the dry bulk market upwards. Weak demand in China plagued the market throughout the year, and a struggling real estate sector hurt iron ore demand while increased local mining reduced demand for imported coal.

In 2023, the tanker market will benefit from increased sailing distances for both crude and product tankers as EU’s ban of Russian refined oil products will take effect in February. Supply growth will be minimal, and we expect the tanker market to be the best performing market of the three main shipping markets. The container market is likely to suffer from over supply while the dry bulk market is not expected to see significant demand growth.