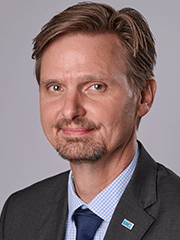 Jakob P. Larsen joined BIMCO on 1 June 2018 to become Head of Security. Within Jakob’s scope are all matters related to maritime security including piracy, drug smuggling, war, terrorism, stowaways, mixed mass migration and cyber security. In addition to maintaining a close dialogue with governments and international organizations, his role includes assisting members with all aspects of maritime security. In 2010, holding the rank of Commander, Jakob left the Danish Navy to become Maritime Security Officer in BIMCO. In 2013, after three successful years in BIMCO, Jakob changed over to Nordic Tankers where he expanded his responsibilities over time to become Head of HSSEQ. In 2015 Jakob went to Maersk Line to become Global Security & Marine QA Manager. During his time in Nordic Tankers and Maersk Line, he managed a number of security challenge all over the World, including operating small tankers and container ships in and out of the Niger Delta, pirate attacks, kidnaps, assassinations, evacuations, drug smuggling and stowaways.

BACK TO: Ian Perrott NEXT: Jean Koh