On 8 June 2022, the European Union (EU) decided to impose a ban on seaborne imports of Russian crude oil and oil products. The ban on crude oil will take effect on 5 December and by then the EU must have found new suppliers and Russia must find new buyers. 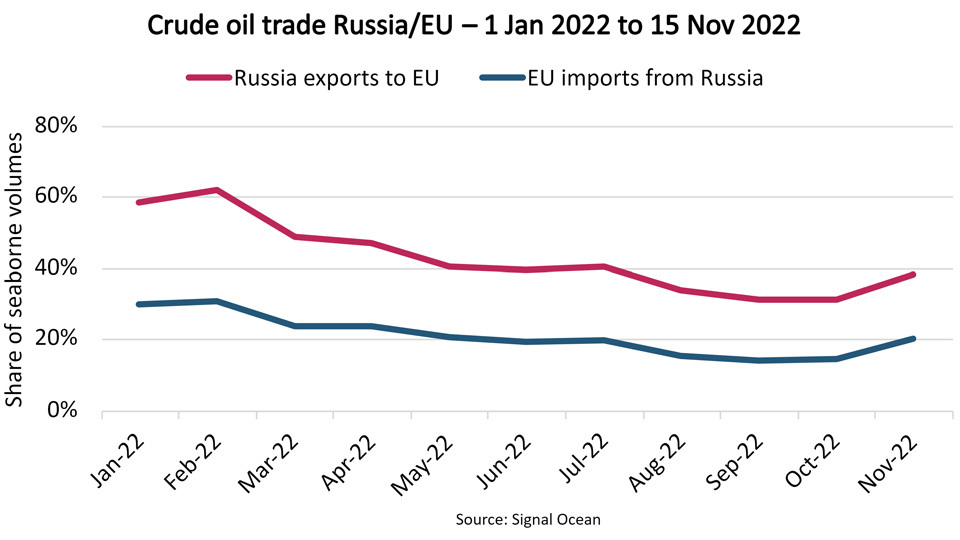 Russia has found new buyers in India and China and each now imports about 25% of Russian seaborne crude oil exports, up from respectively 0% and 15% in the beginning of the year. The EU has found new supply in many locations with the Persian Gulf, West Africa, and East Coast South America standing out. All in all, average haul for crude tankers is increasing and will increase further once the ban takes effect.

Despite the coming ban, Russia has exported 10% more via sea in 2022 than in 2021. However, the volumes have remained 7% lower than in 2019. Looking forward, both the US Energy Information Administration (EIA) and the International Energy Agency (IEA) forecast that Russian oil production will reduce by nearly 2 mbpd in 2023 compared to pre-war production, nearly a 20% reduction. The assumption is that Russia will not be able to find new buyers for all the remaining crude oil and oil products previously destined for the EU. In addition, the final structure of the oil price cap currently being discussed amongst EU, USA, and their allies could end up restricting exports as well as availability of shipping capacity.

The exports lost could instead move out of North and South America where oil production is expected to increase and make up for the lost Russian production.

Contact online
BACK TO: Demolition prices slip to USD 525 per LDT in India despite policy change NEXT: Bulk carrier deliveries could hit 19-year low in 2024, boosting contracting