On 22 July, Russia and Ukraine signed an agreement with Turkey and the United Nations to allow grain exports from three ports in western Ukraine: Yuzhne, Chornomorsk, and Odesa. Combined, the three ports accounted for 65% of the country’s total grain exports over the past five years. Exports could, however, face several difficulties.

The deal is valid for 120 days, with an option to further extend it, and it allows bulkers to be escorted to the ports through a safe corridor. To create a navigable passage, the corridor will have its sea mines removed and that process is expected to take one to two weeks. 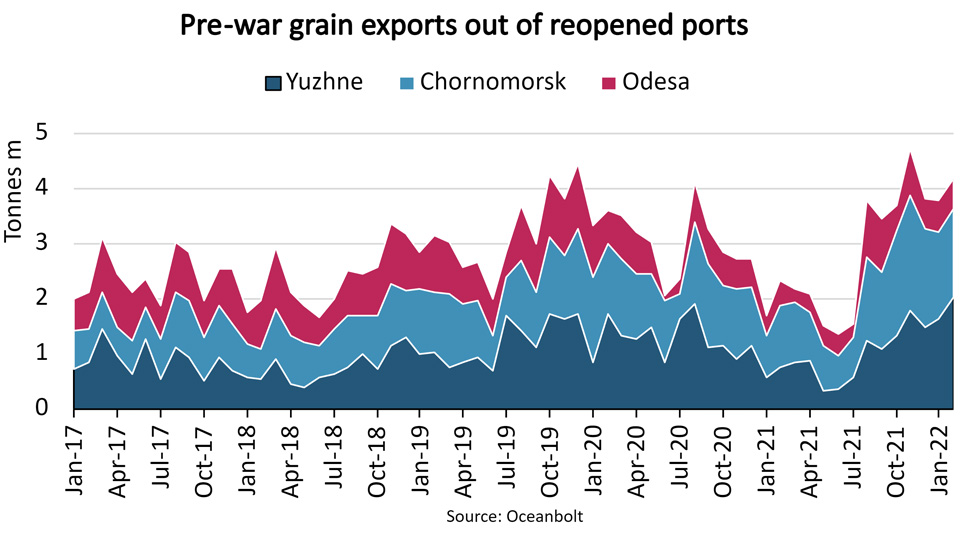 With this deal, the UN hopes to increase monthly grain exports from Ukraine by five million tonnes. However, since over the past five years these three ports have not ever handled such a high amount of grain, meeting this target could prove to be a challenge. Even if port logistics accelerate to expedite exports, the need to escort ships in and out of the ports is likely to cause some congestion.

Over 20 million tonnes of Ukrainian grains are ready for export and the country’s grain traders union (UGA) expects around 25 million tonnes more to come from the 2022 harvest. With the wheat harvest underway and the maize harvest to start in September, a swift export of grain is needed to ensure space in silos for the new harvests. To accelerate exports the Danube ports, as well as land routes, will likely continue to play an important role in the shipment of Ukrainian grain in the short to medium term.

A significant obstacle to Ukrainian grain exports will be the voyage risk and corresponding insurance premiums. For the shipping of Ukrainian grain to be attractive, high rates will be necessary to mitigate risk-related expenses. Russia’s recent missile strikes in ports such as Odesa will add to the insecurity and uncertainty of operating in the Black Sea.

Due to limited global supply of wheat and maize, a return of Ukrainian grain to the global market would positively impact the Panamax, Supramax and Handysize segments. Additionally, the boost in Ukrainian exports would help combat inflation and food insecurity, particularly in emerging economies, and help bring needed stability to the global economy.

Contact online
BACK TO: EU retail sales volumes fall 1.3%, indicating further weakening of container imports NEXT: Tanker contracting only 1.6m DWT in first half of 2022: lowest half year on record