BIMCO has over recent weeks published a lot of information about COVID-19 and which measures different countries have implemented in an effort to curtail the spread of the virus. An overview can be found on BIMCO’s website.
In connection with time charter, the most used dry cargo charter party forms do not contain reference to the consequences in the event when a ship is ordered to proceed to a port, which may or may not be affected by an infectious or contageous disease.

The series of New York Produce Exchange (Nype) charter party forms all provide that the master is to comply with the time charterers’ orders as regards employment. The charterers are, however, compelled to order the ship to trade only between ”safe ports and safe places within the trading limits”, which begs the question: is a port where COVID-19 restrictions have been imposed, safe?

The answer to that question will depend on the circumstances, but if precautions have been instigated locally and on board the ship, with a view to ensure that the crew remain as safe as circumstances permit, it will probably be difficult for the owners to refuse to comply with the charterers’ voyage instructions. Even if there is no specific provision expressly dealing with the pandemic at hand, an indemnity is likely to be implied when following the charterers’ voyage instructions.

As will be seen from NYPE 2015, the off-hire clause (17) has been extended considerably by including many events often added when compared with the off-hire clause (15) in the 1946 edition of this form. Though, we believe, the 1946 edition is still the most widely used dry cargo time charter party, BIMCO invariably recommends that the most recent form of the document is used.

Another example of a time charter party is BALTIME 1939 (Revised 2001) in which Clause 14(a) excludes the charterers from giving voyage orders to, inter alia, ”any place where fever or epidemics are prevalent, or to which the Master, officers and crew by law are not bound to follow the vessel...”

To ensure that the contract covers the situation at hand, BIMCO recommends that the BIMCO Infectious or Contagious Diseases Clause for Time Charter Parties 2015 is included in time charter parties. Not many standard contracts contain that in the printed text but the SUPPLYTIME 2017 does include it in clause 25. Explanatory notes to that clause can be found on the website.

This could be if the ship runs aground, or if the ship is targeted for an PSC inspection and time is lost thereby. This is clear from the clause and as such, the owners will be able to evaluate the possible consequences already in the negotiating stage.

Some off-hire provisions are, however, amended in a way that may turn out to have dire consequences for the owners. The off-hire clauses usually contain a sweeping-up provision referring to ”or other causes” or ”other similar causes”, which will both be construed according to the ejusdem generis rule of construction, i.e. the particular event must be in the same category as the events named in the clause. If, however, the above is amended to ”or any other causes whatsoever”, the word ”whatsoever” will be taken at face value, i.e. so long as the charterers are able to distance themselves from the cause, they will be able to off-hire the ship.

These general comments are also worth keeping in mind when assessing whether the ship may be held off-hire in connection with an infectious and contagious disease.

By Support & Advice
in Copenhagen, DK 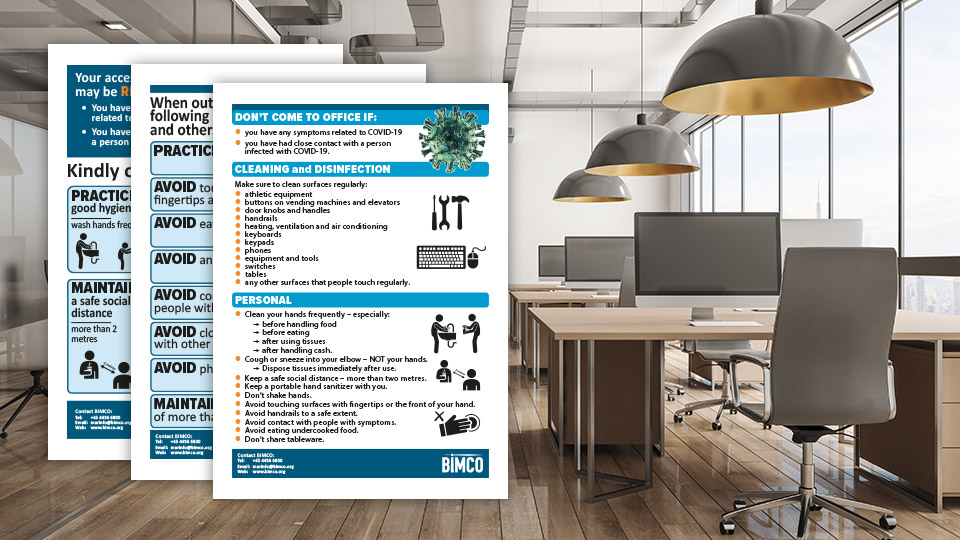 BIMCO has produced posters and guidelines to protect employees and visitors in offices and office buildings against Coronavirus (COVID-19).