RECORDED WEBINAR: A return to normal and prospect for laid-up ships

During the two and a half months since our last update, the container market has remained on the path towards “normalisation”. The Shanghai Containerized Freight Index (SCFI), which represents spot freight rates for loading in Shanghai, has fallen another 49% and is now 74% below its peak of early January 2022. The index for average freight rates for all containers loading in China, the China Containerized Freight Index (CCFI), has also continued to fall and is now 40% lower than two and a half months ago, and 54% lower than at its peak reached in February 2022. The SCFI is back to levels last seen in September 2020, whereas contract rates, and thus average rates, respond slower to market conditions. Consequently, the CCFI still matches January 2021 levels.

The time charter rates and second-hand prices for ships have followed the freight rates downwards. Compared to two and a half months ago, average time charter rates and average second-hand prices are down 64% and 33% respectively. In contrast, average newbuilding prices are only 2% lower as the market depends on costs and supply/demand developments for shipyards rather than on the freight market.

At the same time, port congestion has eased, and the Kiel Institute for the World Economy estimates that 10% of shipped cargo is currently caught in congestion vs. nearly 14% at the height of congestion problems and 7-8% pre-COVID. 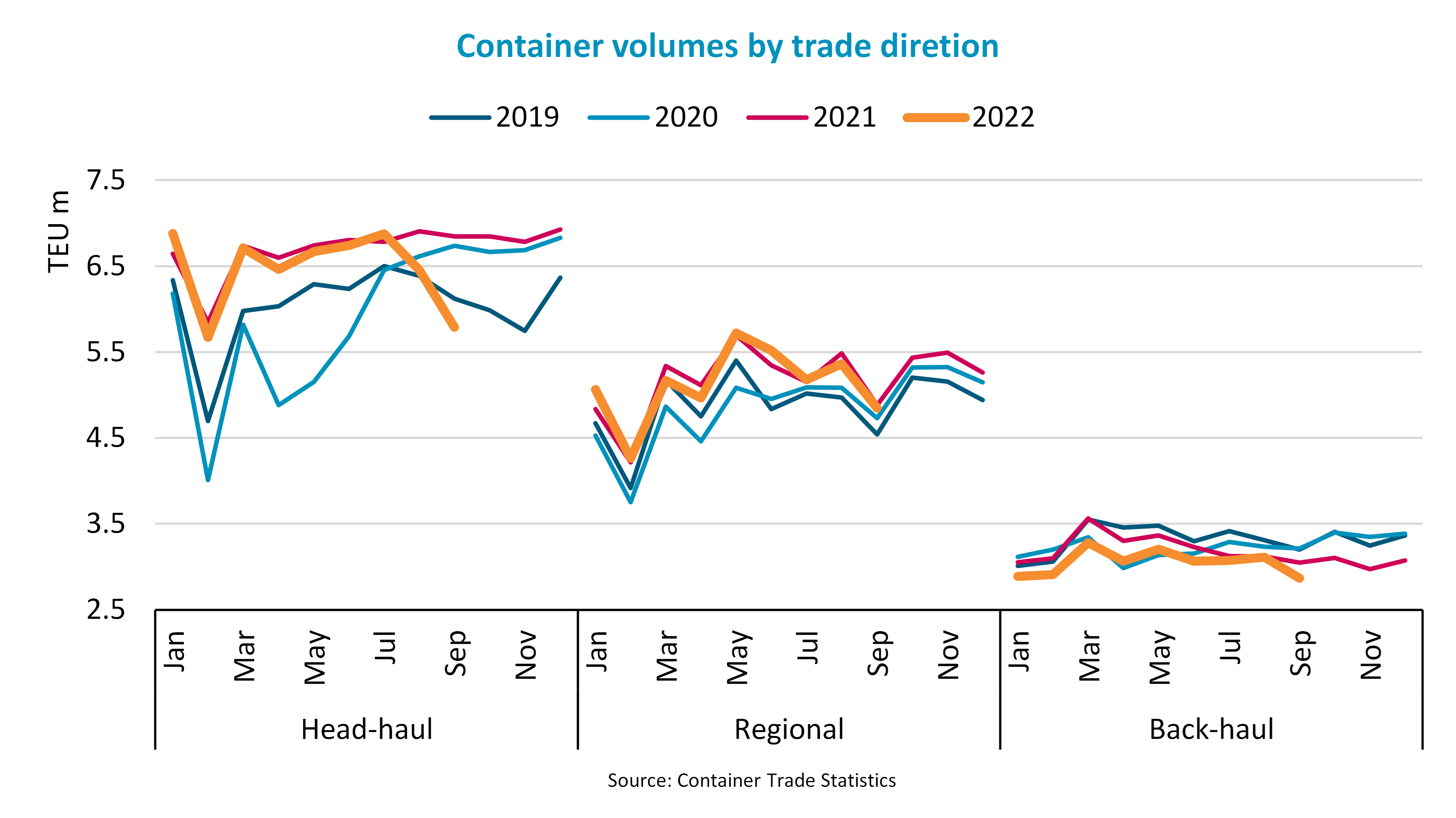 The IMF’s estimate for growth in the global economy in 2022 remained unchanged at 3.2% in October’s World Economic Outlook report. However, the challenges for the global economy continue to mount, and the effects of the Russian invasion of Ukraine, a cost-of-living crisis caused by inflation, and an economic slowdown in China remain key concerns.

Consequently, the IMF has reduced its forecast for global GDP growth in 2023 from 2.9% to 2.7%. In 2024, growth is estimated to increase to 3.2%. Significant risks to growth are a cause for concern and the IMF believes that there is a 25% probability that growth in 2023 will fall to below 2%; consequently, it has also developed a downside scenario.

This downside scenario takes into account the possible adverse impacts of higher oil prices, further decreases in real estate investment in China, lower employment combined with lower productivity, and tighter global financial conditions. Should all four risks materialise, global economic growth is estimated to be 1.5 pp slower than the base case in 2023 and 1.6 pp slower in 2024. China would see the greatest slowdown, with a decline in real estate investment being of greatest concern. In other emerging markets and advanced economies, the greatest concern is a tightening of financial conditions. Should this downside scenario prove to be correct, the global economy would see the lowest growth over a two-year period since the early 1980s (if excluding the two-year periods surrounding the 2009 financial crisis and that surrounding the 2020 COVID downturn).

The advanced economies are projected to return very minimal growth, even in IMF’s base case and it will once again be emerging markets and developing economies that will drive growth. Advanced economies are projected to grow by 1.1% in 2022 and by 1.6% in 2023. North America and the Europe and Mediterranean region are both forecast to grow by 1.0% in 2023, then by 1.3% and 2.2% respectively in 2024. As the two regions are drivers of about two thirds of all head-haul trade volumes, this significantly limits volume growth potential. Head-haul trades to the two regions equally deploy most of the fleet.

The effects of the global economic headwinds are already being felt in the container market. Retail sales have plateaued, and US retailers are predicting a slower than normal holiday season at the end of the year. At the same time, it appears that businesses have also begun to reduce inventories that have seen record growth during the last twelve months in both the EU and US, where employment is holding up but purchasing power is falling as wages are not keeping pace with inflation. In the US, the personal savings rate has dropped below the pre-COVID level; the excess savings amassed during 2020 and 2021 are diminishing quickly, while credit card debts have reached the second-highest level on record. Consumers and businesses in the rest of the world are dealing with similar concerns, and many countries are also battling additional import price increases due to devalued local currencies vs. the US dollar. Liner operators have reacted to the lower volumes by closing services and increasing the number of blanked sailings.

All in all, based on the present volume trend and the IMF’s base case GDP growth estimates, we have revised our growth estimate for combined head-haul and regional trade volumes in 2022 to a reduction in the 3-4% range. For 2023 and 2024, we estimate growth in the 3-4% range each year, although it could end in the 1-2% range should global economic growth instead be closer to the IMF’s downside scenario.

Despite the gathering clouds, contracting has continued at a significantly higher pace than the average for the past five years, and the orderbook is now 29% the size of the trading fleet. So far, nearly 2.5 million TEU have already been contracted in 2022, and while we estimate that full year contracting will total 2.9 million TEU, we believe it will slow down significantly during 2023 and 2024.

Demolition has been almost non-existent during 2022. Even though the supply/demand balance is worsening, we believe it will take some time for demolition to gather pace and have therefore estimated figures of 0.35 million TEU for 2023 and 0.48 million TEU for 2024.

The key driver of ship supply during 2023 and 2024 will therefore be the delivery of the ships contracted during the last couple of years. Deliveries are estimated to be 2.4 million TEU in 2023, increasing to 2.8 million TEU In 2024. 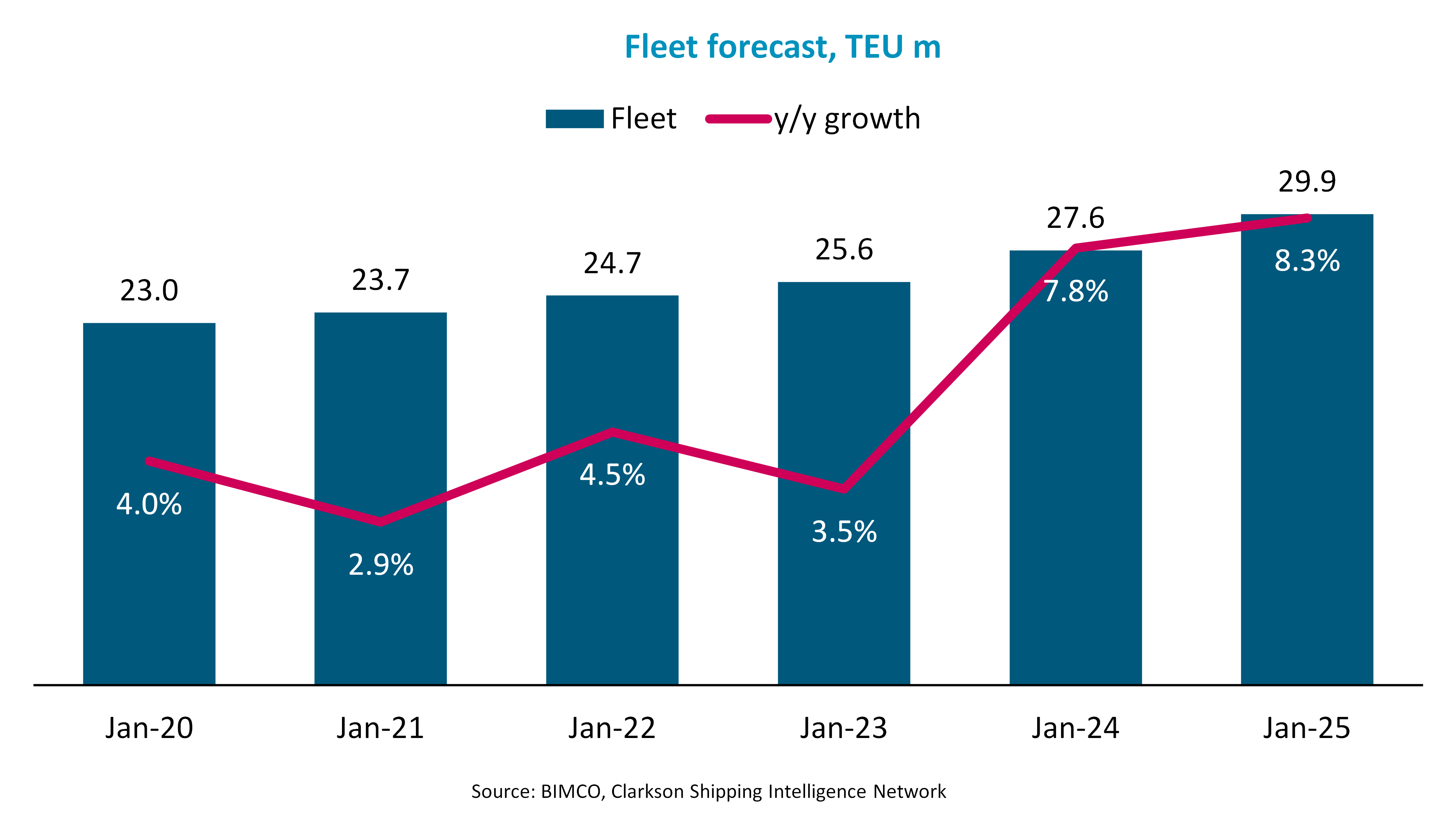 Reduction in congestion levels and the implementation of EEXI and CII regulations will meantime have a major impact on fleet efficiency and capacity supply in 2023.

Considering that head-haul volumes are significantly lower at present, we expect the remaining excess congestion to clear by early 2023 at the latest, and on average increase capacity supply in 2023 by around 10% vs. 2022. EEXI and CII regulations will instead reduce capacity supply. Maersk has announced that they are likely to need 5-15% more ships, while Hapag-Lloyd estimates an increase of 5-10%, and MSC estimates one of 7-10%. The effects of congestion and EEXI and CII implementation therefore appear likely to balance each other out in 2023, whereas further impact on deployment in 2024 is unlikely.

As demand prospects are muted, the ship supply will grow significantly faster than demand, and we forecast that the supply/demand balance will worsen in each of the coming two years. If our predictions are correct, the imbalance between ship demand and ship supply could grow by about 1 million TEU in both 2023 and 2024.

Liner operators can be expected to lay-up ships and redeliver excess charter ships to owners as soon as possible. It is therefore not unlikely that time charter rates will continue to fall and eventually approach owners’ operating costs for several ship sizes and rate levels that we last saw in early 2019. In such a market, charter periods should also reduce further.

Second-hand prices follow time charter rates and must be expected to follow the same predicted downward trend. As EEXI and CII regulations are introduced in 2023, we consider it likely that price premiums for more fuel-efficient ships will increase in both the second-hand market and the time charter market.

The freight rate market can be isolated from the developments in the time charter and second-hand markets. However, this is reliant on liner operators closely matching capacity on their regularly scheduled services to cargo demand and countering temporary seasonal market downturns by blanking sailings. If operators want to avoid a return to 2019 rate levels, ship capacity utilisation in the market cannot be allowed to fall much below 95%. If utilisation does fall below this figure, we believe that operators may continue to chase the last marginal boxes to fill the ships, which will inevitably lead to further rate reductions.

The newbuilding market is not directly connected to the developments in the other markets, but prices can still come under pressure if contracting across all ship sectors is not sufficient to replace the high number of container and LNG ship deliveries planned for the coming years. To avoid the possible price pressures that could follow from a lower orderbook, the shipyards will be hoping that bulker and tanker owners return to the newbuilding market.

All in all, our review and projections of market conditions do not bode well for neither operators nor owners. Unfortunately, the IMF’s forecast of the global economy holds mostly downside risks, and potential cargo demand upsides are hard to find. Nevertheless, the global economy and cargo demand have provided welcome surprises in the past and perhaps they will do so again. More specifically, increased ship demolition and delayed delivery of contracted ships could help lessen the weakening of the supply/demand balance. 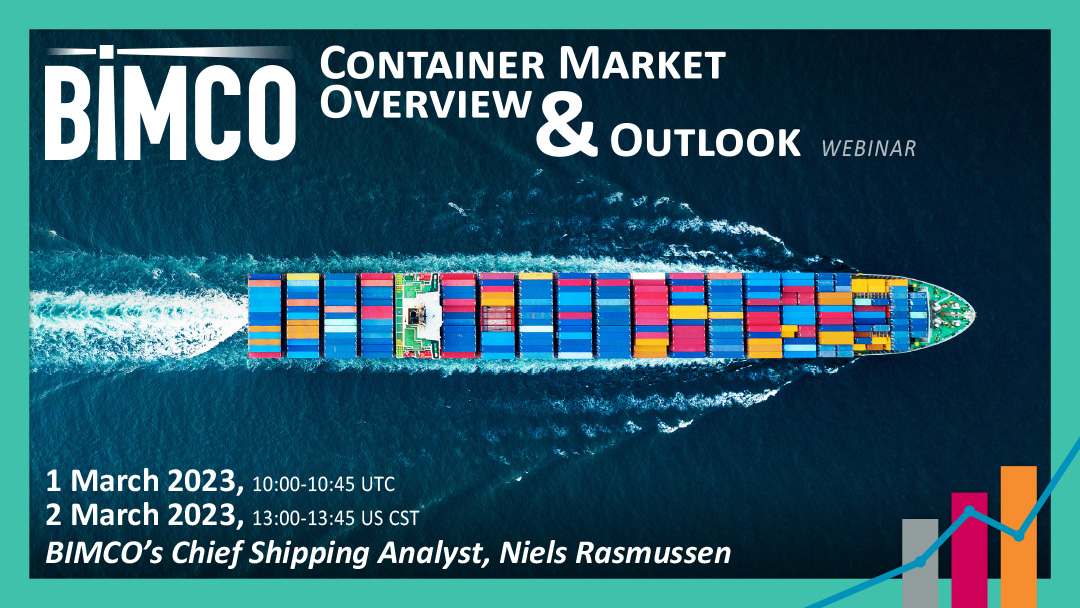