RECORDED WEBINAR: The market has started on the path to “normalisation”

The Shanghai Containerized Freight Index (SCFI), which represents spot rates for containers loading in Shanghai, enjoyed a period of almost uninterrupted growth between late May 2020 and mid-January 2022. At the end of the run, the index had increased by 491%. It has since dropped by 50% but remains at what would have been unprecedented levels prior to COVID 19. The China Containerized Freight Index (CCFI), which reflects the average rates of all containers loaded in China, increased by 326% during the same period and equally remains at unprecedented levels despite recording a subsequent 19% loss. While container rates have disappointed in 2022, they certainly are not disappointing.

Container volumes in head-haul and regional trades during the first half of 2022 fell by 0.2% y/y but remained 8.0% ahead of the pre-COVID volumes recorded in 2019. This slight drop in volumes compared to 2021 cannot explain the large-scale corrections seen. We must instead turn to the supply side for an explanation. On one hand, the fleet has continued to grow, while on the other hand, congestion has played less of a role so far in 2022, though it remains an issue, and capacity supply has increased while demand has slowed slightly.

Time charter rates and prices for second-hand ships have followed the same trend as the SCFI and CCFI. Average time charter rates for a 6-12 month period have fallen by 6.0% since peaking in early April. Prices for five-year-old ships have on average reduced by 5.3% since April, but on average remain 34.7% more expensive than newbuildings. This indicates that there is still a willingness in the market to pay a significant premium to secure ships now, though it must be said that sales and purchase activity have fallen. 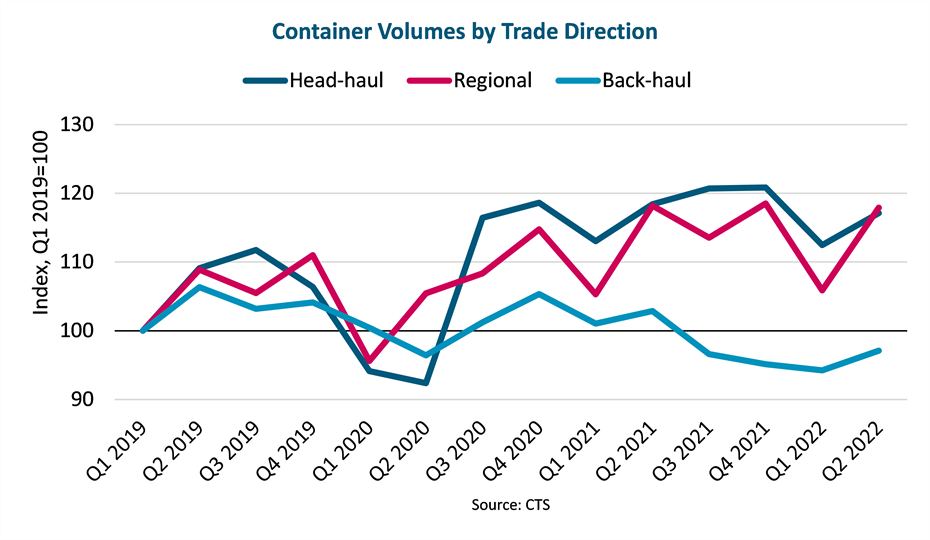 Overall, the container market remains very strong despite small setbacks to rates, prices, and volumes. However, headwinds in the global economy, with very high inflation, increasing interest rates, and lower growth can still be felt. Head-haul and regional volumes to Europe and the Australasia & Oceania region fell by 7.3% y/y and 12.5% y/y respectively in Q2 2022, while volumes into North America grew by 1.0% y/y only.

The International Monetary Fund (IMF) has again lowered its forecast for the global economy. Central banks have raised interest rates and tightened their monetary policies in an attempt to contain further increases in inflation, while the IMF estimates that global GDP in Q2 2022 was lower than in Q1 2022. The baseline growth forecast from July estimates global economic growth of 3.2% in 2022, down from 6.1% in 2021, and that growth will stand at 2.9% in 2023. Further downside risks exist, and the IMF’s worst-case scenario forecasts a possible further reduction in global GDP to 2.6% and 2.0% in 2022 and 2023 respectively.

The EU and the US are expected to see slower growth than initially expected. The growth projection for the EU now stands at 2.8% and 1.6% for 2022 and 2023 respectively, whereas growth in the US economy is estimated at 2.3% in 2022 and 1.0% in 2023, down from 5.7% in 2021. However, in other key demand areas such as Latin America & Caribbean, Sub-Saharan Africa, and Middle East & Central Asia, prospects for economic growth over the 2022-2023 period remain unchanged since the IMF’s April forecast.

India is still forecast to be the fastest-growing major economy despite reduced growth forecasts of 7.4% and 6.1% for 2022 and 2023 respectively. In China, slow domestic demand following large-scale COVID lockdowns as well as global headwinds can be felt, and growth is projected to be the slowest since 1990 at 3.3% and 4.6% for 2022 and 2023 respectively.

As mentioned, the effects of global economic headwinds are also becoming clearer in the container market. The customary Q3 peak season in the all-important head-haul and regional trades looks to be almost non-existent in 2022, and it appears that demand is being affected by several factors. Several reports detail how many low-income families worldwide are struggling to pay their rent and electricity and heating bills. In addition, many appear to be taking on more debt to cope with rising prices, with credit card debt in the US growing at its fastest rate in 20 years during the last 12 months. Spending on services continues to account for an increased share of total spending. Finally, it appears that an inventory correction may be taking place among some retailers, with Walmart and Target in the US reporting that they are overstocked compared to current sales. 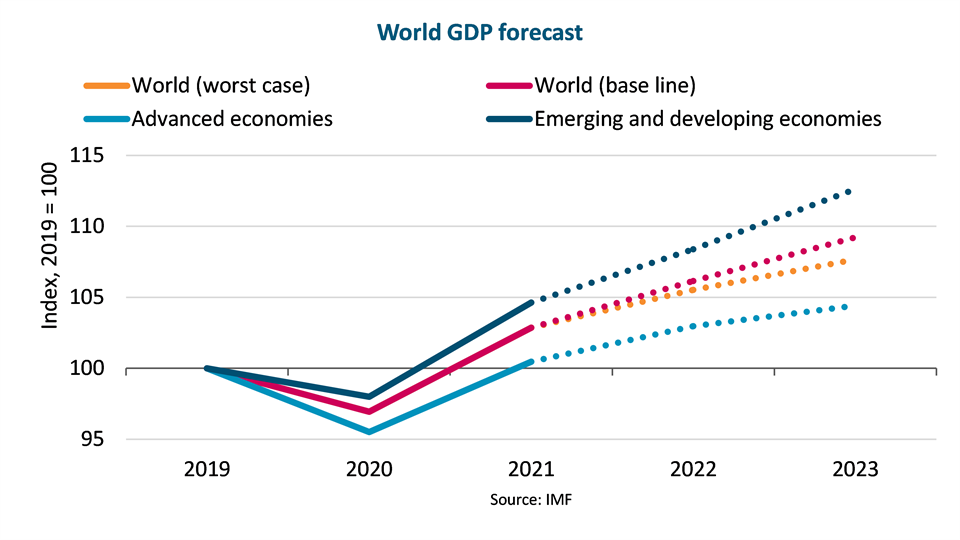 All in all, our calculations indicate that head-haul and regional trade volumes could fall by between 1-2% in 2022 and then grow by 3-4% in 2023. A 12% year-to-date fall in the value of the EUR/USD exchange rate is a concern for buying power in Europe, while lower economic growth than that forecast by the IMF is equally a significant risk. 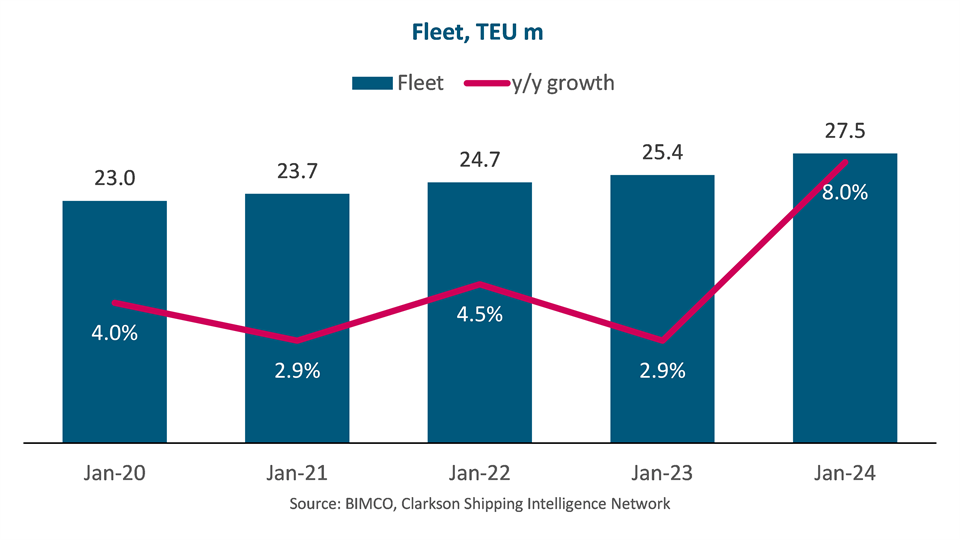 Even though contracting has slowed down from an average of 358,000 TEU/month in 2021 to 248,000/month in the first seven months of 2022, the order book has still increased by 1.2 million TEU since the beginning of the year and now stands at 7.0 million TEU, equivalent to 27.6% of the trading fleet. The resulting deliveries will greatly impact the fortunes of the container market over the next few years as about 5 million TEU will be delivered during 2023-3024.

No container vessel has been demolished so far this year, but we do expect demolition activity to resume during the rest of the year and to take place in 2023. We expect it to be in the 200,000-300,000 TEU/year range, possibly higher if owners decide to demolish ships instead of paying for retrofits to comply with EEXI.
Our total fleet growth estimate stands at 2.9% for 2022 and 8.0% for 2023. Combined with growth of 2.9% in 2020 and 4.5% in 2021, the rate of fleet growth has exceeded head-haul and regional volume demand when compared to pre-COVID levels. Congestion has meantime remained a drain on capacity supply; recent strikes in North Europe and a shift of US West Coast volumes to the East Coast have kept this very much alive. According to Sea-Intelligence, congestion peaked at 13.8% of the fleet size in January 2022 but had fallen to 9.6% by May 2022.

Congestion is likely to continue to be a driver of vessel demand and capacity supply for a while, but from 2023, the implementation of EEXI will likely be a more significant factor where vessel demand is concerned. In our last report, we estimated that EEXI could result in a 5% increase in vessel requirements due to lower sailing speeds. Since then, Maersk has announced that they are likely to need 5-15% more vessels, while Hapag-Lloyd estimates an increase of 5-10%. Congestion could dissipate in 2022 or by spring 2023 at the latest. Reports are indicating a drop-off in volumes to the US, while an apparent reduction in truck utilisation rates would help to clear congested container yards. In North Europe, recent strikes have temporarily worsened the problem, but if the lower year-to-date volumes continue during the rest of 2022, then relief should also be seen here.

All in all, if we assume that:

Then we can conclude that the fleet supply/demand balance will worsen in 2023 and lead to lower time charter rates and second-hand prices.

Global economic headwinds are adding many risks to container demand and upsides are difficult to identify. Consequently, we consider our present head-haul and regional volume growth estimates of 1-2% reduction in 2022 and 3-4% growth in 2023 as best case.

We therefore envisage a certain degree of “normalisation” during 2023, with much less congestion and reduced vessel delays. While we predict a reduction in freight levels, we do not think that these will revert to the very low pre-COVID levels.