Recovering demand for US oil products has caused a 25.9% rise in US seaborne imports of oil products in the first seven months of 2021 compared to 2020, with imports so far this year totalling 26.1m tonnes.

The highest increase has been recorded from the largest supplier of US seaborne oil product imports, Europe, from which with imports are up 49.8% compared with last year.

Despite the impressive growth rates, total volumes are still down by 19.1% from the first seven months of 2019, which in volume terms translates to a 6.2 million tonne drop. Compared to 2019, Europe is the region which has recovered most of its 2020 losses, down 8.5% in the first seven months of the year (-1m tonnes). The largest difference between 2021 and 2019 levels comes from oil product imports from Russia which are down 1.7m tonnes (-38.2%). 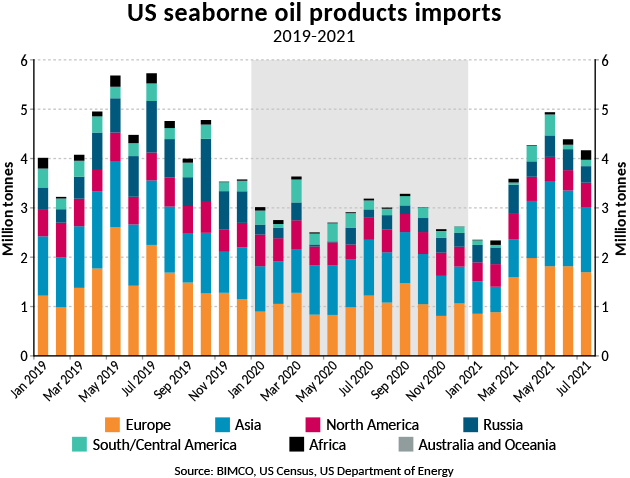 Due to Rotterdam’s status as a large trading hub, the Netherlands is the single biggest origin for US seaborne oil product imports, totalling 3.3m tonnes in the first seven months of this year, a 20.2% increase from 2020 but still just under 0.5m tonnes from pre-pandemic 2019 levels. According to Signal Group data 131 ships have sailed from the Netherlands to the US East Coast, the majority of which (81) are MR2s.

The biggest exporters to the US of oil products from Asia are South Korea (1.7m tonnes in the first seven months of 2021), India (1.4m tonnes) and Saudi Arabia (1.3m tonnes).

Higher volumes have not resulted in a significant increase in freight rates which, despite the 49.8% growth in volumes between Europe and the US, are still below last year’s levels. In fact, earnings on the Rotterdam to New York trade for a clean MR1 tanker (37,000 tonnes) fell to their lowest level since July 2014 to just USD 613 per day on 17 September. At no point this year have earnings on this trade been above USD 11,000 per day, compared to average earnings of USD 13,315 per day in 2020, in part driven by the spike in daily earnings in May 2020 when they topped at USD 76,384. 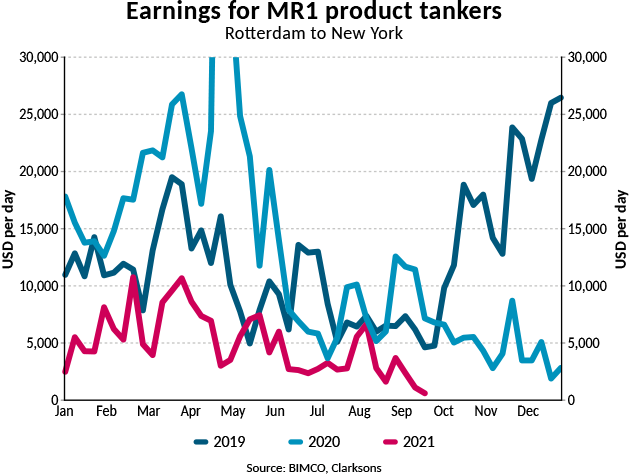 The lower freight rates despite higher volumes underlines the global nature of shipping, with the poor conditions in the rest of the tanker market keeping a lid on potential earnings on this trade.

Providing support to the recovery in US oil product imports is the recovery in US demand for oil products, in particular as domestic production has been slower to recover than demand. In the first three weeks of September, average products supplied in the US was 20.3m bpd, including 9.1m bpd of gasoline. This is a 12.7% increase in total products supplied compared with the same three weeks in 2020, and down just 3.0% from the corresponding period in 2019. Gasoline supplied is down 2.5% from the start of September 2019 after a 7.9% increase from 2020.

Discounting recent disruptions to US crude oil production from Hurricane Ida in August 2021, the US produced an average of 11.4m bpd, down from 12.4m bpd in August 2019 (-7.8%). A similar gap between today’s and pre-pandemic levels can be found in US refinery throughput, which in August this year averaged 16.1m bpd, down 8.3% from August 2019.

“After many months with average crude oil production of 11m bpd, US producers had begun to scale up until the recent hurricane-related disruption sent production back down. Barring the recent fall, the uptick in US crude oil production had seen a slow start compared with the recovery in domestic demand. This caused a drawdown of stocks built up at the height of the oil price war, and higher oil product imports, bringing extra volumes to tanker shipping, but doing little to help freight rates,” says Peter Sand, BIMCO’s Chief Shipping Analyst.

BACK TO: US trade balance with China improving on higher exports NEXT: Container shipping - onshore disruption leading to record delays and profits