Demand drivers and freight rates
A recent small and short spike in oil product tankers shows just how far the tanker market still has left to go on its recovery journey.

LR2 earnings rose to USD 26,823 dollars per day on 26 March as the Suez Canal blockage sparked fears of reduced available tanker shipping capacity in the key export region in the Arabian Gulf. They have since fallen to USD 12,925 per day on 21 May. The smaller oil-product tankers saw an even smaller increase, with LR1 daily earnings rising to USD 15,622, MRs getting to USD 12,432, and Handysizes reaching USD 17,417.

Even with these recent peaks, average earnings for all product tankers so far this year have been between USD 9,168 and USD 10,334 per day – far from break-even levels and between 2½ and 4 times lower than average earnings in the first five months of 2020. 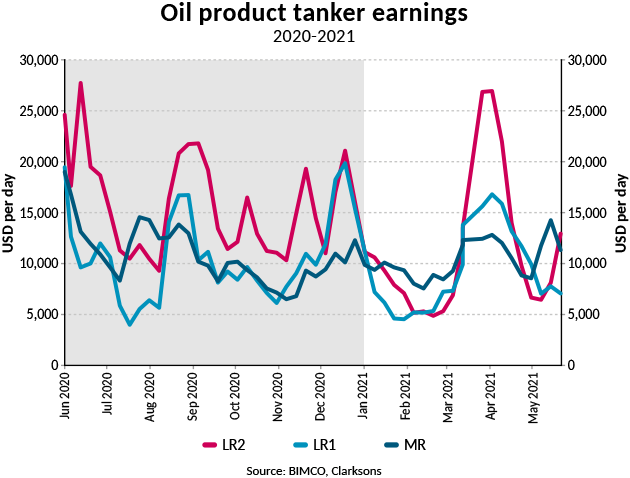 Even the modest spike in oil product tanker earnings looked good compared with earnings for Very Large Crude Carriers (VLCCs)s. The benchmark 270,000-tonne ship going from the Persian Gulf to China had been earning less than USD 3,000 per day between mid-January and mid-May, though on 26 May daily earnings had risen to USD 3,707. On an aggregated level, VLCCs have fared slightly better than on that specific trade, earning an average of USD 12,302 per day between the start of April and mid-May. This was only slightly higher than average earnings for both Suezmax and Aframax ships; these averaged USD 9,437 and 11,712 per day, respectively.

During the first COVID-19 wave, the health crisis led to lockdowns and harmed economic activity but, despite the current resurgence, it is unlikely economic activity will be affected to the same extent. This time, the restrictions are more local and not as strict, even though, from a health point of view, the situation is much worse. The first lockdown caused Indian refinery throughput in April 2020 to fall to 14.8m tonnes, down from 20.7m in April 2019. The throughput had recovered to 21m tonnes in March 2021 but fell back to 19.9m tonnes in April.

As the fall in April 2021 was much lower than that in 2020, after the first four months of the year accumulated crude oil throughput in India was up by3.2% from 2020, with 81.3m tonnes being processed, resulting in 85.3m tonnes of petroleum products. This processing gain is achieved because the products are less dense than the crude oil used and therefore more voluminous.

In the 12 months from April 2020 to March 2021, a total of 221.8m tonnes of crude oil was processed in India, a 12.8% drop compared with the previous fiscal year. While India also produces its own crude oil, this amounted to 30.5m tonnes between April 2020 and March 2021, just 13.8% of the total processed, highlighting Indian refineries’ dependence on imports.

Not only is India highly dependent on crude oil imports, but it has become dependent on a few key sources, with the top three – Iraq, Saudi Arabia and the United Arab Emirates – accounting for 54.4% of its total imports in 2020. However, in response to the OPEC+ cuts and the resulting higher oil price, Indian refineries have been asked to diversify their sources. This provides a potential boost to tonne miles generated by Indian imports. US crude oil export has seen the biggest boost so far this year caused by the fall in Indian imports from OPEC+. US exports to India grew by 73.9% in Q1 2021 compared with 2020, reaching 4.9m tonnes.

In 2020, only two of the top 10 biggest sources of crude oil were non-OPEC+: USA and Mexico, both of which are considerably further away from India than the majority of OPEC+ countries. 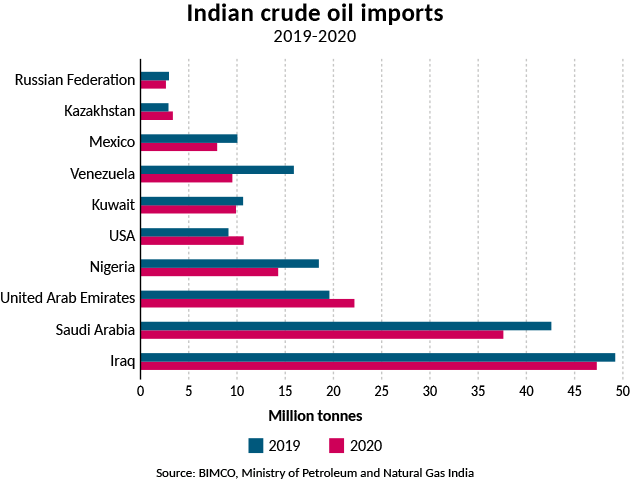 This comes even as the OPEC+ alliance agreed to ease its supply cuts, albeit gradually. Crude oil production is set to increase by 600,000 barrels per day (bpd) in May, 700,000 bpd in June and 850,000 bpd in July, leaving total production cuts in July at 6.1m bpd. This includes the extra production from Saudi Arabia as it winds down its voluntary cut of 1m bpd. The gradual rollback shows the alliance’s caution with regard to the recovery in global oil demand.

In terms of global refining activity, the pandemic has accelerated the shift towards Asia. In the first four months of the year, average refinery throughput in China has been marginally higher than that in the US. The former has had an average throughput of 14.17m bpd compared with the 14.08m bpd in the latter. This marks a turnaround from the first four months of 2019 when the US processed an average of 16.3m bpd compared with China’s 12.7m. In April, the vaccine and stimulus-driven recovery in the US led it to re-claim the top spot when it processed 14.97m bpd –its highest level since March 2020. Despite this return to the status quo, the gap between the two largest refiners in the world is unlikely ever to return to its pre-pandemic size. 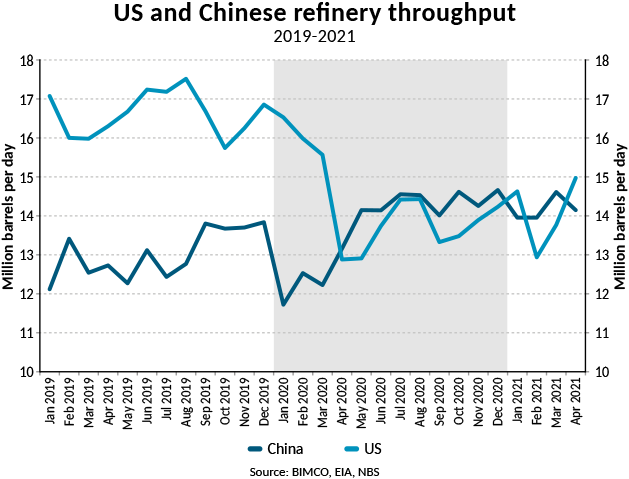 China was one of the few economies that saw its refinery activity grow in 2020, but the 14.2m bpd it processed in Q1 2021, was still a drop from Q4 2020, as the Lunar New Year closed some manufacturing activity and travel restrictions were tightened to avoid COVID-19 cases spreading over the holiday. Despite the fall in refinery throughput, crude oil imports have been strong, starting the year up by 7.1% on the first four months of 2020, reaching 179.6 million tonnes.

Despite the poor market conditions, with money in the bank from last year’s boom, crude oil tankers have proven popular at the shipyards. In total, 44 new crude oil tankers have been ordered year to date. More than half (27) are VLCCs, with an average capacity of 303,000 Dead Weight Tonnes (DWT). They are slated to be delivered in the Q4 2022 and throughout 2023.

Oil product tankers have proven less popular: some 36 have been ordered in the period, 28 of which are MR tankers.

With deliveries of 16.3m DWT of crude oil tankers and 6.1m DWT of oil product tankers, almost half of which have been delivered, BIMCO expects the fleets to grow by 2% and 2.1%, respectively this year.

Demand for international travel remains subdued as the pandemic continues to rage in many corners of the world and border restrictions are imposed to limit the spread of virus variants. Globally, airline seat capacity is 41.3% lower this May than in May 2019, although this hides stark differences. In North East Asia, seat capacity is down 12.2%, driven primarily by the recovery in domestic travel in China, while in Western Europe seat capacity is down by 73.5% from May 2019. However, in parts of the developed world, a lifting of restrictions is seeing a recovery in demand for oil products. More and more people are returning to their daily commutes – either to schools or workplaces – leisure activities are re-opening and leisure travel is opening up.

In the US, the Energy Information Administration forecasts that, between June and August, national demand for oil products relating to travel will increase from last summer, but still be below 2019 levels. Demand for motor gasoline, distillate fuel oils and jet fuel are forecast to average 14.5m bpd in the summer months, up from the 12.9m in 2020, but not yet back at the 15.5m bpd of the summer of 2019. 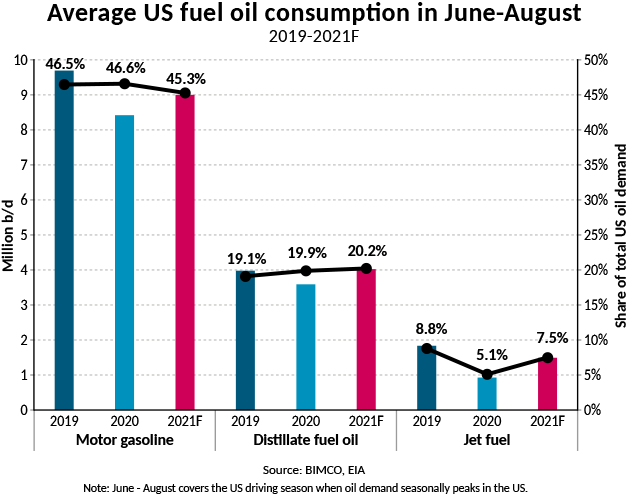 Globally, the International Energy Agency (IEA) forecasts that global oil demand in 2021 will reach 96.4m bpd, 3.3mbpd below 2019 levels, but up 5.4m on 2020, though with plenty of downside risks still lurking.

As has been the case in recent years, the largest growth will come from the non-OECD Asia, which the IEA expects will see a 2.2m bpd increase in its demand compared with 2020, becoming the only region to exceed its 2019 oil demand this year.

The IEA expects that it will take until 2023 before global oil demand exceeds pre-pandemic levels, though with 2022 demand expected to come in at just 0.3m bpd lower than 2019 levels, not much would be needed to push it back above the 99.7m bpd of 2019.

Suppressed demand and plenty of risks threatening the recovery means tanker shipping companies are in for another tough year, in which the profits made last year will be drawn upon to get through this one. The war chests that have been built up will also limit the number of ships being sent for demolition, with owners preferring to keep their ships sailing in the hope of better times ahead.

BACK TO: Around the world in seven shipping records NEXT: Container shipping: Records keep falling as industry enjoys best markets ever