Strong starts to the year for the high-volume commodities of iron ore and coal – thanks to infrastructure-heavy stimulus in some parts of the world – as well as plenty of agricultural exports, have all contributed to the record-breaking start, with strong volumes clearly reflected in dry bulk earnings.

So far, Capesize earnings are on track for the best month of May since 2010, with a daily average of USD 36,536 per day, more than 9 times that of May 2020. The current strength of the market is only underlined by comparing current earnings to peak seasons in past years. The last time average earnings in Q4 were above even USD 25,000 per day was in 2013, and to get above May’s average so far, you have to go back to Q2 2010.

The rest of the market is also delivering strong profits to owners and operators, with Panamax earnings standing at USD 24,903 per day and Supramaxes USD 27,413 per day on 26 May. Even for a 38,000 DWT Handysize ship, earnings are above USD 24,000 per day. 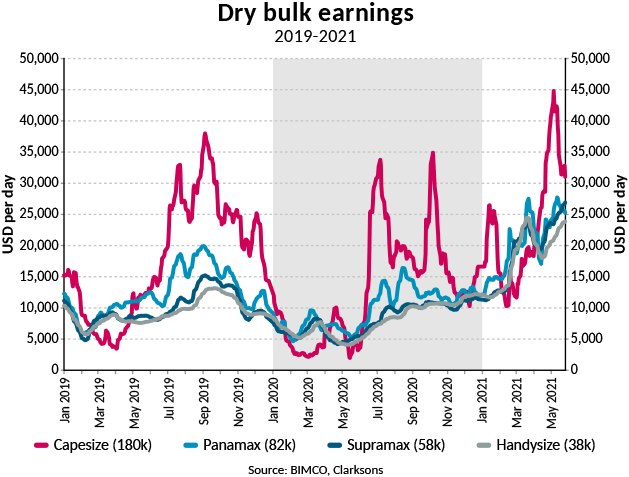 Just as freight rates are up for all ship sizes, the appetite for cargo transport has increased across the board. Supramaxes are the biggest winners, with demand for these soaring by 10.6% in the first four months of this year, compared with 2020. Capesize demand rose by 6.0%, while Panamax edged up 1.5%. Demand for Handysize ships grew the least compared to its pre-pandemic level, up just 0.1% from the first four months of 2019, despite 7.3% growth from the start of 2020. 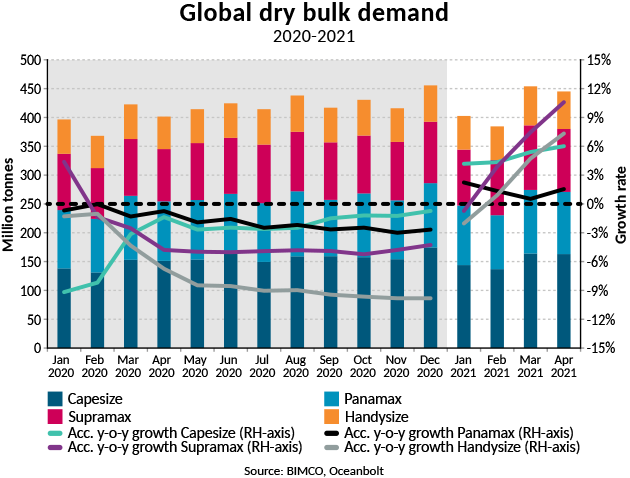 The recent strong growth in demand for Panamax and Supramax ships has largely been driven by agricultural goods, with record exports and imports being registered across the world. Chinese imports of agricultural goods have risen strongly, with coarse grain and wheat up by 155.2% in the first four months of the year – a total of 19.1 million tonnes, compared with last year’s figure of just 7.5m tonnes. China has upped its purchase of grains, not only to feed its growing pig herd but also to build up a stockpile in response to the vulnerabilities revealed over the past year.

While Chinese soya bean imports have grown less, but from a higher base – 16.8% up from last year’s first four months – in volume terms they have risen by 4.1 million tonnes, reaching a record high of 28.6 million tonnes. This is largely down to record-high exports from the US that, because of delayed Brazilian soya beans, didn’t reach China in any meaningful volumes until Q2.

However, since then, Brazilian soya bean exports have broken monthly records for March and April, the latter hitting 17.4m tonnes. This more than makes up for the low exports of January and February, after which exports were down 56.4%, compared with the start of 2020. Comparing the four-month period, the comeback is complete, with volumes now up by 3.9%.

This slow start to 2020, followed by record-high exports, has provided great support for the dry bulk industry, first by keeping ships stuck outside of ports waiting for loads, and then in March and April, requiring much more tonnage than in previous years. In just those two months alone, 64 more Panamax ships were needed to cover Brazilian exports than in 2020. 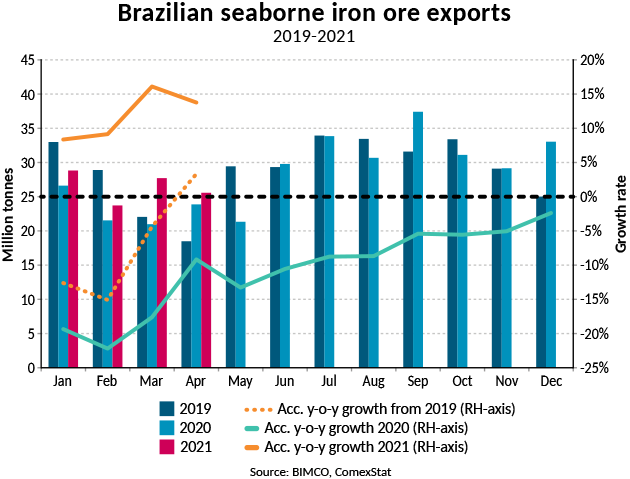 A high iron ore price encourages exporters to sell as much as they can. This is clear in the growth in Brazilian iron ore exports, which has outpaced that of the product globally. However, the latter has still grown by 5.6%, reaching 497.1m tonnes in the first four months of the year (source: Oceanbolt). Though up on both 2020 and 2019, this level is still slightly below the record high 498.8m tonnes transported by sea in the first four months of 2018. That said, those volumes did little to help Capesize freight rates in 2018, which averaged USD 12,660 per day in the first four months of that year. The difference this time: higher iron ore prices and stronger demand from other dry bulk markets driven by pandemic-induced spending.

With 89.7% of total seaborne iron ore trade happening on Capesize ships, this alone accounted for just under three-quarters of the growth in demand for Capesize ships in the first four months of this year.

The dry bulk ship sale and purchase market has also been riding high these past few months, reflecting the strength in the freight market. Since the start of the year, the value of a 15-year-old Capesize ship has risen by 73.4%. Smaller ship sizes were not far behind, with their value at 15 years increasing between 54.4 and 59.6% from 1 January to 25 May (source: VesselsValue).

So far this year, 81 deals have been done in the second-hand market, two-thirds of which were Panamax and Handymax ships.

The increased demand for second-hand ships reflects shipowners desire to get their hands on more tonnage immediately, with the rush of activity here not reflected in higher contracting; that has fallen when compared with the start of 2020. Year to date, 92 ships have been ordered (versus 111 in the same period of 2020), with Panamax ships proving the most popular as 44 of them have been ordered. 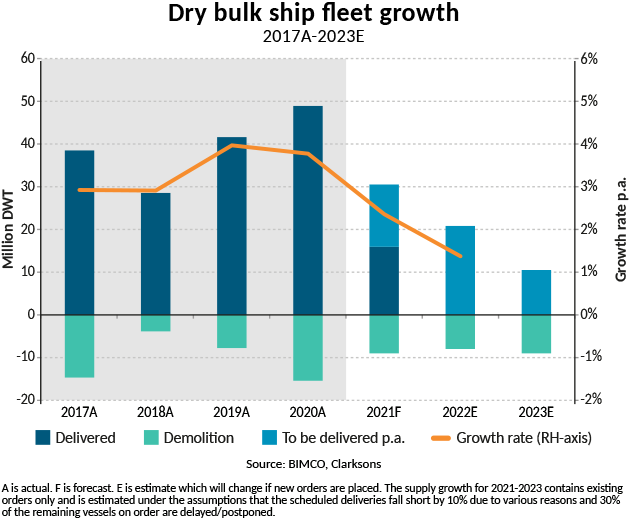 Of the 30.1m DWT expected to be delivered this year, just 16m DWT has already arrived, compared to demolitions of 4.2m DWT. This leaves the fleet at 923.9m DWT, 1.3% up from the start of the year. In the full year, BIMCO expects the fleet to grow by 2.4%, with demolitions likely to reach around 9m DWT. This will be the slowest fleet growth since 2016.

So far this year, coal demand has developed differently across the shipping segments. Almost half of all seaborne coal trade happens on Panamax ships where volumes in the first four months of this year fell by 3.6%; meanwhile, coal demand on Capesize ships grew by 6.5% (source: Oceanbolt).

Demand for coal is increasingly coming under scrutiny, especially following US President Joe Biden’s Climate Summit and in the lead up to the COP26 climate summit in Glasgow, which is expected to be held in November. Despite this, concrete targets were few and far between when it came to the largest coal consumers.

At the Biden Climate Summit, China announced its coal consumption would continue to grow over the next five years, albeit at a more limited rate. It then committed to peak its coal consumption in the next five-year plan that runs between 2026 and 2030. With imports making up only a small part of total consumption, given China’s large domestic production, it will be up to the Chinese to decide which source they want to cut down on first. Even if imports are the first to go, a sudden drop is not just round the corner.

Also included in China’s new five-year plan is an increased focus on technology and high-value manufacturing. This indicates a move away from the more traditional construction and heavy industry sectors, potentially lowering demand for some Chinese dry bulk goods over the next few years.

Muddying the water is the deteriorating relationship between China and Australia, although the iron ore trade between the two nations looks to be protected as both are highly dependent on it.

India, the second-largest coal importer, offered even fewer targets on its path to decarbonisation. Coal and lignite feeds 54.7% of the country’s current installed power generation capacity. Other than a pledge to increase its renewable energy capacity by 450 gigawatts by 2030, there was little talk of limiting coal consumption or imports at the Biden summit.

Despite the current strength of the dry bulk market, fundamentally little has changed, with high demand primarily being driven by short-term factors linked to pandemic-related stimulus spending and stockpiling. This means that, even though volumes are currently strong and the orderbook relatively low, BIMCO is not holding its breath for the next supercycle to begin.

Whatever happens in the longer run, the strong start to this year has padded dry bulk owners’ and operators’ bottom lines, and with continued strong demand for many of the major dry bulk goods, this year looks set to be one to remember.