Tonne mile demand generated by US crude oil exports has fallen by 9.7% in the first two months of 2021 compared with the start of 2020.

The fall could however have been much worse; In volume terms, seaborne crude oil exports have fallen by 18.8%, to 20.9m tonnes, a 4.8m tonnes decline compared with last year, according to data from the US Census Bureau.

While seaborne crude oil exports to all regions have fallen, those to Asia are among the least affected, down just 1.0%, or equivalent to one Aframax load (101,088 tonnes). As sailing distances to Asia are much longer than those to the rest of the world, the smaller drop in exports to these countries explains why exports have fallen less when measuring seaborne shipping demand in tonne-miles than measured in tonnes.

This analysis takes a look at the developments in US crude oil trade as well as in domestic consumption and production, and how these will affect the tanker shipping industry.

Looking closer at exports to Asia, only three countries have seen higher imports this year than last, and only two of them have seen meaningful growth: China and India. In the first two months of 2020, the US didn’t export any crude oil to China, only to see its exports grow during the rest of the year and end up by 22.1% compared to 2019. Growth has continued this year with US crude oil exports totalling 2.5m tonnes in the first two months (13 200,000 tonne VLCC loads). 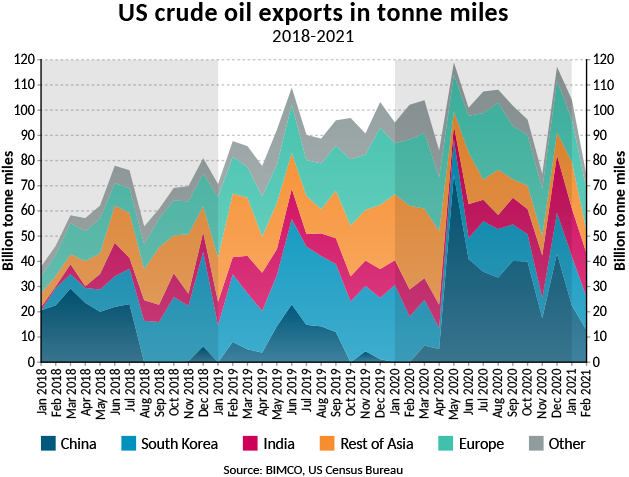 The 0.9m tonnes of crude oil exported to China in February was the lowest monthly export since April 2020, and significantly down from the 2.8m tonnes exported in December 2020 which was behind a steep rise in total US exports that month.

“Geopolitics are part of the reason behind the strong growth in exports to China and India while exports to the rest of the world are falling. Since the second quarter of 2020, China has been buying US crude oil as part of the Phase One agreement between the two countries, but remains far behind the targets that were set out,” says BIMCO’s Chief Shipping Analyst, Peter Sand.

“India on the other hand is looking to diversify its imports of crude oil to become less dependent on the OPEC+ alliance in a move that reflects India’s dissatisfaction with the Saudi-led crude oil supply cuts,” Sand says.

“Whatever the reasons, higher imports from the US to China and India, especially if they replace Middle Eastern crude oil, are great for tanker shipping demand,” Sand adds.

The other Asian country to increase crude imports from the US is Japan. Despite a high growth rate of 25.3%, exports have risen from only71,811 tonnes to 89,987 tonnes, meaning that for shipping the only change is a slightly larger ship is needed. In the whole of last year, six ships sailed from the US with crude oil to Japan, carrying an average load of 126,758 tonnes.

So far this year, the US has thereby exported 4.2m more tonnes than it has imported by sea, continuing the trend from 2020, which was the first full year in which the US was a net seaborne exporter of crude oil. In 2020, seaborne exports totalled 142.2m tonnes while seaborne imports amounted to 123.9m tonnes. This follows a multi-year trend in which the gap between imports and exports has been narrowing, following the growth of shale oil extraction in the US.

Including non-seaborne imports, which adds large volumes of crude oil imports from Mexico and Canada, data from the US Energy Information Administration (EIA) shows that US crude oil imports have averaged 5.7m barrels per day (bpd) in the first three months of the year, the lowest start to a year since 1994.

Unlike many other countries, where new coronavirus restrictions have recently been implemented, the US is re-opening and seeing a speedy vaccine rollout, restrictions being lifted and latest stimulus package all contributing to getting the economy going again.

EIA data on petroleum product supplied shows it reaching the 2015-2019 average in recent weeks, as more people travel, on land and by air, and as schools, services and workplaces re-opening. In the week ending 2 April, US petroleum product supplied totalled 19.2m bpd, a 33.2% increase from the same week in 2020 which was at the height of the first US lockdown. Compared to the same week in 2019, products supplied was down 5.3%. 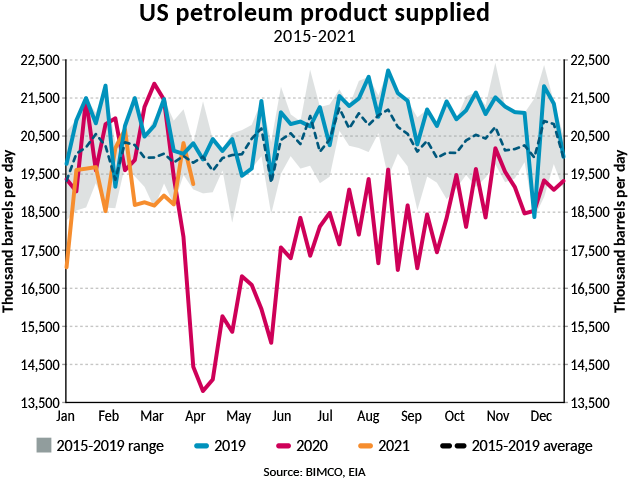 Unlike product supplied, crude oil production has been averaging around 11m bpd since mid-November, excluding recent weather-related disruptions. This compares to a pre-pandemic level of 13m bpd that was being produced in the first three months of 2020. 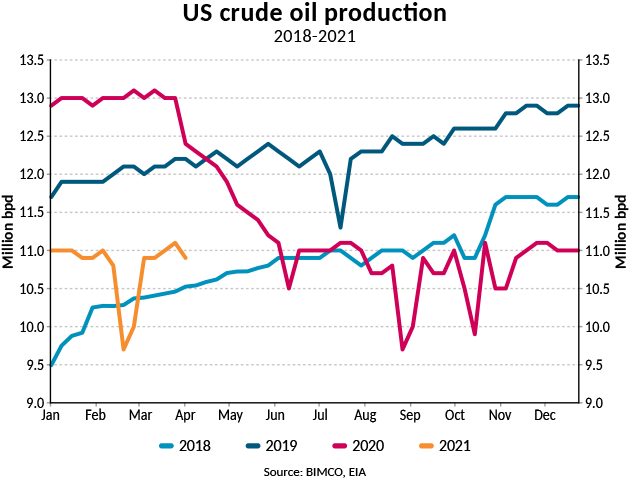 “The recovery in oil prices and gradual recovery in global oil demand means that US crude oil production will grow from its current level, although a return to pre-pandemic levels in unlikely until well into 2022, if at all. For tanker shipping, the higher the share of global exports that comes from the US, the better, given the longer sailing distances,” Sand says.

“However, with the OPEC+ alliance trying to find the balance between a high oil price and market share, the strong growth in US exports that has offered support to the tanker shipping industry since 2016, cannot necessarily be relied on going forward,” says Sand.

BACK TO: High-sulphur fuel oil sales rebound after pre-IMO 2020 correction NEXT: Pieces of the changed Eastern coal market puzzle fall into place