In many ways, shipping managed to dodge the worst bullet in 2020, as the nature of the crisis, its containment measures, and government stimulus around the world meant that global trade volumes were not hit as badly as global gross domestic product (GDP) or other even worse-performing sectors, such as services.

Overall, global seaborne trade volumes have recovered from their Q2 slump, though not for all sectors. Demand for tanker shipping is still lagging given that a full recovery in global oil demand remains a long way off.

Though GDP growth and world seaborne trade both fell last year, the trade-to-GDP multiplier, which had been on a downward trend since the 2000s, took an upwards jump, as other contributors to GDP fell by more than goods did. In fact, the trade multiplier rose to 0.8, a large increase from 0.32 in 2019, and back to the average from last decade. Unlike virus R numbers, in which low readings are good news, the higher the seaborne trade-to-GDP multiplier the better it is for shipping, with a number above 1 indicating that seaborne trade volumes are outperforming the rest of the economy. 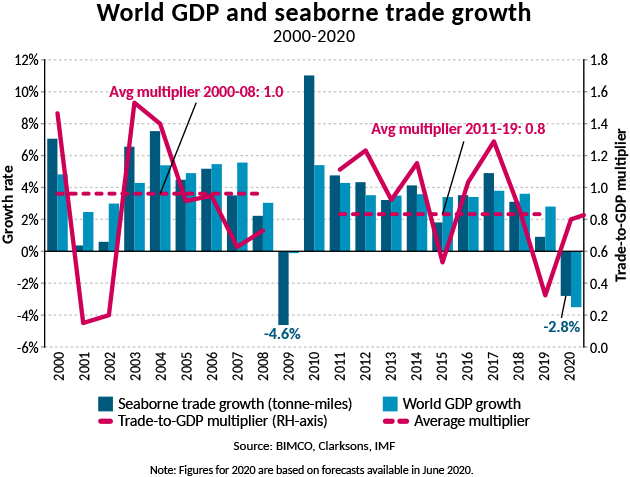 The IMF estimates that, in 2020, advanced economies accounted for 59.4% of global GDP, with emerging and developing economies taking a 40.6% share. The latter’s share has been steadily rising since the turn of the century, when it represented only 20.9% of global GDP.

However, Chinese growth must be taken with a pinch of salt, not only because of the validity reservations one should always have when looking at Chinese economic data, but also because of where this growth is coming from.

Before COVID-19 emerged as a pandemic, the Chinese government had announced that it wanted to increase the share of growth that comes from domestic demand, with this expected to be the focus of its next five-year plan, which covers 2021-2025. But 2020 ended up running contrary to this goal. Chinese stimulus in 2020 was primarily focused on the supply side, helping industry and exports to recovery, but leaving consumer spending behind. Industry, which in 2019 accounted for 31.6% of GDP, rose by 2.8% year on year, increasing its already high contribution to GDP. This kind of growth is very beneficial to shipping, as it requires raw materials to be imported – boosting mostly dry bulk shipping – and finished goods to be exported, mainly in container ships.

Both imports and exports reached record highs in December, with imports at USD 203.8 billion and exports USD 281.9 billion. Also at a record high in December was the trade surplus, which stood at USD 78.2 billion, in a year when we also saw a rare deficit of USD 62.1 billion in February. 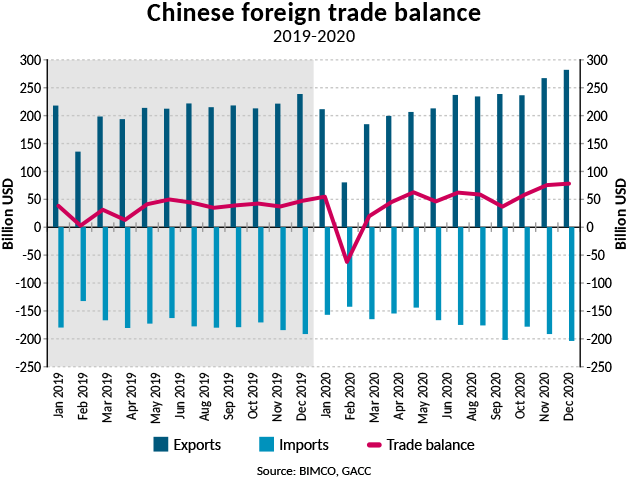 On the flipside, the slow recovery in Chinese retail sales of consumer goods, which ended 2020 down 3.9% from 2019, will probably have caused wholesale and retail’s contribution to GDP to fall from 9.7% in 2019 – leaving the Chinese economy even more imbalanced than before the pandemic. In India, the economic budget for the new year has been announced, which, at nearly USD 0.5 trillion, is a far cry from the emergency stimulus packages seen elsewhere in the world, and may not provide the support needed to redress the 8.0% drop in Indian GDP in the 2020/2021 fiscal year (1 April to 31 March). Instead, this budget proposes an increase in spending of less than 1%, but infrastructure, important for dry bulk shipping, will get a boost, with a particular focus on highway and road construction.

On a larger scale than the Indian stimulus, the Japanese government announced in December a further USD 708 billion in stimulus, bringing total coronavirus-related stimulus to around USD 3 trillion. Spending in this package will be focused on green and digital innovation, while also including measures to boost spending and domestic travel. The former could, potentially, add container volumes on the intra-Asian trade, but will not add to dry bulk demand in any meaningful way. In 2020, the Japanese economy fell by 5.1%, with the IMF forecasting growth of 3.1% this year.

Though they slowed down in Q4 2020, US retail sales performed well in the months after the initial lockdowns, ending the year up 3.4% from 2019. The fall and rise in retail sales are the reflection of US consumers’ disposable income, which, despite the crisis, ends the full year up by 6.3%, largely because of extra income from the government. As more stimulus seems to be on the way, this bodes well for container shipping in 2021. 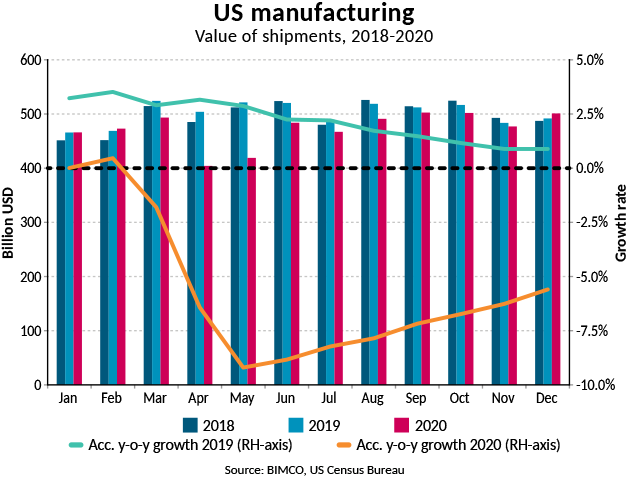 The fall in domestic manufacturing while consumers are buying more goods means higher imports, benefiting container shipping and driving the US trade deficit upwards, posting a record high of USD 904.9 billion in 2020. The trade deficit with China has, on the other hand, fallen from 2019, mostly driven by higher US exports linked to the Phase One Agreement between the two countries.

Despite rising COVID-19 cases in the fourth quarter, the US managed to avoid a double dip in GDP; instead, its economy continued to grow, albeit at a smaller pace. After a dip that saw quarter-on-quarter GDP fall by 9.5% in Q2, the Q3 recovery brought it up by 8.5 percentage points. A much smaller increase in economic activity in Q4 brought it a further 1.5 percentage points up, with the end result that GDP in Q4 2020 was down 2.5% from Q4 2019. In the full year, the US economy contracted by 3.5%, with the IMF forecasting a 5.1% increase in 2021.

Unemployment reached 6.3% in January, according to the Bureau of Labor Statistics – compared with 3.5% before the pandemic – and with 9.9 million fewer jobs now than in February 2020, another round of stimulus spending, already on the cards, is needed to support the American recovery. The new administration has proposed a further USD 1.9 trillion worth of stimulus spending, including more direct payments to Americans (USD 1,400), and extra unemployment benefits, which have been two of the big drivers behind the recovery in consumer spending, and a strong boost to container shipping, as seen clearly in the second half of 2020.

Compared with the US, government responses in Europe to rising COVID-19 cases at the end of 2020 were much stricter, and led the economy into a double-dip recession, putting it a step further back on its already long path to recovery. Over the full year, EU-27 GDP fell by 6.4% and the eurozone area GDP fell by 6.8% (source: Eurostat).

The IMF does not expect the eurozone economy to return to 2019 levels this year. Instead, it forecasts this milestone to be passed by 2022, with growth mostly being driven by smaller eurozone countries. Of the four major economies (Germany, France, Italy and Spain), only Germany will have grown from 2019 by 2022, and even that will only be by 1%.

With many restaurants, theatres, gyms and other services yet to be fully opened (and the outlook for this happening not seeming imminent), vaccine progress slow, and new variants speeding up transmission, Europe’s other core industries are driving the growth. Industrial production in the EU-27 posted month-on-month between September and November, though it fell again between November and December, leaving industrial production in December 2020 down 0.4% from December 2019, though some industries fared much worse. 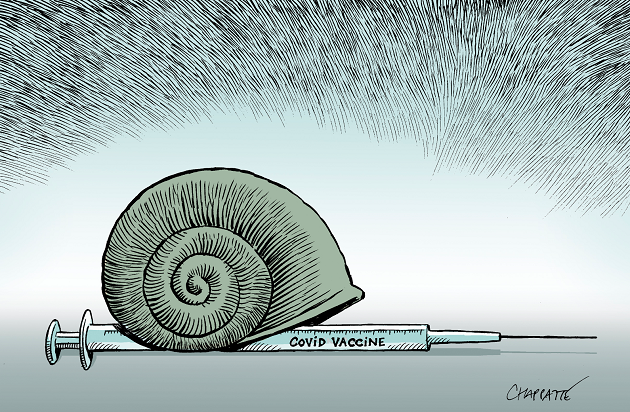 Retail sales ended the full year down from 2019: down 0.8% in the EU and 1.2% in the eurozone. After a recovery in retail sales in the summer, when shops reopened and consumers had money to spend – in large part because of government schemes – the second round of lockdowns sent total retail sales back into negative territory compared with 2019.

In Italy, they are dealing not only with the pandemic, but also with the collapse of the governing coalition. Mario Draghi, former President of the European Central Bank (ECB) has been called in to form a new government, and faces the unenviable task of steering Italy through the health and economic crises. The IMF estimates that the Italian economy shrank by 9.2% in 2020 and forecasts only 3.0% growth this year.

Now officially out of the EU, the UK fared worse, its GDP falling by 9.9% according to the Office for National Statistics. The last-minute deal that was signed at the end of December avoided a hard exit, at least in terms of goods trade, but it hasn’t meant a seamless transition, with importers facing supply chain disruptions as the new rules need time to be understood in practice.

The start of the post-pandemic world inches closer as new vaccines are approved and used; however, we are not there yet. The pandemic’s direct impact on the economy continues, and the after-effects will remain for many more years to come. The 2021 recovery will not bring good news for everyone, with the exact pace of the recovery to be determined by developments of the pandemic and changes to travel restrictions and other containment measures.

As the global economy moves towards its next normal, some of the positives that have come out of the pandemic year for shipping, including the higher trade-to-GDP multiplier, will fade away as spending on goods falls and consumers start spending more on services and travel. Furthermore, there will be a limit to government stimulus packages, which will inevitably slow the pace of recovery.

Along with the new year and new US administration, the temperature of global geopolitics has fallen a few degrees, though plenty of issues remain to be solved. China has fallen far short of its commitments under the Phase One Agreement regarding US imports, and tariffs between the two countries remain unchanged.

There are also rising threats to globalisation. The new US administration has recently signed an order focused on ‘buying American’. The increase in nationalist and protectionist thoughts are not limited to America, but are also on the rise in Europe and Asia, threatening shipping, as long-haul cargoes face being replaced by shorter haul and more regional trips.

Furthermore, the trade spat between China and Australia continues – and, though tensions may be easing behind the scenes, this does little to help shipowners and operators understand what they can expect in terms of trade between the two countries in the coming months.

On a more positive note, the start of 2021 marked the entry into force of the African Continental Free Trade Area (AfCFTA). The AfCFTA covers 55 countries with a combined GDP of USD 3.4 trillion (around 3% of global GDP) and 1.3 billion people, and it will have little immediate benefit for shipping. However, longer term improvements in economic conditions and infrastructure on the continent will no doubt be beneficial.