October has been the best performing month of 2020 in terms of US exports of the goods outlined in the ‘Phase One’ trade agreement between the US and China. Export values of these goods totalled USD 10.3 billion, breaking the previous high of USD 7.8b in September.

The last few months in particular have seen strong volumes. During the first three months of the year, accumulated volumes were down 14.7%. These were brought into positive territory during the oil price war in April, and particularly May, when US crude oil exports jumped. Total exports have since grown even more as the start of the US soya bean season has boosted exports of agricultural goods. 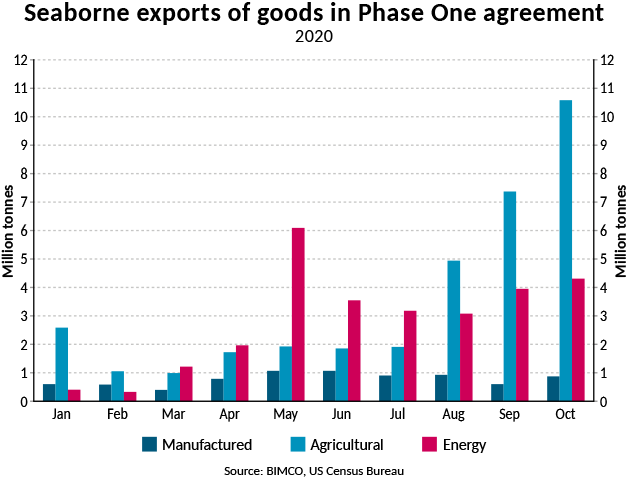 “Although the agreement’s commitments will clearly not be met, the growth we have seen this year is positive for shipping, especially given the long sailing distance. The agricultural and energy goods are the most important for shipping as they add new fronthaul demand, whereas most of the containerised manufactured goods offer much lower volumes and are transported on the backhaul transpacific trade where there is plenty of excess capacity to be filled,” says Peter Sand, BIMCO’s Chief Shipping Analyst.

Exports of energy goods have nearly tripled from last year

The share of US crude oil exports that are sent to China has risen from 4.9% in 2019, to 15.5% in the first ten months of this year, still much lower than the 23.4% share in 2017, before the trade war disruption. The comeback is a good development for shipping as the long sailing distances to China boosts tonne mile demand. 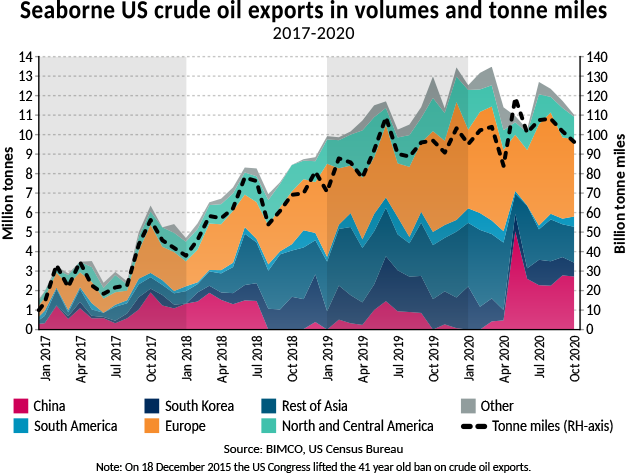 Another boost for dry bulk shipping comes from the increase in the export of agricultural goods, particularly soya beans. Also corn and grain sorghum have seen higher exports this year than last, though not as strong as soya beans. Exports of soya beans reached 20.1m tonnes in the first ten months of the year, up 4.4m tonnes (+28.2%) from last year.

Following a slow start to the year, agricultural exports have seen strong growth since volumes began to ramp up for the marketing year which started on 1 September. Cumulatively, August to October volumes were up 10.5m tonnes compared to last year, equivalent to an extra 140 Panamax (75,000 tonnes) in just three months. 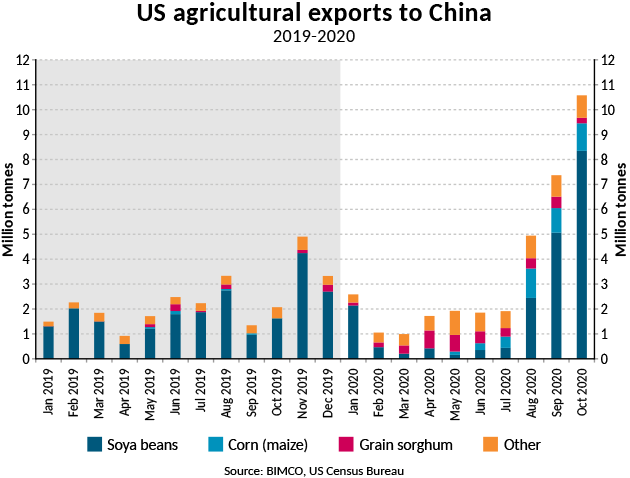 Based on Chinese customs statistics, China’s trade surplus with the US widened in November to its highest level of Donald Trump’s presidency (to USD 37.6 billion); US exports have risen but failed to match China’s exports which have increased to USD 268 billion in November. While higher trade is good for shipping, the growing trade deficit underlines the failure of the tariffs to reduce the trade surplus.

Despite this, BIMCO does not expect the situation to change drastically when the keys to the White House change hands. The tariffs and the ‘Phase One’ agreement are set to remain, at least in the short term, with targets also set out for US exports to China in 2021.

“The chaos and uncertainty of the past four years, marked by unilateral action from the US, is likely to be replaced by a more coordinated, multilateral approach. The new US administration is expected to engage with its traditional allies to ensure that global trade can be carried out in accordance with the rules governing global trade rather than the ‘beating’ China approach which has ostensibly been the case over the past four years,” says Sand.

“Hopefully, this will bring calmer geopolitical environment, albeit not one in which all parties suddenly become best friends.”

Contact online
BACK TO: News & Trends NEXT: Australian coal wins attention, but Indonesian exports to China have fallen the most