The outlook is poor for dry bulk, as the negative demand shock and overcapacity come together to send rates to multi-year lows, even a return to work in China is not enough to support the market.

The dry bulk shipping market has had an appalling start to the year, with all sectors at loss-making levels. Even as China returns to work, the Capesize market, which had found some relief in April, is again experiencing rock-bottom freight rates.

The first quarter of the year proved a mixed bag for the dry bulk shipping industry, with freight rates for the smaller dry bulk segments faring better than those in the Capesize market. April has provided some relief for the struggling Capesize markets, although rates for all ship types remain below break-even levels.

Capesize earnings have been well below the average USD 15,300 per day needed to break even, falling to just USD 1,992 per day, its lowest level since March 2016. While the smaller vessel sizes did not reach such a low point, earnings only reached break-even levels for a brief period, with most of the year at loss making levels. 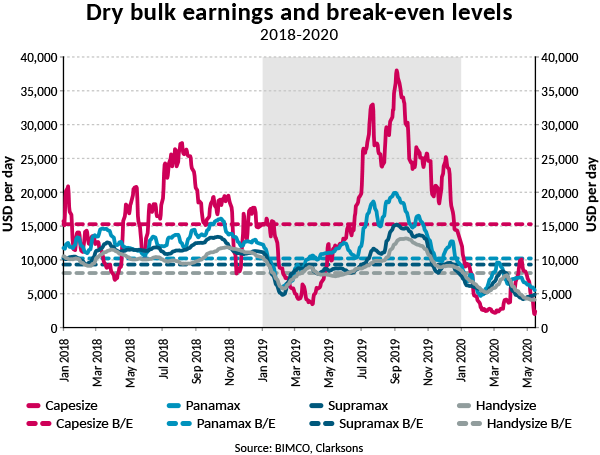 The importance of China to the dry bulk market was clearly reflected when it went into lockdown, as the rates went downwards and, since its reopening, it has provided some upwards support to volumes, but the low rates remain. Volumes of China’s major dry bulk imports have posted year-on-year growth throughout the crisis. Iron-ore imports are up 5.3% and coal up an impressive 27.8% in the first four months.

Of particular importance to the Capesize market are iron ore exports out of Brazil – and, here, the reason for the low freight rates becomes clearer. Iron-ore exports are down 8.7% in the first four months of the year, a loss of 9m tonnes, or 45 Capesize loads (200,000 tonnes).

The exports of 24m tonnes in April curtailed the losses of the first quarter, when volumes were down 17.2% from Q1 2019. This was largely because of the low April exports in 2019. The 24m tonnes was much higher than the 18.7m tonnes last year, when the tailings dam collapse and poor weather conditions disrupted exports. The strong April exports this year did little to lift spot freight rates though, with the majority of the volume going on the ships that are on long-term charters and which have been waiting in line for cargoes after slow exports in the first quarter of the year. Spot rates for iron ore from Brazil to China have fallen to just USD 7 per tonne, down from USD 18.8 at the start of the year.

Two-thirds of Brazilian exports in the first four months of the year went to China (+10.5% or 5.8m tonnes from 4M 2019). The lost volumes to the rest of the world come primarily from lower exports to Asia, excluding China, (-5.2m tonnes) and Europe (-4.5m tonnes).

Even though they have remained consistently below break-even levels, rates for the smaller vessel sizes have avoided the trough that the Capesize market was in, as volumes on their main trades have remained stronger. In more normal times, in fact, developments on these trades would probably have pushed freight rates much higher, but, given the conditions in the market, positive demand developments have only just been enough to sustain freight rates.

Brazilian soya bean exports were particularly impressive in April. After their highest ever Q1 exports of 17.4m tonnes, 16.3m tonnes were exported in April alone, bringing year-on-year growth to 33.8%. Comparing April 2020 with April 2019, an extra 92 Panamax loads (75,000 tonnes) were exported, with 113 extra loads needed in the first four months of this year compared to last. Three-quarters of total exports went to China. 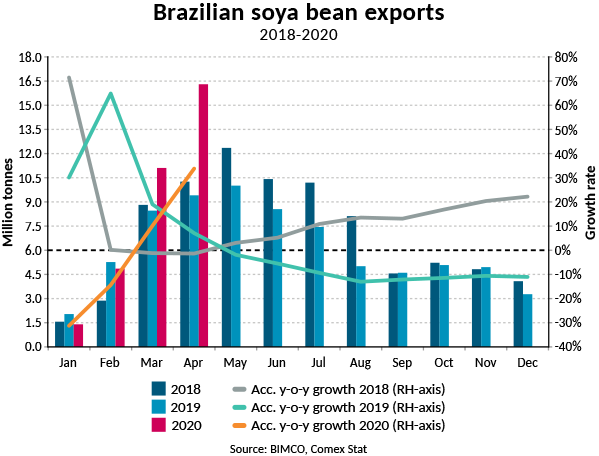 On the other hand, the drop in US soya-bean exports to China has been particularly marked, down 41.7% from the first quarter of last year. Compared with 2017, before the trade war started, soya-bean exports are down 65.6%, a loss of 5.4 million tonnes, or 72 Panamax loads (75,000 tonnes).

Argentinian grain exports have been strong, growing 18.7% from Q1 2019 to Q1 2020, with strong wheat and coarse-grains exports, in particular, providing much-needed demand for Panamax and Supramax ships – but still not enough to bring freight rates up to profitable levels.

The poor US exports spoil the picture of strong grain exports from the Americas. As data is released for each new month, the failure of the “Phase One” trade agreement between the US and China becomes more and more obvious.

Even before the Covid-19 outbreak, January exports saw no boost, and this has only worsened since then. In the first quarter of the year, only 3.1 million tonnes of agricultural goods have been exported from the US to China – less than 10% of the 33.4 million tonnes that China committed to buying at the start of the year.

Since the start of the year, the dry bulk shipping fleet has grown by 1.6% to reach 891.5m DWT on 19 May. BIMCO expects the fleet to grow by 3% in 2020, and we expect a further 39.3 million DWT to be delivered to the market through the rest of the year. This reflects a higher slippage rate for planned deliveries because of the Covid-19 disruptions, which has risen to 35% from 25% before the crisis.

Demolitions have also been disrupted by the pandemic, with the major shipbreaking nations having closed their beaches to ships because of their lockdown measures. This resulted in only one dry bulk ship being demolished in April, a 28-year-old ore carrier with a capacity of 268,132 DWT. The easing of some of the measures allowed 3 ships to be demolished in May, bringing total dry bulk demolition so far this year to 5.4 million DWT. 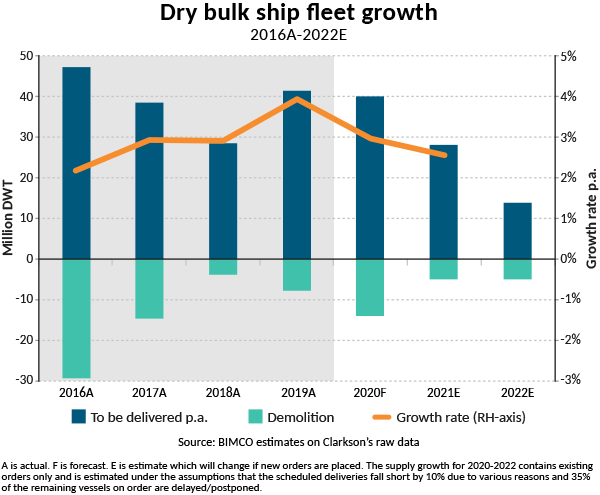 After reduced contracting activity in March, there was a slew of orders from Chinese interests in April, including eight, 210,000 DWT Capesizes. New orders in April totalled 2.7m DWT, bringing total ordering this year to 4.8m DWT, down 56% from the 11m DWT ordered in the same period of 2019.

Vale’s announcement that it will stop using converted very large ore carriers (VLOCs) spells the end of this ship type, as most are well past average demolition ages for the sector and, in the current market conditions, have no prospect for future gainful employment beyond their expiring contracts. Already, 60% of these converted VLOCs are out of operation, and BIMCO expects them to be demolished over the next few years as their charters expire.

Some of the stimulus measures that have been, or are expected to be, announced concentrate on infrastructure and housing investment, which will boost demand for raw materials. But other industries that provide demand for dry bulk – such as steel and aluminium for the automotive industry – have all but collapsed.

The automotive industry has taken a significant hit. Chinese car sales fell 41% in the first quarter of the year and sales in the UK fell by 97% in April, to their lowest level since 1946. While some of the sales will recover when the shops re-open, the poorer financial situation in which many consumers are finding themselves, and a reluctance to invest in durable goods, will limit this recovery and, therefore, the demand for steel – and, so, the demand for iron ore.

BIMCO expects trading in all commodities to fall, including the grains trade, although this could yet turn out to be the joker for the year. Lower commodity demand comes as a direct result of the lockdowns, as well as from the ensuing economic slowdown. The International Energy Agency (IEA) expects demand for coal will fall by 8% in 2020, with lower demand coming from lower electricity consumption because of lockdowns and reduced manufacturing activity. 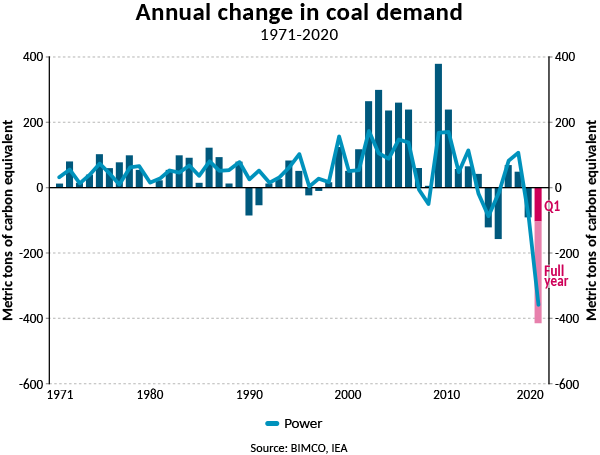 Given the overcapacity – which was already plaguing the market after years of supply growth outstripping demand – BIMCO already expected average freight rates to be in loss-making territory in 2020. This will only be exacerbated by the negative demand shock from Covid-19.

The outlook may yet deteriorate further if lockdown measures last longer than expected, or have to be reinstated to avoid a new wave of infections, but there is little prospect of an improvement. Even with large government investments in infrastructure, the global recession will doubtless lead to lower demand and low freight rates.