A continued slowdown in global growth, as well as a lower trade multiplier will reduce overall demand for shipping for the rest of this year and through 2020.

The World Trade Organization (WTO) has substantially lowered its forecast for trade volumes growth in 2019, putting numbers to the slowdown that is already being felt by the shipping industry. Global growth is now expected at just 1.2%, compared with the 2.6% that had been forecast in the April report. This would represent the lowest growth in trade volumes since 2009.

Expectations for global trade growth have also been lowered for 2020; this is now forecast at 2.7%, down from 3%. The WTO cautions that risks to these forecasts are weighted to the downside, with these risks including a potential deepening of trade tensions, financial volatility and rising geopolitical tensions in many regions of the world.

World goods trade grew by only 0.6% in the first half of 2019, with the WTO expecting a slight recovery in the second half of the year in order for volumes to reach the projected growth of 1.2%, which reflects normal seasonality from a shipping perspective.

Germany’s chambers of commerce (DIHK) have warned that exports may contract year-on-year in 2020 for the first time since the financial crisis. DIHK now predicts growth of just 0.3% in 2019 and a contraction of 0.5% in 2020, as global trade tensions hit the export-reliant economy. On the other hand, France’s economy – which is more dependent on domestic demand than exports – has proved more resilient, with growth of 1.2% expected for the full year (source: Insee).

In Italy, Europe’s fourth largest economy, growth targets have been cut by the new government, which has announced that it expects growth of only 0.1% this year. The government plans to introduce a range of stimulus measures to raise growth to a projected 0.6% in 2020. Without these policies, they expect growth of 0.4% in 2020.

In the eurozone, slowing growth and fears of a looming recession have led to the European Central Bank (ECB) approving stimulus measures to encourage continued lending, even as growth drops below 1.5%. The International Monetary Fund (IMF) now predicts 1.2% growth in the eurozone in 2019, down from 1.9% in 2018. The European Union (EU) as a whole generally fares a little better, with growth expected at 1.5%.

With yet another Brexit deadline behind us and the UK still in the EU, uncertainty continues to plague businesses, with a UK General Election taking place before the latest deadline: 31 January 2020.

The inventory/sales ratio in the US has fallen in recent months to 1.44,  its lowest level since November 2018. Since November 2018, the implementation of tariffs on imports from China led to the ratio rising, as companies rushed to fill their inventories of containerized goods before prices rose. The ratio peaked at 1.49 in February 2019, which is the highest level in more than a year.

A falling inventory/sales ratio indicates that inventories are being emptied faster than they are being filled, despite a delay in the implementation of tariffs on USD 160 billion of mostly containerized goods, which are currently set to be implemented on 15 December. With Thanksgiving already upon us and Christmas fast approaching, BIMCO does not expect another pre-tariff rush to materialise in late November or December 2019, with the ratio only rising to 1.45 in September. 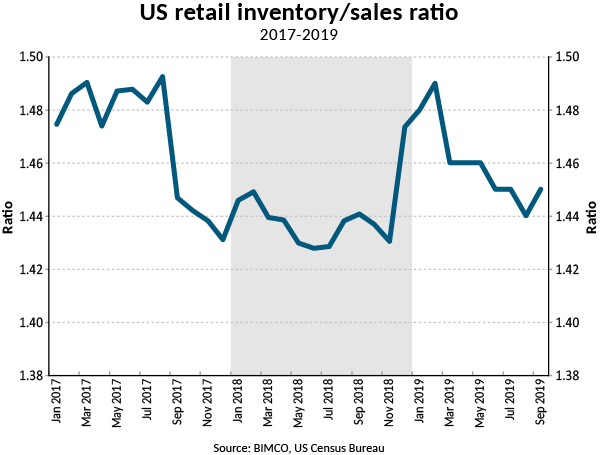 The fall comes despite retailers usually stocking up at this time of the year ahead of the upcoming Christmas sales. Unsurprisingly, the National Retail Federaton (NRF) is, in fact, predicting strong sales in the holiday period, noting that consumer spending has remained strong.

In normal times this leads to high volumes on the eastbound transpacific route, but the trade war means these are not normal times, and shipping has not received its usual pre-Christmas boost this year.

The IMF has lowered its forecast for US GDP growth since July, and now expects growth of 2.4% in 2019 and 2.1% in 2020. The slowdown in the world’s largest economy comes as its manufacturing purchasing managers’ index (PMI) reveals that in the third quarter, US manufacturing had its worst quarter in more than a decade, with the average of the index over those three months lower than any other quarter since 2009. The PMI has since risen to 51.3 in October, after bottoming out at 50.3 in August. In contrast to other major economies and the global index, the US PMI has, despite slowing, not fallen to beneath 50, the threshold level, this year.

The IMF has also lowered its growth forecast for China in both 2019 and 2020, with the rates now projected at 6.1% and 5.8%, respectively. The slowing growth is primarily being driven by falling exports as a result of the US-China trade war, as well as softening domestic demand, and comes despite stimulus measures that have already been put into place. Furthermore, the government has doubled the amount of infrastructure projects that it has approved this year compared with 2018, in an attempt to boost growth through the variables that it can directly influence. Higher infrastructure spending will, to some extent, bring a boost to dry bulk shipping.

Despite the stimulus measures, growth in industrial production in China fell to 4.4% in August – its lowest level since 2002 – and remained low, at 4.7% in October. It had rebounded in September, pushing up to 5.8%, with the rise  attributable to higher domestic demand, although overall demand – including that for exports – remains historically low, which is reflected in the lower growth in October.

In other Asian countries, growth is also slowing. The disruptions in China are spilling over, and the continued tensions between Japan and South Korea, as well as rising geopolitical risks, are all dampening growth. For example, the IMF now forecasts 2% growth in South Korea in 2019 and 0.9% in Japan.

In addition to the WTO’s trade growth downgrades, the IMF has revised its GDP growth projections down for 2019 and 2020, so that they are now in line with BIMCO expectations following the further escalation of the trade war. Global growth is now forecast to slow to 3% in 2019 (down 0.2 points from the IMF’s July report) before rising to rise to 3.4% in 2020 – still below 2018’s 3.6%.

The low GDP growth predictions from the IMF come despite governments around the world implementing stimulus measures. The IMF estimates that without these, global growth would be 0.5 points lower in both 2019 and 2020 (at 2.5% and 2.9%, respectively). The higher growth as a result of these packages is, of course, good news for the shipping industry, but also leaves the question of whether there is more that can be done to lift growth – especially in advanced economies – or if governments have simply run out of options for stimulating their economies? 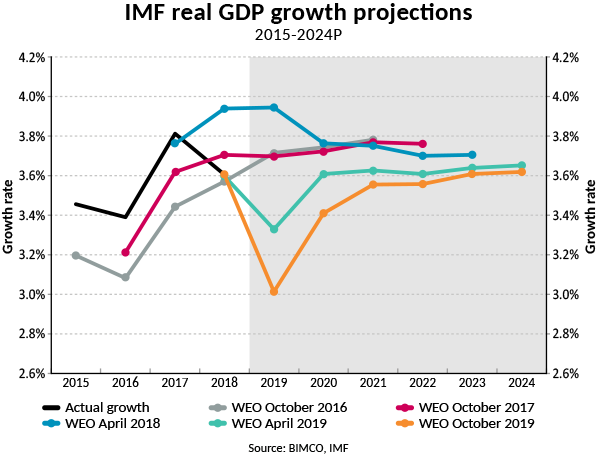 The US and China are rumoured to be nearing an agreement on phase one of a deal ­– whatever that means – which, if signed, could ease tensions, reducing the risk of a further escalation of the trade war. We have, however, been in a similar situation several times before over the past year, and although the current tariff delays are good news for trade volumes, BIMCO remains concerned that this trade war may continue to drag on into 2020 and, potentially, beyond. Even if a phase one deal can be signed, the hardest parts of an agreement are yet to be worked on.

Furthermore, after a WTO ruling on aid given to Airbus, the US has imposed higher tariffs on USD 7.5 billion worth of EU goods, further worsening global trading relationships.

BIMCO reiterates that raising tariffs is bad not only for the economies directly involved, and shipping between them, but also for the global economy and trade as a whole.