April was a disappointing month for the crude oil shipping industry with a dramatic fall in US crude oil exports which caused tonne mile demand to fall disproportionally. 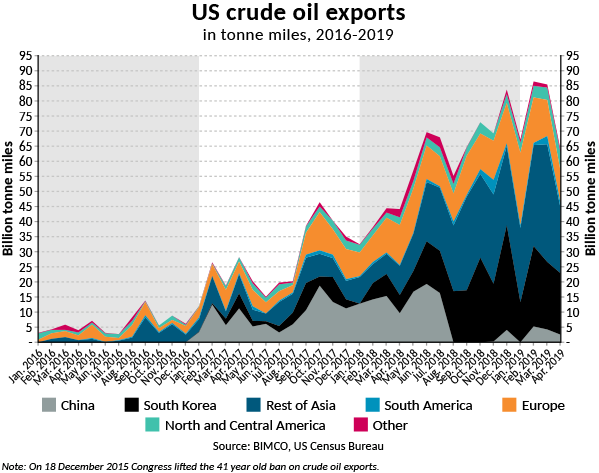 Due to the much shorter sailing distances, the increase in exports to North and Central America meant demand for shipping fell by more than volumes would suggest. Volumes fell by 6% from March to April, whereas tonne mile demand dropped by 25.1%.

“The longer the sailing distance, the more valuable the trade is to the shipping industry with demand for shipping measured in tonne mile demand rather than just tonnes.

Whether crude oil is sold to South Korea of Canada makes little difference to US exporters, but a huge difference to the shipping industry,” says Peter Sand, BIMCO’s Chief Shipping Analyst.

This was the first month on month decline of US crude oil exports since August 2018. After exporting over 10 million tonnes of crude oil in both February and March, April saw a disappointing 8.8 million tonnes exported.

In August 2018, US crude oil exports dropped as Chinese buyers completely stopped their imports in response to the trade war.

In January, a slump in tonne mile demand was especially driven by a dramatic reduction in exports to South Korea with political sanctions and trade war tensions playing out on the trade lanes. US exports went from 2.25 million tonnes in December to 0.86 million tonnes in January.

The future of the US-China trade

The future of this trade depends on the status of the relationship between the US and China. Trade talks are now back on the table with the two leaders set to meet at the G20 meeting taking place in Japan between 28 and 29 June. A breakdown of talks in May led to increased tariffs on Chinese exports to the US and US exports to China.

US crude oil exports to China could be an important part of any trade deal the countries reach given President Trump’s focus on improving the trade balance between the two nations. Perhaps the G20 will provide new answers,” says Peter Sand. 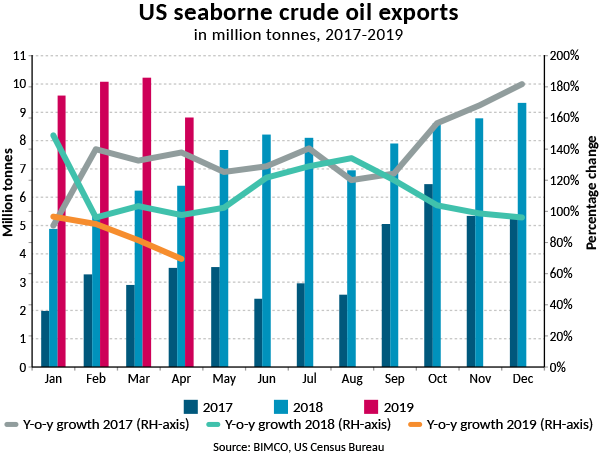 “Since the crude oil export ban was lifted at the end of 2015, US crude oil exports have grown massively, and in 2018 accounted for around 7% of total tonne miles generated by crude oil transport, with this figure expected to rise in 2019,” says Peter Sand.

Contact online
BACK TO: US soya bean exports, up or down? NEXT: Crude oil tanker freight rates from the Arabian Gulf to China double on the back of tanker attacks