The fragile recovery is stalling because the fleet is growing too fast.

This year – 2018 – has delivered as promised. The improved fundamental market conditions in the first three quarters of 2018 have seen the Baltic Dry Index (BDI) rise significantly – up by 24%, 25% and 41% in Q1, Q2 and Q3 respectively, when compared with the same time last year.

Will Q4 go even higher? Unlikely. In October 2018, the BDI only improved by 4% compared with October 2017. The demand for Capesize is facing headwinds, with Chinese iron ore imports down by 0.5% for the first 10 months, while the Panamax long-haul trade of soya beans from the US Gulf to China is expected to fall well short of last year.

While the spot freight rates for all dry bulk sectors are profitable at current levels in early November, it is only little more than a year ago that this wasn’t the case. Going into Q4, the unknown territory of a trade war will bring challenges for the dry bulk market. As the peak season for US soya bean exports will undoubtedly disappoint and renew the pressure on the dry bulk shipping market, we must not forget that the recovery has only recently gained a foothold.

Capesize freight rates have improved the most in Q3-2018 (+51% y-o-y), somewhat against the odds. Chinese iron ore imports are down, while six Valemax have started their maiden voyage from Chinese shipyards to Brazil to load the first cargo of iron ore. They bring the total new-built deliveries for the year up to 15 Valemax, with 18 still left on the order book, primarily for 2019 delivery. 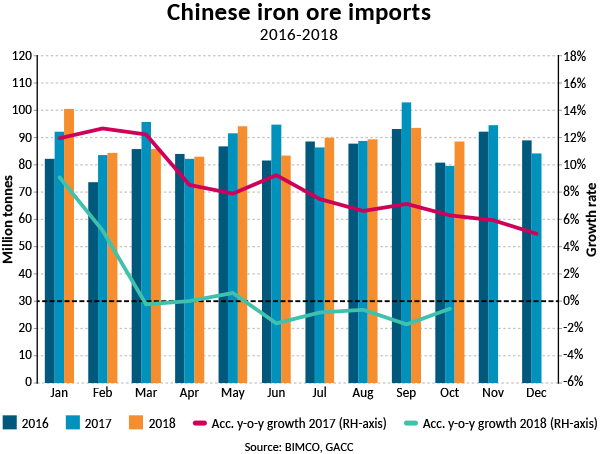 Among the minor bulks, bauxite exports out of Guinea-Bissau have been strong for the second consecutive year, while the re-entry of Indonesia as a bauxite exporter to China is also worthy of mention. Transhipments outside the Port of Kamsar has turned many of the new cargoes into capesize loadings mostly heading for the Far East and helping to ease the pain of lost iron ore cargoes.

Transportation of scrap metal has been strong in 2018 too. This market grew by 11 million tonnes in 2017 (+11%) with another seven million tonnes (6%) expected this year.

When the freight market condition improves, a certain set of dynamics comes into play: new building interest increases – we saw that in 2017; demolition activity cools down – we have seen that throughout 2018; and, slippage to the scheduled order book comes down as new-builds are now delivered into a profitable market when compared with the previous five years.

In conclusion: the fragile recovery is stalling because the fleet is growing too fast. 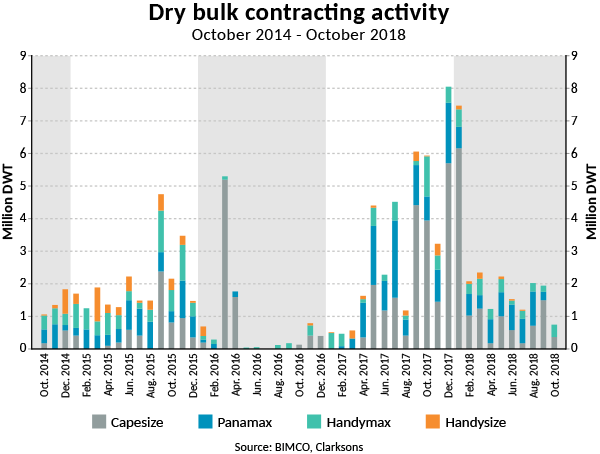 Handysize bulkers seem to have fallen completely out of fashion since January 2016, when 10 ships were ordered. Interest has never been this low since records began in 1996. Since February 2016, just 63 units have been ordered, for a combined purchase price of USD 1,146 million. This price can be compared with Very Large Ore Carrier (VLOC) orders in January 2018, where four Chinese shipyards received orders for 14 VLOCs (208,000 DWT) for a total of USD 630 million.

The reason for this development may be that owners and investors expect demand outlook for larger ships to be better than that for small ships, given the industrialisation of the industry, which is going on in terminals and among customers and shipowners.

The continuing weakness in demolition activity also means we need to revise our fleet growth estimate for 2018 slightly up. This narrows the improvement of the fundamental balance. Where the demolition is down as a result of human nature in the shipping market (that is, not handling the supply side with care), the changes to the demand side relate somewhat to the trade war, the drought in Europe, the limitation of grain exports by Australia, and China growing its iron ore imports slower than forecasted.

The fleet will now grow by 3.0%, if our revised demolition estimate of just 4m DWT (down from 5m DWT) is realised. 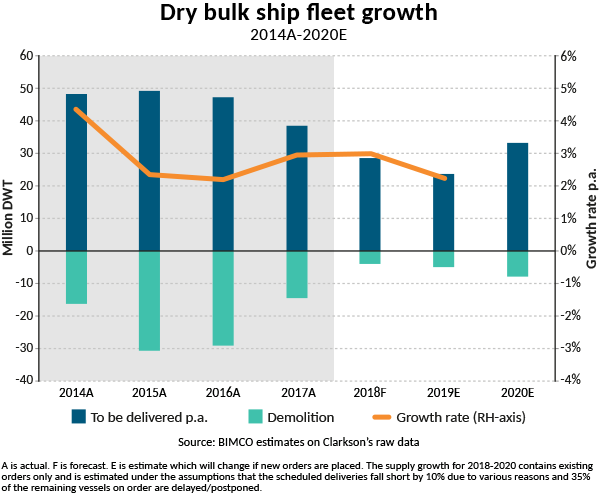 If we look back at how the year has developed – the picture, we paint is far from rosy. BIMCO had expected that demand growth would exceed fleet growth in 2018, before balancing out in 2019 with similar growth rates for demand and supply.

We began the year forecasting dry bulk demand to grow by 2.8% and the fleet to increase by 1.4%. What we got instead were higher freight rates but no massive improvement in the fundamental balance. However, we still expect the industry to retain the improvements seen in freight rates in 2019, bearing in mind this requires a keen focus on fleet growth.

Looking ahead, it is vital to take note of BIMCO’s early estimate of 2.9% for dry bulk fleet growth in 2020. This means that supply-side pressure is likely to be seen, as we neither expect demand-side growth exceeding 3% for 2020, nor in 2019 for that matter.

Chinese soya bean imports in November and December are normally solid, but they are not the strongest months. We note that 4.7m tonnes in November 2017 and 6.2m tonnes in December 2017 were American beans. These accounted for 54% and 61% of total imports for those months, respectively. This is equivalent to 218 Handymax loads of 50,000 tonnes or 145 Panamax loads of 75,000 tonnes. To date, China has almost completely shied away from US soya beans. Any easing of the trade tensions is likely to have a positive effect on soya bean exports from the US to China, as alternative sources are scarce.

In 2017, Brazil delivered the lion’s share of Chinese soya bean imports from non-US origins. Having exported 10.2m tonnes more to China this year already, we do not expect Brazil to export much more in 2018 as its export season has come to an end. However, it should be noted that the sailing distance between loading and discharge port is more than one month, thereby leaving room for already-shipped Brazilian beans to reach China this year. 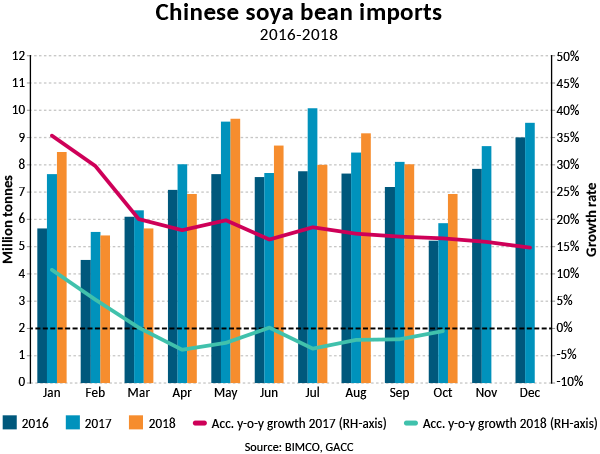 Contact online
BACK TO: Tanker Shipping: Winter is coming, random shocks can be powerful, but only fundamental improvements last NEXT: Macroeconomics: Adverse trade politics and rising trade barriers are challenging the industry