The determined development that saw no US seaborne exports of crude oil to China in August, has continued into September. This is despite crude oil not being a part of the ‘official trade war’.

“The trade war between the US and China is now impacting trade in both tariffed and some un-tariffed goods with both countries looking elsewhere for alternative buyers and sellers.

Tonne mile (TM) demand generated by total US crude oil exports has risen 17% from August to September, but is down 4.8% from the record high in July.

For the crude oil tanker shipping industry distances often matter more than volumes, with exports of US crude oil to Asia generating 74% of tonne mile demand in September, up from 70% in August," Peter Sand, BIMCO’s Chief Shipping Analyst, says. 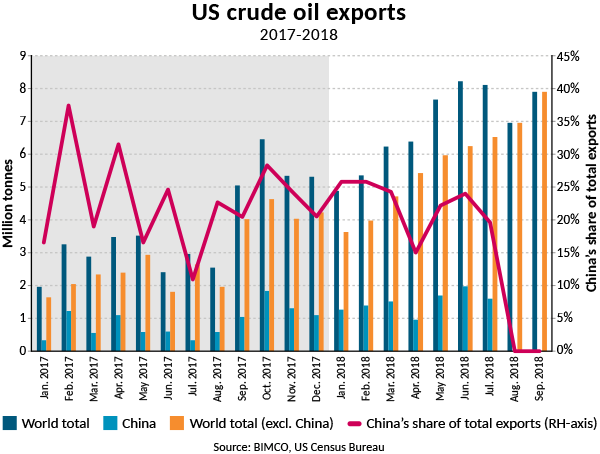 In 2017, Chinese imports accounted for 23% of total US crude oil exports. In 2018 that number was 22% during the first seven month, but has dropped to 0% in August and September.

US crude oil exports to any other destination were record high

Exports to Asia jumped in June and July, from a 43% share of total exports since the start of 2017 to reach a 56% share. That share was down to 46% in August, but climbed back to 51% in September. The two other major importing regions are Europe (33%) and North and Central America (13%), while South America (2%), the Caribbean (1%) make up the rest - September share of exports in brackets.

Contact online
BACK TO: Container Shipping: Slow growing demand is a constant challenge NEXT: US Soya Bean exports to China are down by 97%