Tanker shipping: A record poor tanker market with a growing fleet is prolonging the crisis

The continued severity of the tanker market conditions has made owners dig deep into the oversupply of capacity. Still BIMCO expects the tanker fleet to keep growing. A short-term rate recovery is not expected, as it is ‘maintenance season’ for the global refining industry in September and October.

BIMCO expected the crude oil tanker market to continue its struggle from 2017, but the magnitude of it has been staggering, as evidenced by the worst freight rates on record. This is particularly true for crude oil tankers, but the oil product tankers are now set for a loss-making year too. 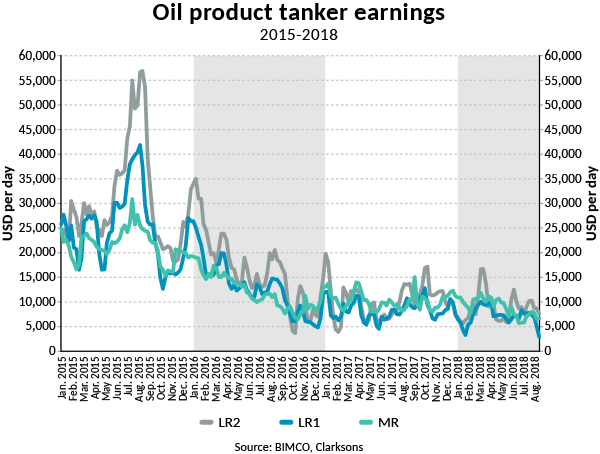 By 24 August, we note that year-to-date average earnings for the Very Large Crude Carriers (VLCC), Suezmax and Aframax crude oil tankers stand at USD 6,797, USD 11,337 and USD 10,438 per day respectively.

Noting that liquidity in the time charter (T/C) market is limited, it is still striking that the T/C market has been upside-down for more than a year now. Normally, short-term T/C rates (6-12 months) are higher than long-term ones (3-5 years). In depressed markets, it’s the other way around.

Growing Chinese crude oil imports (up 5.8% during the first half of 2018) improved crude oil tanker demand, but obviously not enough, as other elements are pulling the market in the opposing direction. It remains a fact, however, that global oil demand is growing constantly, and so is global tanker demand.

Fortunately, the introduction of a tariff on 10 million tonnes of crude oil exports from the US to China was avoided at the very last minute. If China decides to source its import demand for sweet crude by going to West Africa, shorter sailing distances will hurt earnings. BIMCO does not expect crude oil to re-enter the trade war after it has been removed. But a combined 2 million tonnes of refined oil products became a part of it in early August, when an exchange of already proposed tariffs affected various goods worth USD 16bn on both sides.

One of the more spectacular trades seen recently has been a couple of VLCCs shipping oil products from the Far East into Europe on their maiden voyage – quite hurtful for oil product tankers, but a sure sign of the horrible crude oil tanker markets.

The continued severity of the market conditions has made owners dig deep into the oversupply of capacity. BIMCO now expects 19m DWT of crude oil tanker capacity to be demolished – up from 13m DWT in May – and 2.5m DWT of oil product tanker capacity is to leave the fleet, up from 1.5m DWT in May.

During the first six months of 2018, 13.1m DWT of crude oil tanker capacity has been demolished, a level equal to the total for the preceding 40 months. A change in that trend now seems to have developed, however, as only one VLCC was broken up in July, and little more that 1m DWT was taken away in total. BIMCO expects that there will be a cooling in demolition activity in the final six months of 2018, as the market is likely to deliver somewhat higher freight rates on the back of increased demand in the second half of the year.

Although scrap steel prices are high right now, returning about USD 17m to a VLCC owner when scrapping, this isn’t the deciding factor – freight rates and earnings are.

Fleet growth year to date has been muted by the massive demolition activity. The crude oil tanker fleet was 0.2% smaller by early August than it was at the start of the year. The oil product tanker fleet has grown 1.7% in the first seven months of 2018.

Our fleet growth forecast for the full year of 2018 is at 0.8% for the crude oil sector and 2.4% for the oil products sector. 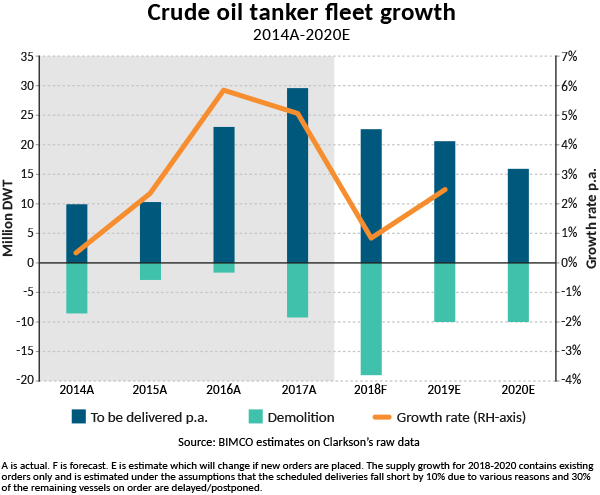 After a surprisingly high number of new orders emerged during the challenging first half of the year, there were no new orders for crude oil tankers in June. Looking at BIMCO’s delivery forecast, a halt in contracting is long overdue. It is already clear that the industry must keep demolition activity high well into 2019, to avoid a worsening of the fundamental balance.

For oil product tankers, the supply outlook is better; moreover, the ordering of newbuilds in 2018 has been quite low – at a level not offsetting a potential recovery in the market when demand improves.

Figures from early August prove that the fleet growth has slowed considerable over the past year:

For steady and positive demand growth, you need to look east of Suez. Crude oil throughput in the eastern refineries is constantly positive and growing. If you look to the west of Suez (Atlantic Basin in graphics), it gets volatile and unstable. This reflects the ongoing multi-year shift that we are experiencing on a global scale, where oil demand growth is now dominated by Asia, whereas demand in the US and Europe is only growing slowly. 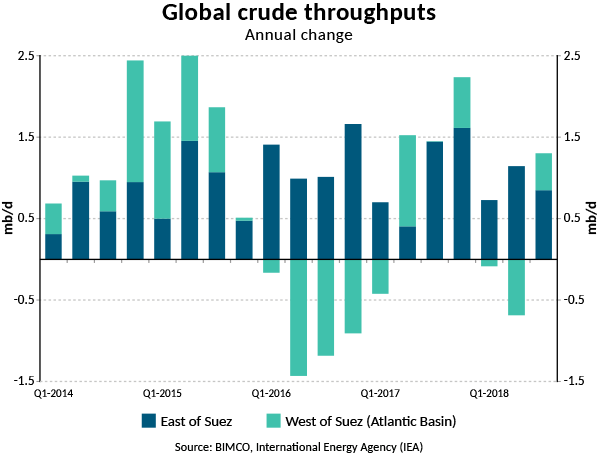 A short-term rate recovery is not expected, as it is ‘maintenance season’ for the global refining industry in September/October – mostly the part of it located in the OECD countries (mainly the US, Europe, Japan and South Korea) and Russia – as they repair and prepare the facilities for the winter specifications of the refined oil products.

There is anecdotal evidence that there may be a significant premium on long-term time charters for oil tankers with a scrubber installed onboard, compared to similar ships without it. Two VLCC newbuildings fitted with scrubbers are being fixed at USD 35,000 per day for three years, with delivery in 2019. Rates for non-scrubber-fitted ships are being quoted at USD 24,000 per day.

Overall, global oil demand remains healthy. The International Energy Agency (IEA) expects growth of 1.4m barells per day (bpd) in 2018 and 2019, down from 1.5m bpd in 2017. Asia will be driving two-thirds of the incremental volume growth, even though it only accounts for 27% of the total demand today.

During the second half of 2018, BIMCO expects freight rates to go up from the very low levels seen up until now. Seasonal demand should support the market in Q3 and, especially, in Q4. For crude oil tankers to really enjoy solid earnings, however, patience is required, as overcapacity is currently significant. The fundamental balance could worsen in 2019 if demand growth does not pick up, as the fleet could grow by 2.5% unless extensive demolition activity continues.

Contact online
BACK TO: Container Shipping: it is obviously very difficult to hold down fleet growth to improve the market. NEXT: Macroeconomics: Regional and global disputes heighten uncertainty and kill optimism and trade growth