The future of oil demand and subsequently of tanker demand is very much policy driven. It has been so in the past to some extent, but in coming years this will be more apparent.

BIMCO was surprised by the barely seen seasonality in tanker shipping where freight rates peak during the colder months in the Northern Hemisphere - from November to January. Loss-making freight rates across the board highlight the issues that the tanker industry is currently battling.  Overcapacity, weak ”trading demand” and weak OPEC output have depressed the conditions that usually boost long hauls. 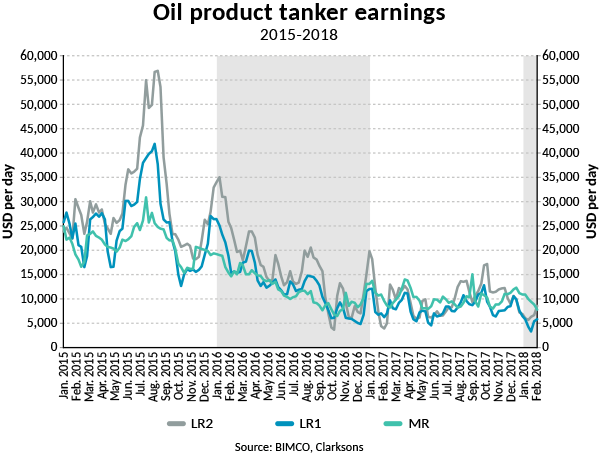 As illustrated by the very weak rates for oil product transports during most parts of 2017, the hardship extended losses into 2018.

For VLCC spot earnings, 2017 was the worst year since 1994. Average earnings of just USD 17,800 per day meant money was lost every day. Suezmax earnings averaged at USD 15,829 per day and Aframax at USD 13,873. The fact that China increased its importance in the oil market at the same time, generating a lot of tanker demand growth as it became the largest importer in 2017 (exceeding the US in April), freight rates remained dismally low.

China grew its imports by 10% (volume) in 2017, from the year before, and much of it was long haul imports. However, this boost to demand wasn’t enough for the overall market to improve.

This brings our attention back to the rebalancing of the global oil stocks, and to the question of what is the future ”right level” of global crude oil and oil product stocks going forward? Where’s the goal line? A return to the absolute stock levels of 1 July 2014, does not seem to be the target. Consumption rose from 93.9m bpd in mid-2014 to reach 99.3m bpd by December 2017. As consumption rise, stocks are likely to follow suit.

Stock levels are often measured by ”days of supply” – giving an indication that accumulated stocks equal to +1m bpd maybe one target point to watch out for.

According to the U.S. Energy Information Administration (EIA), the implied stock changes to the world liquid fuel balance in Q1-2018 show a drawdown of stocks, for the fifth consecutive quarter. Overall, stocks have piled up to an equivalent of 2.9m bpd since mid-2014, when crude oil prices started to decline rapidly. For 2018 and 2019, EIA forecast modest inventory (stocks) build up.

The drawdown of stocks is measured as a ‘flow’, i.e. the difference between oil production and oil consumption in million barrels per day (m bpd) and not as an absolute in million tonnes. 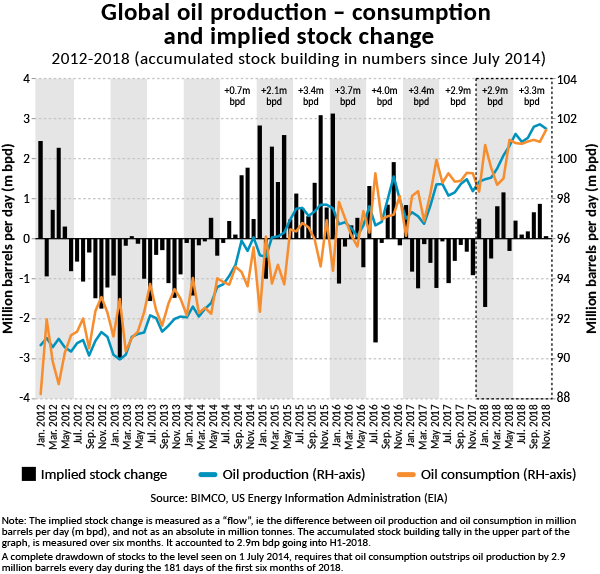 Since November 2016, when OPEC and non-OPEC producers agreed for the first time ever, to deliver a co-ordinated cut in oil supply, global stocks have declined. Despite that effort, stocks remain significantly above the level they were before oil prices started to drop, inspiring large-scale stockpiling during Q4-2014 to Q1-2016. The deal to cut oil output runs until the end of 2018.

So why is it that global stocks do not continue their decline? The short answer is because the US oil producers, who are not party to the supply cut agreement, are increasing their output from 9.3m bpd in 2017 to a forecast 10.3m bpd in 2018.  Output reached 10m bpd in November 2017. From an oil tanker perspective, the uncertainty surrounding global oil supply adds another layer of unpredictability to the market.

Regardless of the talk about alternative sources of energy – oil demand continues to grow. The International Energy Agency (IEA) forecasts global oil demand to grow by 1.3m bpd in 2018. Potentially breaking the 100m bpd barrier during Q4 2018.

A four-year high for demolition was not enough to prevent the freight market from stagnating, as the crude oil tanker fleet grew by 5.1% and the oil product tanker fleet grew by 4.2% in 2017. For 2018, BIMCO expects the amount of capacity leaving the fleet for demolition to go down slightly. This is due to a lower level of newbuilt deliveries and expectations of slightly improved demand growth in the second half of 2018.

For 2018, BIMCO expects slightly higher fleet growth, on the back of the factors mentioned. We are now expecting the crude oil tanker fleet, as well as the oil product tanker fleet, to grow by 2.5%.

Fleet growth estimates are quite sensitive to demolition forecasts – which in turn are very sensitive to freight rate developments. 2018 has already seen 0.5m DWT of oil product tankers tonnage and 1.1m DWT of crude oil tanker tonnage being demolished (including two VLCCs). As the year progresses the pace is expected to slow down.

In terms of new tanker orders, 2018 is off to a slow start. It seems as if the recovery of the dry bulk sector meant that most orders placed in January were for dry bulk ships. One VLCC, two LR1s, five MRs and six handysize is it – for now. 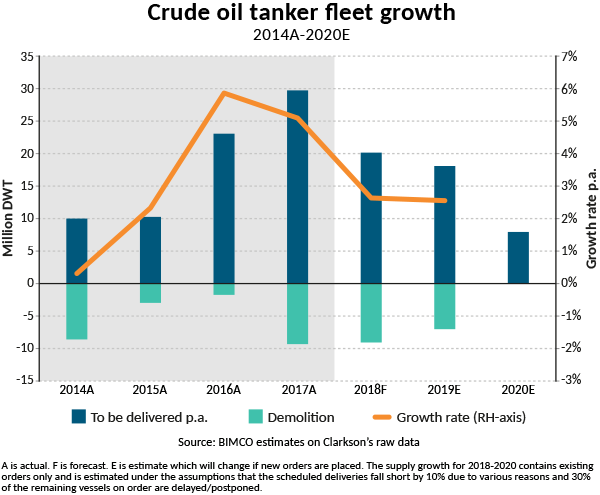 According to McQuilling Services, less than 20 VLCC are currently being used for floating storage. This is due to the oil market backwardation (future price of oil being below the spot price) which does not encourage anyone to store oil, at sea or on land, until contango (future price of oil being above the spot price) returns on a more permanent basis. Floating storage at current level has no impact on the freight market. 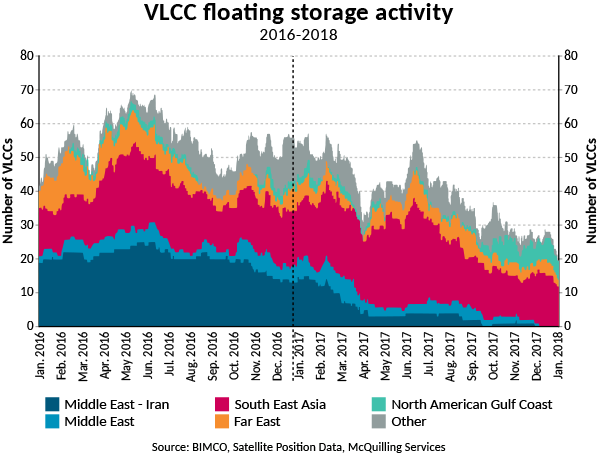 The future of oil demand and subsequently of tanker demand is very much policy driven. It has been so in the past to some extent, but in coming years this will be more apparent.

The impact of policy can be seen in many forms. Such as:

These are all major market policy events that have impacted the tanker market and its trading lanes.

Next in the line of policy driven changes with a potentially widespread impact, particularly on the oil market and oil tanker market comes from the industry itself. The 2020 marine fuel sulphur cap is a huge issue, not just in terms of the uncertainties surrounding fuel availability and compliance, but also in terms of the positive knock-on-effect on shipping demand but also the negative and inevitable higher cost of bunkers.

More questions are raised by the day, with only very few absolute replies to any of them. Will there be a sufficient amount of compliant low sulphur marine fuel available from 1 January 2020? Even if there is, how much of this compliant fuel will require largescale redistribution from its production area to the purchase place of the bunkers? Will there be a requirement to refine and stockpile compliant fuel ahead of 1 January 2020, if yes how much?

What is apparent is that shipping demand will be positively impacted -  mainly, in the short term with the building of local stocks, but possibly also in the longer term if the compliant marine fuels from the refineries continue to be produced remotely to the bunker refueling hubs. Last but not least, what will the refining industry do with the high sulphur residuals previously “disposed of” through the shipping industry? They will need to find new markets to ship to.