Macroeconomics: Economic growth around the world is supporting shipping

It has been quite some time since macro-economic development has looked this positive and as supportive of shipping.

The International Monetary Fund (IMF) has published its World Economic Outlook for January 2018 and has subsequently revised its original forecast for global growth in 2018 and 2019 - up by 0.2 to 3.9% for both years. 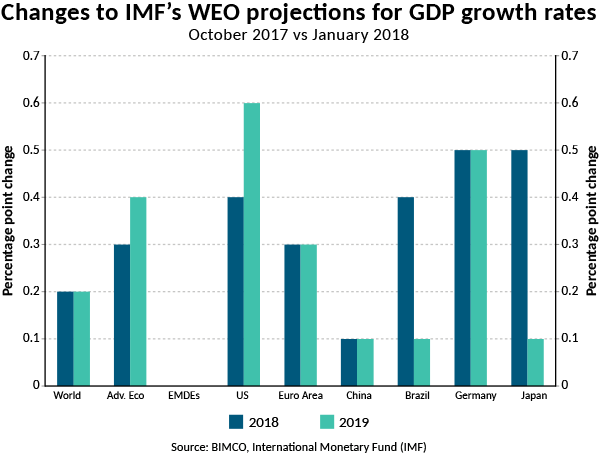 Amid strong growth in the Euro area and the US, the IMF has maintained its projection for the emerging markets and developing countries (EMDEs) of 4.9% growth in 2018 and 5% in 2019. The IMF expects the global economy to maintain its momentum in the short term, unless a significant correction in the financial markets derails it.

When navigating such a strong global economy, it is essential that countries reap the opportunities this “window” provides and undertake critical reforms. With global long-term growth projected to rise only moderately in the coming years, it is essential that nations implement structural reforms to unleash any additional growth potential. Improving the economic growth potential through structural reforms supports productivity, and thereby improves the medium and long- term derived demand for the shipping industry.

Manufacturing in Europe is currently running at full throttle according to the Manufacturing Purchasing Managers' Index (PMI). In our previous analysis of global macroeconomics, we focused on strengthening manufacturing PMIs with the growth from the Euro area. This growth has continued and reached the highest level ever recorded in December 2017. While the Manufacturing PMI for January 2018 has dropped slightly from the record high, it remains well above the threshold level at 50. Therefore, the Euro area has signalled expansion in every consecutive month over the past 55 months.

Despite a high manufacturing PMI for the Euro area, core inflationary pressure remains low and together with subdued wage growth, there is indication of a further opportunity to squeeze the labour market. However, IHS Markit (The PMI data provider) has emphasised that both input costs and output prices are currently rising at faster rates. The input costs have increased because of shortages due to demand outstripping supply. This provides a rising demand for container shipping, as the shortage mainly comes from partly finished goods (and equipment used for production of consumer goods).

In line with a surge in manufacturing, the IMF has increased its expectations for the Euro area output by 0.3 for 2018 and 2019, which amounts to a growth rate of 2.2% in 2018 and 2% in 2019. This is primarily due to a stronger momentum in both domestic and foreign demand.

It is evident that the IMF expects the US tax bill to generate plenty of activity after hiking the growth for the US by 0.4 percentage points for 2018 to 2.7%, and by 0.6 for 2019 to 2.5%. They estimate that half of the upward revision for the global growth projection for 2018 and 2019 will be driven by US output and the positive effect it may have on its trading partners. For shipping, a possible boost in investment will lead to higher demand and increased trade, if it is not absorbed by inward looking policy requirements.

For the container shipping industry, the economic picture in the US is favourable with a possible pick up in wages boosting consumer demand. In January 2018, the US achieved the highest increase in average hourly earnings since June 2009, together with a 17-year low unemployment level, elevating consumer and business confidence.

Unsurprisingly China reported a GDP growth of 6.8% for the full year in 2017, as this has been the new normal growth rate for the Chinese economy. Despite not growing by a two-digit figure, it must be emphasised that this is still a significant growth rate and, in absolute terms, adds more to the Chinese economy than previous growth levels such as 14.2% in 2007. 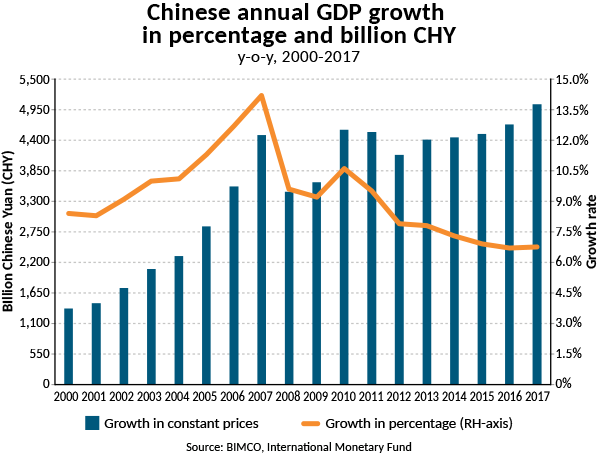 While the pace of economic expansion in China slows down, it is important still to remember that China grew its GDP by USD 705bn in 2017. This is equal to the entire Swiss economy, measured at USD 680bn in 2017, or two times the size of the entire South African economy (USD 344bn) (source: IMF).

The growth rate in the Chinese economy for 2018 is expected to slow moderately with the focus shifting towards relative financial tightening after years of aggressive expansionary fiscal and monetary policies. This is dampening investments in construction and infrastructure, which in turn leads to lower demand growth for dry bulk commodities imported by China.

In December 2017 Japan achieved the highest recorded seasonally adjusted industrial production level since October 2008. This corresponds to the significant increase in the IMF’s projection for Japan’s GDP as expectations have been lifted by 0.5 to 1.2% GDP growth for 2018, and by 0.1 to 0.9% GDP growth for 2019.

It has been quite some time since macro-economic development has looked this positive and as supportive of shipping.

Political events can undermine the development, but 2018 appears to bring fewer economic growth “derailing” events compared to 2017. The most important factors to potentially derail growth are likely to be the US midterm elections in November, the renegotiation of the NAFTA and the negotiation of the Brexit deal. Notwithstanding, the sustainability of the all-important Chinese economy.

For sustained economic growth, the political deals resulting from these events need to decrease the number of trade barriers and ensure regulatory alignment. This will help to encourage potential growth as restrictive trade measures can discourage trade flows and have negative knock-on effects on economic growth and job creation.

The World Trade Organization (WTO) has asked all nations to resist from adopting inward-looking policies and urged its members to show leadership by committing to open and mutually beneficial trade. According to the most recent trade monitoring report this has been embraced. In the period from mid-October 2016 to mid-October 2017, 128 measures were implemented to facilitate trade, compared to 108 trade-restrictive ones.

According to the WTO, world merchandise trade has rebounded strongly as volumes grew by 3.6% in 2017 compared to 1.3% in 2016. It is expected that this will drop moderately to 3.2% in 2018 due to a downside risk arising from trade policy measures and geopolitical tensions.