This is the highest global oil demand ever but it's also a large and growing fleet. What the tanker market needs most right now is more tankers engaged in floating storage facility.

The past couple of months have seen discussions about the rebalancing of the oil markets, only surpassed by discussions on the short-term effects of Hurricanes Harvey and Irma on the tanker shipping market.

First things first. The global stocks of crude oil and oil products are being drawn down slowly, as the OPEC-led adjustments to global oil supply affect less than one-third of global production. An important part of it, no doubt, but it still leaves two-thirds of the ”rebalancing efforts” out of OPEC-control. This includes OPEC members like Nigeria and Libya, both nations that have increased their output in 2017. Another significant producer that has scaled up its production in 2017 is the US. By mid-October OPEC called upon US shale oil producers to help reduce the supply glut, as they react to a slow rebalancing of the oil market.

Global oil demand is heading for a new all-time high at 98.7m barrels per day (bpd) in Q4 2017. Up by 1.9% from Q4 2016. Where is this demand coming from? Out of an incremental growth of 1.87m bpd, 1.06m bpd (57%) of that growth is coming from Asia, which is good for shipping. Particularly, if that demand is met by oil from African producers and not the relatively short-haul producers in the Middle East. 0.35m bpd (19%) comes from the Americas – this may impact shipping only slightly, whereas a further 0.23m bpd (12%) comes from the Middle East with no expected effects on shipping at all.

Recurring turmoil in Libya’s giant El Sharara oil field means that the nation will stay a swing exporter, with a significant untapped potential until the unrest settles.

In the US, the last week of August and the first weeks of September were largely impacted by this year’s hurricane season. The immediate effects were refinery outages, and disruption to the Colonial pipeline which provides large parts of the East Coast US with gasoline, jet fuel and other refined oil products. International shipping assisted to ensure mainland US continued to receive supplies of oil products and the US Jones act was suspended for two weeks.

As of 4 October, one refinery (capacity 225,000 bpd) is currently in the process of restarting after being shut down. Five other refineries (combined capacity of 1.8m bpd), also located in the Hurricane struck US Gulf coast region, are operating at a reduced rate.

In addition, the prolonged downtime at Gulf Coast refineries has reduced crude oil throughput in the US. A knock-on effect has been a large increase in seaborne US crude oil exports, at least if judged by recent spot fixtures (source: Charles R. Weber Company). More than 3m DWT of crude oil tanker capacity was fixed in September, surpassing the previous high in May, that saw 2.2m DWT engaged.

In China, crude oil imports continued to climb in September. During the first nine months of 2017, China imported 33m tonnes more of crude than the same period last year. BIMCO estimates that this equals a tonne-mile growth rate of 18% for Chinese crude oil imports alone.

In total, the demolition of crude oil and oil product tankers in 2017 has not been impressive. But focussing only on product tanker demolitions in August – it reached a five-year-high at 472,000 DWT. For only the second time in seven years, more than 450,000 DWT was permanently removed from active trading. The demolition of two LR2 and five MR/handysize ships accounted for the greater part of this.

For crude oil tankers, we have now experienced increased demolition for three months in a row (July-Sept). August was particularly strong, with a level unseen since 2003. Amongst the demolished ships there were four VLCCs, three suezmaxes and four aframaxes.

But is it too little and too late? No and No! Throughout the year, BIMCO has remained confident that the poor freight markets would eventually result in increased demolition interest. The reason for a pick up now is grounded on the growing belief that this downturn will last longer than first anticipated.

In terms of newbuild interest, we had owners shy away from the demolition market in the earlier part of the year, they were attracted to the newbuilding market instead as optimism was still solid. Ordering of crude oil tanker tonnage was particularly high. However, September proved that the second half of the year surprisingly reflected the first half. No less than nine VLCCs were ordered that month for delivery in 2019 and 2020, bringing the total number of new VLCC orders for 2017 up to 41 units.

While newbuild orders will only affect the market one to two years from now, deliveries in 2017 are already deeply affecting the fundamental balance in a negative manner. 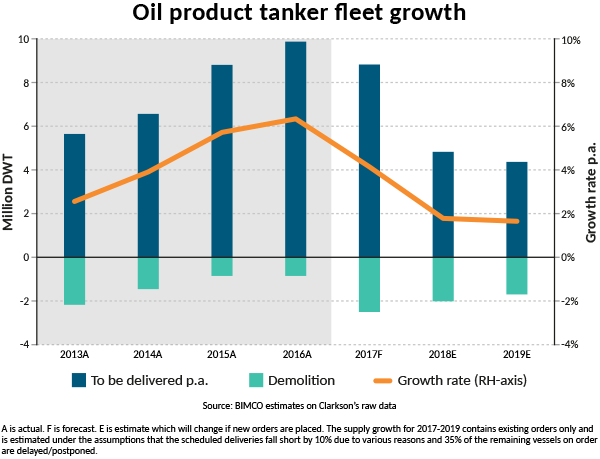 BIMCO expects that the lossmaking freight rate levels that we saw during October, due to maintenance at oil fields and oil refineries, will be somewhat reversed as we enter the peak season for oil tankers, which runs from November to January. This should benefit both oil product tankers and crude oil tankers.

For crude oil tankers, we expect rates to go up, but not to reach the highs of the previous peak season in 2016/17. The market fundamentals are too weak for that to happen. We are seeing the highest oil demand ever, but also a fleet growth of almost 5%.

For oil product tankers, we expect a bigger tailwind to lift rates. However, the market remains fragile. Global oil stocks, built up in 2014-2016 must be drawn upon for tanker demand to normalise again.

There is still a lot to do on that account despite erroneous statements of a ”near-balanced” oil market.

The immediate future of Kurdistan Regional Government (KRG) sour crude oil exports – to several European refiners via the Kirkuk-Ceyhan pipeline into the Mediterranean Sea – is uncertain. In response to the Kurdish referendum (25/9) on possible independence from Iraq, the governments of Iran, Turkey and Iraq have issued statements of potential actions that may affect KRG exports, if implemented.

Before the conflict, KRG exported 600,000 barrels per day (bpd), going to Italy, Greece, Israel, Croatia, Spain and Sweden. At the end of October, exports amounted to just 200,000 bpd.

The likely alternative to KRG crude oil, would be Russian exports out of the Black Sea. But Iraqi Arabian Gulf exports could also step in, as the oil grade is similar. No clear signs of who is going to yet.

In Asia, the ‘busy part’ of the Pacific typhoon season is still here, with most landfalls happening in China, Japan, Vietnam and the Philippines. So far, the typhoon season has passed without devastating key infrastructures or potentially affecting shipping. Nevertheless, extensive weather routing to ensure a safe voyage is being widely applied.

This is the highest global oil demand ever but it’s also a large and growing fleet. This makes the oil tanker market a constantly changing environment. Longer sailing distances are always welcome, but what the tanker market needs most right now, is more tankers engaged in floating storage operations. With Brent and Dubai crude futures pricing being in backwardation and the West Texas Intermediate (WTI) crude in a slim contango for the next 12 months, a comeback for floating storage seems farfetched for the time being.

Contact online
BACK TO: US crude oil exports now more important to shipping than US oil product exports NEXT: Macroeconomics: a "new normal" gives the global shipping industry a better outlook for growth