For the demand side to reap the full benefits of this possible global upturn, globalisation must be embraced and the gains from open trade must be a key focus of the policymaker's agenda, replacing any inward-looking policies

The wheels of the global economy are spinning faster and faster, demonstrated by growing output across the board, reaching pre-crisis growth levels in some advanced economies. The current state of the global economy can now be described as an accelerating cyclical upswing.  It is essential that policymakers ‘seize the moment’ and take advantage of this window of opportunity to undertake critical reforms.

The International Monetary Fund (IMF) has released their final World Economic Outlook for 2017 and with that, they have also increased their expectations for global output by a 0.1 percentage point to 3.6%, (by comparison the world output was 3.2% in 2016). Notably for the shipping industry, the projection for world trade volume has been revised upwards by 0.2 percentage points to 4.2% for 2017, a significant improvement from the 2.4% growth achieved in 2016.

Inflation and wage growth in many advanced economies remains subdued. For these economies to start normalising their monetary policies, inflation must experience upward pressure. One of the measures needed for higher inflation to materialise is growing wages. However, there are still signs that output will be squeezed further, and the labour market will continue to impede the recovery, before growing productivity will lead to higher wage growth, particularly in the United States (US) and European Union (EU). 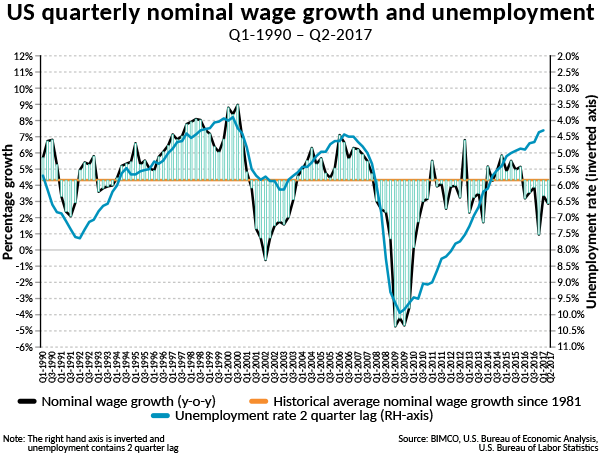 US core inflation has fluctuated between 1.7% to 2.3% since the beginning of 2016 and with nominal wage growth between 0.9% to 3.8% during the same period, the average US worker will have experienced periods of negative real wage growth within the last two years.

The US is however, showing strong growth in imports of containerised goods, indicating that consumer spending is growing despite the gloomy wage growth. The possibility of rising wages is encouraging for the container shipping industry, as higher wages translate into higher household income which promotes higher spending on consumer goods, all indicating additional room for growth in demand.

While Europe has been experiencing economic, political and institutional turbulence, it has shown its ability to manoeuvre with confidence despite the uncertainty, and demonstrated strong growth. 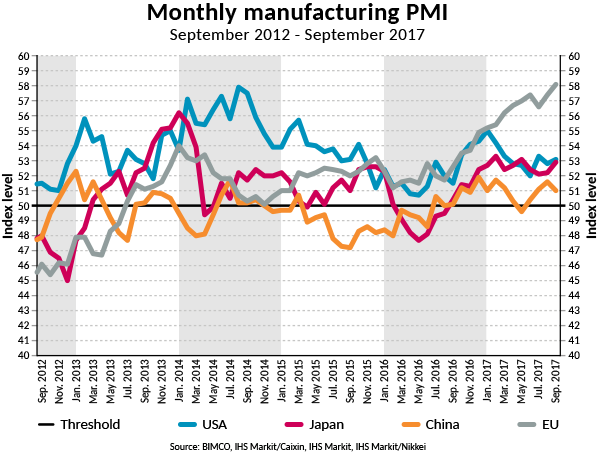 There is an overall strengthening in the European manufacturing sector and it is now growing at the fastest pace since 2011. This strong manufacturing growth, combined with rising exports indicates that the growing output in Europe is being consumed outside of European borders and therefore the production uptick benefits both short and deep-sea shipping activity.

BIMCO continue to emphasise that an uptick shouldn’t lull policymakers into a false sense of security, as comprehensive and co-ordinated action will still be required to support the current positive economic development.

The IMF has upgraded its projection for the Euro Area by 0.2 percentage points for both 2017 and 2018. Therefore, the expectation is now for a growth of 2.1% in 2017 and 1.9% in 2018. This increased projection comes at the back of a further increase in the July outlook.

Japan faces the same subdued wage growth as Europe and the US, while also experiencing a low unemployment rate. Despite this, the Bank of Japan has pledged to withhold its monetary easing until the 2% inflation target is reached.

Though structural reforms are one of the “three arrows” in Abenomics, there has been little sign of such action. Labour market flexibility and labour supply need to be a key focus of such a reform, especially given an aging population. With the Japanese election brought forward these reforms may be postponed, but on a positive note, the anticipated rise in consumption tax has been confirmed.

The IMF has upgraded its expectations for Japan’s economy by 0.2 percentage points for 2017 and a 0.1 percentage point for 2018, amounting to a growth rate of 1.5% in 2017 and 0.7% in 2018. This adjustment is driven by stronger global demand, and policy actions taken by the Japanese government to support the fiscal position. The pace of the expansion is expected to slow down in 2018.

As China’s GDP growth seems to have stabilised just below 7%, the focus of economic reforms on the way will be to rein in credit expansion, cool down the inflated housing market, while maintaining the current growth rate. If the new reforms reduce fiscal support - which has supported the commodity markets - it will most likely dampen the growth rate for commodities into China.

2017 has shown a “new” China, stepping up its focus to reduce emissions and smog by exchanging domestically sourced commodities for commodities extracted outside of China. This has been beneficial for the dry bulk shipping industry.

As all indicators are pointing up, with a few exceptions, and the IMF is lifting its target for world trade volumes from 3.8% to 4.2% for 2017, the global shipping industry cannot ask for a better outlook for growth in this ”new normal” world. While segments in the shipping industry may face gloomy or even dark prospects for future earnings, this stems from self-inflicted damage and not from lack of support and demand.

This self-inflicted damage creates a fundamental imbalance causing supply to outgrow demand, the effects of which will last for several years in some segments if there is no focus on bringing down supply growth.

For the demand side to reap the full benefits of this possible global upturn, globalisation must be embraced and the gains from open trade must be a key focus of the policymaker’s agenda, replacing any inward-looking policies. According to the IMF, the move towards protectionist policies is partly caused by depressed wage growth, as it increases scepticism towards the benefits of cross-border economic integration in public opinion.

Lastly, it is essential that policymakers exploit the opportunity given by the cyclical upturn to undertake critical reforms. This provides a window to stave off any downside risk and to raise potential output. Structural reforms, combined with fiscal policies focused on growth, can boost productivity and labour supply.

Contact online
BACK TO: Tanker shipping: Q4 only delivers temporary upside as overcapacity remains an issue NEXT: Dry bulk shipping: take good care of the recovery