US seaborne coal exports are up 57% in total volume and 61% in terms of tonne-miles for the first five months of 2017 compared to the same period last year. If US coal exports remain high throughout 2017 it will have a solid effect on the global seaborne coal trade and support the overall improvement in the dry bulk shipping industry.
US seaborne coal exports have turned years of negative growth around and are climbing for a third quarter in a row. The increase in total volume is predominantly driven by a growing demand from European importers. East Asian buyers have also ramped up their import of US coal, which is beneficial for the dry bulk shipping industry as it generates a substantial amount of tonne-miles, relative to other destinations.

BIMCO reported back in December 2016, that the tonne-miles from US coal exports halved over three years due to long-haul routes carrying coking coal to East Asia not operating to the same extent and diminishing demand from Europe. After reaching the lowest levels for exported coal in Q3 2016 since Q1 2007 in terms of total volumes, US coal exports now look to return to recognisable heights and become a dominant player in global seaborne coal transport once again.

BIMCO’s Chief Shipping Analyst Peter Sand comments:” A rising US coal trade has a multiplying effect on the dry bulk shipping industry, as it provides some of the longest sailing distances. East Asian importers source 61% of their US coal from Norfolk, Virginia and Baltimore, Maryland and thereby accept a journey of up to 45 sailing days at an average speed of 13 knots (14,000 nautical miles)”. 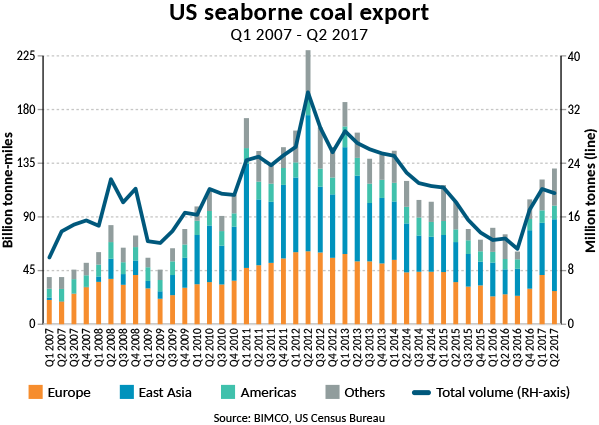 US seaborne coal exports are up 57% in total volume and 61% in terms of tonne-miles for the first half of 2017 compared to the same period last year. As the average sailing distance has grown more than total volume, it emphasises how the US has exported more to importers further away, primarily to East Asian destinations.

Europe imports the highest volume while East Asia generates the most tonne-miles
The main importers of US coal for the first half of 2017 are the Netherlands, South Korea and India, importing 32% of all US seaborne coal export. The most influential importers for the dry bulk shipping industry are South Korea, India and Japan, generating 49% of total tonne-miles. 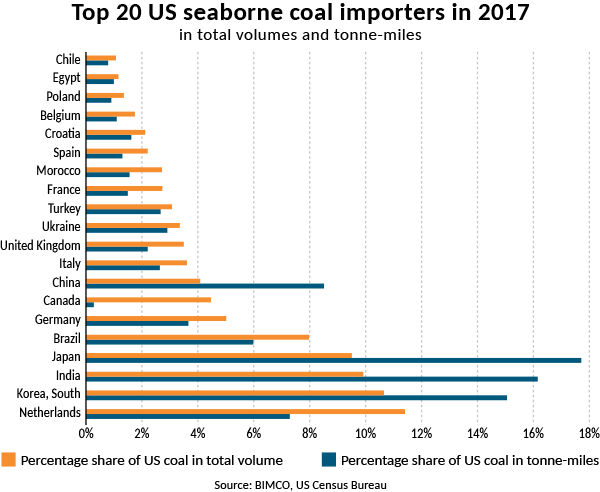 Europe continues to be the largest importer of US coal and has for the first half year of 2017 imported 41% of all US seaborne coal exports. Europe has sourced 4.8 million tonnes more coal from the US in the first six months of 2017 compared to the same period in 2016, which is an increase of 43%. US coal exports to Europe occupies both the panamax and capesize segment.

The Netherlands have, in the last 10 years, been the main importer of US coal both in Europe and on a global scale. Due to its shorter distance to the US East Coast compared to East Asian buyers, it has in the past 10 years only generated the fifth highest number of tonne-miles.

East Asian importers are the main reason why tonne-miles are growing more than total volume, despite only 24% of total US seaborne coal exports were destined for East Asia in 2017. The East Asian imports of US coal surged 172% in the first six months of 2017 compared to 2016, amounting to an increase of 5.9 million tonnes. US coal shipments to East Asia generated 112% more tonne-miles in the first half year of 2017 compared to the same period in 2016. South Korea is the most influential importer in terms of tonne-miles over the last 10 years, but it is only the fifth biggest importer on a global scale measured in volumes imported.

Higher US coal production but still close to lowest level since 1978
The US have produced 351 million tonnes of coal in the first half of 2017, this is an increase of 16% compared to the same period last year, amounting to an increase of 49 million tonnes. This year–on–year increase does not indicate a high production level compared to years prior to 2016, as the amount of coal produced in 2016 was the lowest level since 1978.

Peter Sand adds: “If US coal exports remain high throughout 2017 it will have a solid effect on the global seaborne coal trade and support the overall improvement in the dry bulk shipping industry”.

Contact online
BACK TO: BIMCO webinar on shipping industry outlook NEXT: Dry bulk and tanker newbuild contracts 20% higher than 2016