There are few purely economic incentives to demolish VLOC’s converted from VLCC’s, as they have secured freight rates and employment on long-term time charter contracts a long time ago. There is also no incentive to sell your ship for immediate profit, as the value of a converted VLOC currently in service, is the same in the secondhand market as the demolition market.

With an average age of 23.8 years, the fleet of Very Large Ore Carriers (VLOC) converted from Very Large Crude Carriers (VLCC) are vintage compared to similar ships. The average age for a non- converted ore carrier above 200,000 DWT is 5.7 years. Therefore, there is a huge age gap of 18.1 years between converted VLOC’s and normal VLOC’s.

Still, the age itself is not the all-important explanatory factor behind a demolition decision. Naturally safety is a big issue, but also the fact that they are still employed on a contract.

There are few purely economic incentives to demolish VLOC’s converted from VLCC’s despite the comparable high age. Some of the reasons being: still running on time charter contracts and identical prices for demolition and secondhand sales.

Most of the converted VLOC’s are operating profitable on fixed routes and schedules, as they have secured freight rates and employment on long-term time charter contracts a long time ago. This allows them to deliver a positive return on investment where others may fail, despite not being the most modern ship design around.

As the value of a converted VLOC currently in service, is the same in the secondhand market as the demolition market, there is neither an incentive for selling your ship for immediate profit. 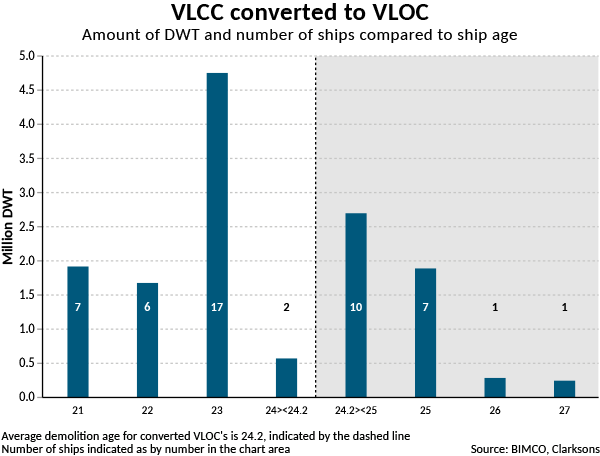 The lifespan of a ship depends on a variety of parameters, such as maintenance, general fatigue and the design itself.

Without specific knowledge about these parameters it is impossible to draw specific conclusions on the general lifespan or projected life of any ship type. 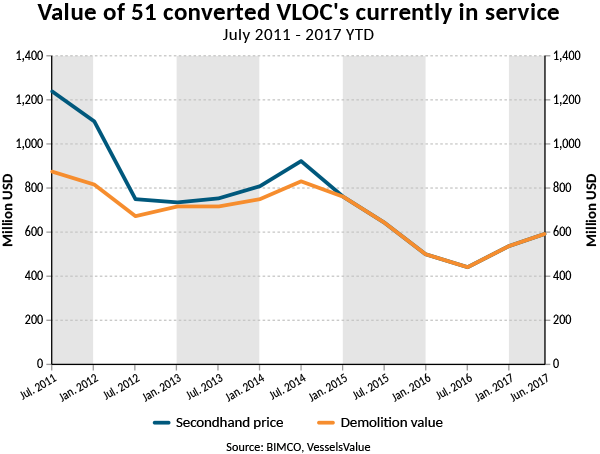 24% of the total VLOC fleet is converted from VLCC’s, as 51 converted VLOC ships are currently in service, amounting to a total of 14 Mio. DWT compared to a total of 214 capesize ships above 200,000 DWT classified as ore carriers.

In comparison, the existing newbuild orders for 32 valemax ships (400,000 DWT each), amounts to 12.8 Mio. DWT. This capacity will enter the dry bulk shipping fleet and will be deployed on the Brazil to China route, where they will be able to carry 51.2 Mio. tonnes of iron ore, per annum on multi-year time charters.