Container shipping: New networks come into focus as the supply side holds the key to improvements

The tonne-mile demand side has grown by an average of 3.4% annually during 2012-2016. This is a new and lower growth level that has taken some time for the industry to get used to. Every year in which the supply side outstrips the demand side, the fundamental market balance worsens. 2016 was the one year that was different to the previous four years. 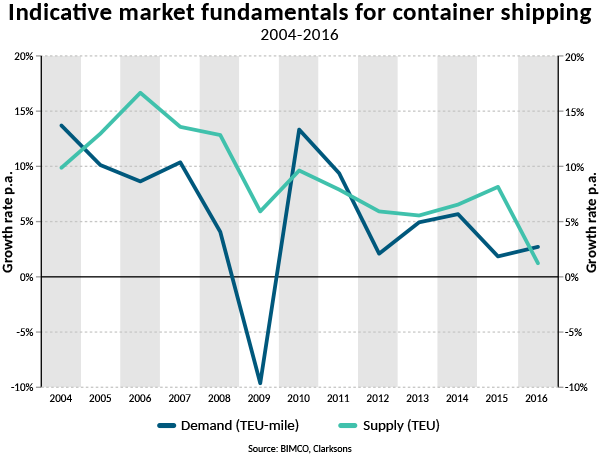 Not only is the demand for transportation of containerised goods higher than its most recent low in 2015, but the demand for shipping capacity appears to have altered. What have changed a lot since our last container shipping market report, which was only three months ago, are the charter rates. For many small to medium sized ships, they have gone up sharply since mid-February. Nevertheless, the reasons behind the better charter rates seems to be less clear.

2017 appears to have started well on most trades, although the Chinese New Year notoriously affects the individual data for the first two to three months.

The growth rates on other trades may need to include March as well, to show the real trend. BIMCO’s own US West Coast growth indicator shows a drop of 2.2% on a year-on-year basis for the combined months of January and February. Whereas BIMCO’s own US East Coast growth indicator of the same, shows a growth rate of 9.4%. In total, US imports of loaded containers went up by 2.8%.

Meanwhile Container Trade Statistics (CTS) reports a 5.2% growth in volumes on the Far East to Europe trade in January and a -9.2% drop in February. In total, demand fell by -0.9%. 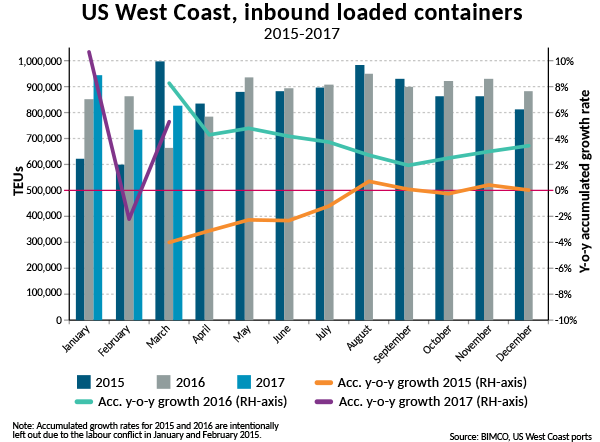 Supply
Since March 2016, the container ship fleet has reduced in size by 100 ships. The strong trend of large ships being delivered and smaller ships getting demolished has meant that the TEU capacity of the fleet has increased by 40% since the start of 2011. At the same time the number of ships has only increased by 3.3%.

As the fleet is being split into main liners and right-sized feeders, abundant capacity is being removed among the smaller-than-3,000-TEU feeder ships and the narrow beam (panamax ship fleet).

In the past four years, more than 800,000 TEU of narrow beam (<32.3m) panamax ship capacity has been removed. This is equal to half of all demolished container shipping capacity during that time. Nevertheless, the total fleet still holds 3.2 million TEU of narrow beam (<32.3m) panamax capacity (16% of total capacity). This is down from 3.9 million TEU (24% of total capacity) four years ago.

BIMCO expects the container ship fleet to grow by 2.9% in 2017, under the assumptions that 450,000 TEU will be demolished and 1 million TEU will be delivered. For that to happen, the current demolition interest must cool somewhat and the delivery pace must pick up. Nonetheless, both assumptions are likely to happen in a market that is improving. In fact, it is already happening.

Currently the fleet is getting smaller by the day, as 152,800 TEU has been delivered in 2017, offset by as much as 195,555 TEU being sold for demolition. This means the fleet is smaller today than it was at the start of the year. 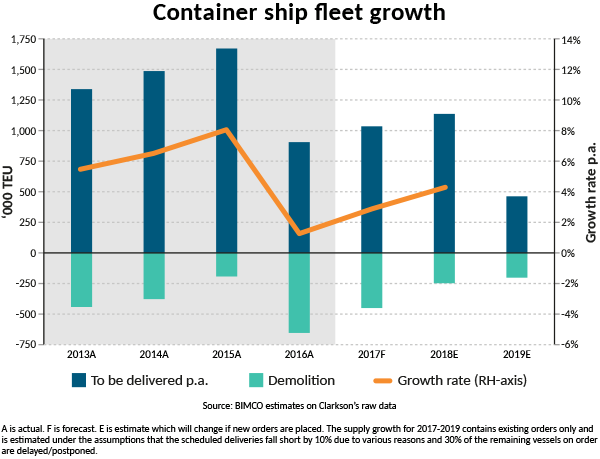 As of 3 April 2017, the idle fleet stood at 0.97 million TEU, according to Alphaliner (4.8% of total fleet). This is a sharp decline from close to 1.6 million TEU at the start of the year. All container ship sizes have seen the idle fleet decline. Most significantly, the 3,000-6,000 TEU segment had 130 idle units’ half a year ago, which had become 58 units by early April.

Outlook
The year has started on solid ground, in terms of both the development of the demand side and the ongoing work on keeping the lid on fleet growth. 2016 proved to be a year of upheaval. Most alliances were broken up to form new ones; one line went bankrupt, and in combination, shipowners managed to cut deep into the excess capacity of the fleet. Gains from a low-fleet supply are instantly reaped, whereas the benefits from new network structures take a bit more time.

BIMCO expects the container shipping industry to continuously optimise networks and make them more efficient. Cutting costs where it’s still possible and making the most of the fleet available remains essential to reaping the benefit of the individual alliance members. As cost cutting is a huge part of this, the effect on freight rates is not the only indicator of a successful implementation. 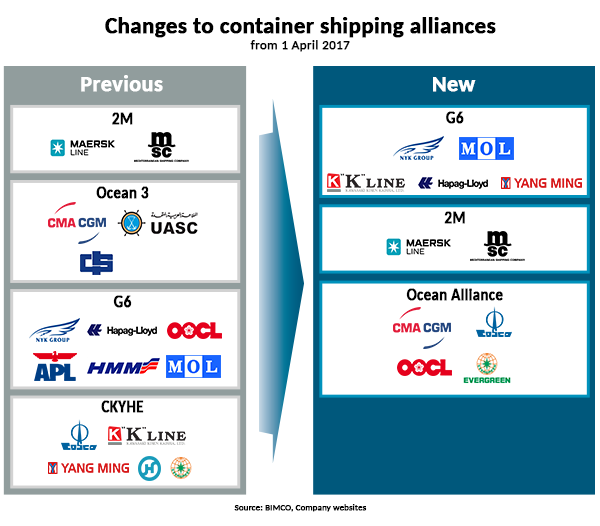 Before getting carried away, we should remember that 57% of all demand, as measured by TEU miles, is generated by non-east-west trades – trades that are particularly impacted by the recent years’ cascading of tonnage from the east-west trades. Another two-tier market is in the making.