The freight rates managed to gain momentum through second half of 2016, due to measures taken from the shipping lines in terms of network optimisation, scrapping and more careful deployment around the peak season.

As the freight rates increased through second half of 2016, 2/3 of the trades on the SCFI closed 2016 at a higher rate than in 2015 and three trade routes hit the highest USD per TEU for a week 52 in more than five years, those where trades from Shanghai to Santos, Durban and Australia/New Zealand. 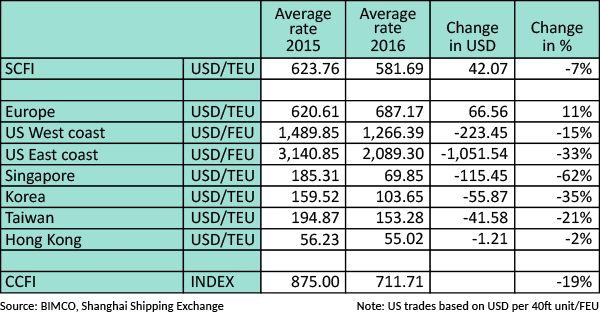 China Containerised Freight Index (CCFI) reflecting China’s nationwide export of containers, is showing a 19% drop from 2015 to 2016. The short-lived spikes in spot rates during H2 2016, is not included in the CCFI compared to the SCFI and thereby the CCFI achieves a higher negative growth in 2016.

The CCFI includes both spot and long-term rates based on the actual transactions within a two weeks periods, while the SCFI focuses on the average spot booking price for one week. By that, the CCFI reflects the real progress in container shipping rates on a short-term basis. Thereby, the CCFI convey the current tendency in the container freight development and the SCFI indicate the current market development.

Furthermore, the SCFI concentrates on export containers from Shanghai Port only, while the CCFI covers the 10 major ports in China.

Despite the average rate for 2016 is lower than 2015, 2016 might stand out for something positive, where the container shipping lines took some of the measures needed to adapt to the new normal, where the growth in demand is equal to the GDP.

The container shipping lines achieved a lower growth rate in supply higher than the demand growth for the first time since 2010, by using the tools they had at hand and consolidated, scrapped and postponed deliveries.

If the Trade-to-GDP-Multiplier stays at the current level and the International Monetary Fund is correct with their projection, the container shipping industry will be status quo in 2017 and the freight rates will most likely stay at the same level as last half of 2016. However, the container shipping lines will increasingly focus on reaping the benefits of consolidation and we will most certainly see their profits go up.


US earnings are the main driver for a lower average rate
The container shipping lines operating from Shanghai to Europe earned 66.56 USD more per TEU transported in 2016 compared to 2015. The average freight rate for Europe in 2016 was thereby the only of the major trade routes to surpass 2015 level.

Container freights rates in second half of 2016 does not revive intra-Asia
Container shipping lines operating trade routes from Shanghai to South Korea, Taiwan, Hong Kong and Singapore all achieved a lower average rate for 2016 compared to 2015. The four trades did not experience similar increases in the rates, as the main trades during H2 2016 and remained on par with the poor H1 2016 level.

With the mergers and newly established alliances entering into force and the supply side handled with care, the container shipping industry will hopefully see better profits and fleet utilisation.

Our most recent shipping market overview and outlook reports on related issues:

Contact online
BACK TO: Macro economics: 2016 brings lowest GDP growth rate since financial crisis began NEXT: The shipping market in 2016 and looking forward