Tonne-miles from US coal exports halved over 3 years

Since Q1 2013, the significance of US coal exports has seen a considerable setback, with 2016 achieving the same levels as 2009. This is due to the long-haul routes carrying coking coal from the US East Coast and US Gulf Coast to East Asia not operating to the same extent and the EU is demanding less thermal coal.

When BIMCO first published its story concerning US coal in 2013, US coal exports had the most significant coal trade in the world, measured by tonne-miles.

This decrease in tonne-miles is a contributing reason to the current state of the dry bulk shipping market, as US coal trade was responsible for 14.8% of the world seaborne coal trade in 2012, but only 7.7% in 2015.

The tonne-miles multiplier which indicates the average distance coal is being travelled, has not changed particularly in that period and levelled around six, since the peak in 2011. The unchanged multiplier emphasises that the diminishing tonne-miles are solely due to a reduction in volumes across the board.

This means that the long-haul routes from the US East Coast and US Gulf Coast to East Asia still operate, but not to the same extent as in 2012. However, they have decreased at the same amount as the rest of the US coal export trades”.

Coking coal to East Asia has had the second lowest decrease of the US seaborne coal trades in transported cargo volumes, dropping 12% from H1 2015 to H1 2016. Coking coal to East Asia is primarily exported from the US East Coast and US Gulf Coast and it is the coal trade route from the US with the longest sailing distance and thus generates the highest tonne-miles per tonne transported.

Therefore, any fluctuations in this trade influences the dry bulk shipping market the most. 40% of all coal exports from the US to East Asia came from the capesize-accommodating port in Baltimore, Maryland, which emphasises that the East Asian buyers accept a very long distance of more than 14,000 nautical miles when they import coking coal from the US.

Chinese demand for US coal close to zero

Japan and South Korea are the importers that are keeping the East Asian tonne-miles high, as China has not imported any significant amount of coal from the US in the last two years. The tonne-miles generated from Chinese imported US coal is at its lowest level since 2009. 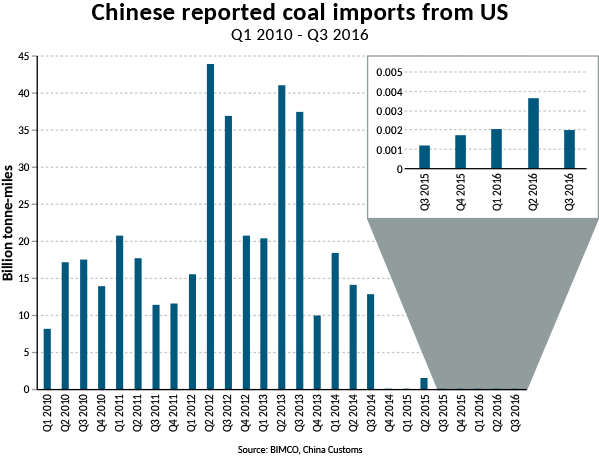 Peter Sand adds: ”In 2012, the spikes in tonne-miles from East Asia was solely generated by Chinese coking coal demand. However, since Q3 2014 the Chinese tonne-miles have been close to zero. This is due to China focusing on its regional suppliers and has, in the first three- quarters of 2016, imported 84.1% of all coking coal from Australia and Mongolia and next to nothing from the US.

This is a large loss for the dry bulk shipping industry, as the Chinese coking coal demand is now covered by shorter sailing distances from Australia, compared to sourcing from the US East Coast and US Gulf Coast, and coal transported by land from Mongolia”.

The European market is the overall main importer of both US thermal coal and coking coal, based on transported cargo volumes. The coal exported from the US to the EU is down 38% for the first half of 2016 compared to the same period in 2015, but the EU is still claiming a 43% market share for H1 2016 compared to 47% in H1 2015. Despite this larger decrease - both measured on transported cargo volumes and percentage compared to East Asia - the effect is not as significant when the demand is measured in tonne-miles. This is due to the European demand for US coal being covered by exports from the US East Coast and US Gulf Coast, where the sailing distances are substantially shorter than the coal exported from the US to East Asia.

The coal exported from the US to the United Kingdom (UK) dropped by two million tonnes from H1 2015 to H1 2016, a total decrease of 83%. This is the biggest decline for coal exported from US to a single country. This is primarily due to the doubling of the UK carbon price floor (CPF), which has significantly increased the price of coal-fired energy production in the UK. Therefore, the US thermal coal exports to the UK are down 98% compared to the coking coal export being down 63% for H1 2016 compared to H1 2015. Read more about the declining UK seaborne coal import.