The refiners and traders, primarily in Asia, have reduced their appetite for crude oil as margins and profits have diminished. Global oil prices came down from a mid-2015 level around USD 60 per barrel to bottom out just below USD 30 per barrel by mid-January 2016. Only to rise again and float around USD 50 per barrel from June onwards.

Seasonality (Q2 and Q3 normally seeing low demand) and record high global stock levels of crude oil and oil products have brought an end to the strong freight market enjoyed since the second half of 2014.

This development comes as no surprise. Back in January 2016, BIMCO warned, “that a ‘correction’ in demand may be fairly steep once it arrives”. The factors mentioned back then, are the same ones that matter today. For the oil tanker market – which has had the highest supply side growth in the last six years – a reversal of fortunes was inevitable. 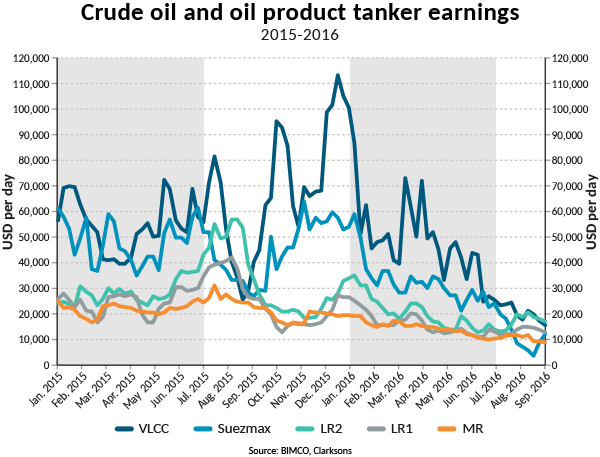 End consumption of refined oil products by industry or individuals remains the factor to watch out for as the overarching driver of demand. All other factors may be significant and affect the shipping market and the freight rates in the short term, but remain secondary in the mid to long-term as fundamental demand drivers. IEA expects global oil demand growth to slow to 1.5% in 2016 and 1.3% in 2017.

Changes to trades are also happening in the US. In December 2015 the US Government lifted their restrictive policy on crude oil exports. In the first five months of 2016, the US exported on average 499,600 barrels per day (bpd), nearly 2% or 9,200 bpd more than in the same period in 2015. Not a huge volume change, but trading partners have changed, which is positive for tanker shipping. Canada’s imports decreased on a year on year basis, for the first five months of the year by 35% (or 812,000 bpd) from 2015 to 2016. 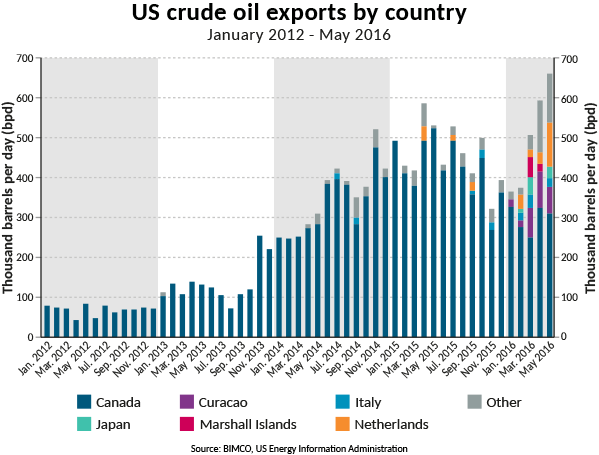 Before 2016, the US exported crude oil to Canada only, with a few minor exceptions. In March 2016, total crude oil exports to other nations exceeded exports to Canada alone for the first time since April 2000. That trend, which is positive to seaborne shipping, has continued. In May 2016, exports to countries other than Canada accounted for 53% of all exports, whereas Canada’s share went down to 47%.

Aside from Canada, US exports of crude oil during the first five months of 2016, averaged at:

Increasing export volumes of crude oil to countries that are not in close proximity to the US have been positive.

While the US has grown its seaborne export of crude oil, crude oil imports into the US east coast have grown too. Domestic production has come down and the price spread between WTI and Brent has narrowed markedly since September 2015, from USD 6-10 per barrel to USD 1-3 per barrel in 2016.

Limited fleet growth is key to keeping freight rates at a profitable level. This lack of demolition means the supply of new tonnage weighed down the market, making the shift to a fundamental imbalance quicker and harder felt. Especially as the growth rate on the demand side is coming down from last year’s peak.

Overall, the delivery pace has been quite steady in the first eight months, seeing 12.5 million DWT of crude oil tanker capacity delivered, leading to a fleet growth of 3.2%. For the final four months, BIMCO expects the delivery pace will pick up as more than 10 million DWT of new capacity is set to enter the market, bringing crude oil tanker fleet growth up to 5% for the full year.

Demolition activity involving product tankers has been low too - as expected. Just 15 tankers have been sold to cash buyers for subsequent scrapping. Set against the high pace of newbuilds being delivered, the total product tanker fleet is now 3.4% larger by early August compared to the start of the year. As this pace seems to be continuing for the remainder of the year, the industry will face the largest inflow of new tonnage since 2010.

The LR2 segment has seen the largest inflow of capacity - growing that part of the product tanker fleet by 7.1% year to date. 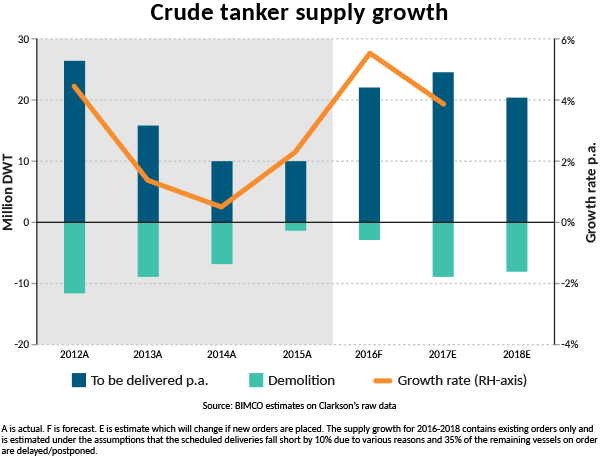 BIMCO reiterates that, for the mid-term, the supply side for tankers is on the heavy side. This will have a negative impact on freight rates as it is likely to exceed the growth of the demand side. 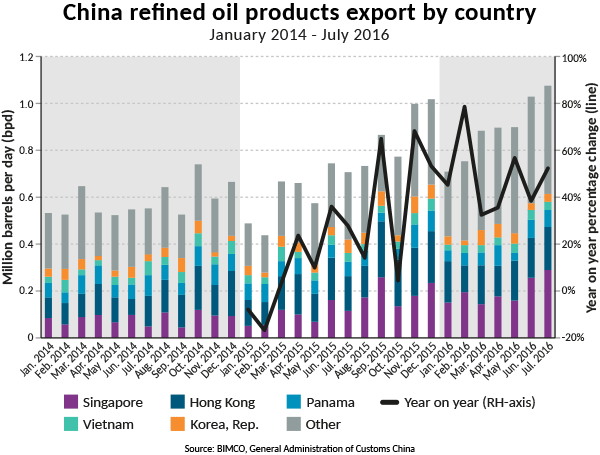 The five major importing countries of Chinese refined oil products had a combined market share of 59.5% between January 2014 till July 2016:

Growing export volumes from China seems to have a positive effect on the tanker market.

China is expected to continue growing its crude oil imports for the rest of the year, but at a slightly lower growth rate.  It’s latest Strategic Petroleum Reserve appears to be filled now. Crude oil prices are not as low as they have been and demand growth from the independent teapot refineries now tends to provide shorter hauls than before - and in comparison to the national refiners who prefer crude oil from West Africa and the Arabian Gulf.

Imports of crude oil into US and India are expected to grow over the rest of the year, whereas European imports seem to be on par with 2015.

In spite of a decisive reduction in freight market rates, BIMCO expects that average VLCC earnings in 2016 will still sit above those of 2014. But the foreseen market changes have proven to be slightly harder than expected with a negative impact on freight rates in all other oil tanker segments. BIMCO now sees average earnings for all other oil tanker segments (Ex VLCC) below those of 2014. Currently, average earnings year to date in 2016 are slightly above the full year average of 2014.