Finally, we can conclude that a one-sided focus on monetary expansion handled by central banks is not enough anymore.

In the early aftermath of Brexit, the International Monetary Fund (IMF) published their new World Economic Outlook (WEO), where they revised their previous growth forecast published in April. The global growth outlook for 2016 and 2017 has been reduced and according to the IMF, the deterioration reflects the uncertainty of Brexit’s economic consequences.

In general, growth expectations for global GDP have come down by 0.1 percentage point for both 2016 and 2017. The drivers for this decline are the advanced economies, mainly the US and Japan. The advanced economies as a whole have been downgraded by 0.1 percentage point for 2016 and 0.2% for 2017 – and are now levelling at a 1.8 % growth rate for both years. This might be the result of a normalised monetary policy in the US and an extraordinary monetary policy in Japan not being effective. The revised numbers don’t bode well for shipping in general and the container business in particular. Continued demand growth from consumers and industries in the advanced economies is a critical demand component for the container shipping industry.

The IMF does not expect the combined growth for the emerging markets and developing economies to be affected. Their projection remains at the same levels as in the April WEO – a growth of 4.1 % in 2016 and 4.6 % in 2017. As the emerging markets rely on commodities as their main trade, this will not add to the headache for the currently depressed dry bulk shipping industry. 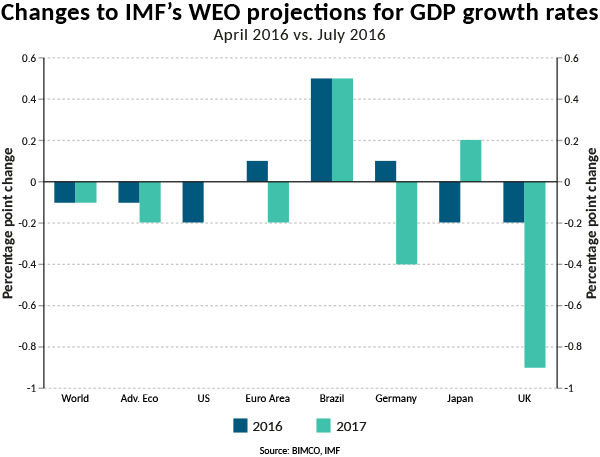 Despite IMF expecting the Brexit only to impact advanced European economies, they have revised their 2016 GDP growth projections for the whole Euro Area upwards by a by a 0.1 percentage point to 1.6%. This positive revision would have been higher without the Brexit. The IMF are now in line with BIMCO’s early 2016 expectations, which stated that the economic situation in Europe could improve gradually and become a potential positive story for 2016.

Advanced economies have over the years generated more trade growth than emerging markets. It is important that these economies help global GDP growth back on track. According to the World Trade Organisation (WTO), all nations must also resist the urge for protectionism.

The necessity for this comes as trade-restrictive measures have become an increasing challenge for trade developments. WTO reported 22 new trade-restrictive measures from its members each month on average between October 2015 to May 2016. This is the highest recorded monthly average since 2011. These restrictions, intended to protect domestic markets, are the last thing the global economy needs and bad for the Trade-to-GDP-multiplier as they are blocking developments in trade flows and have a negative knock-on effect for economic growth.

IMF have also revised their projections for the US GDP and expect 2016 to be down by 0.2 percentage point to a total growth rate of 2.2%. Headwinds from a strong US dollar and lower investments in the energy sector have caused the revision.

Lowering investments in the energy sector may or may not be a good sign for shipping. A decrease in US oil production could prompt crude oil imports to rise while reducing the export of oil products at the same time.

BIMCO has previously reported a slowdown in US industrial production, which was down seven months in a row compared to the previous year. A decrease in investment into the energy sector will most likely support this trend. This could also be a sign that the US is starting to draw down on the high oil stock levels, which have been built up since mid-2014. 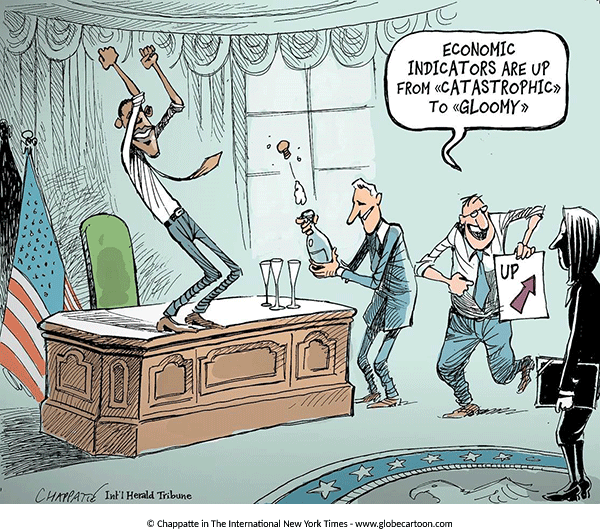 We had hoped for a positive surprise of an economic rejuvenation in Japan – with an expectation that political initiatives would have had an impact since the start of 2016. Unfortunately, industrial production growth rates show that this is not the case. Now, IMF have taken their GDP growth rate projections down by 0.2 percentage point to 0.3 % for 2016. This is a clear indication that “Abenomics” is not working as intended, therefore bolder reforms must be implemented to relaunch the struggling Japanese economy.

China’s ongoing rebalancing has seen a successful economic turnaround so far this year. Its economic development rose above expectations, so despite uncertainty the concerns over the Chinese economy have not been realised. This gives an indication that market-driven activity was somewhat stronger than expected. This is also quietly reflecting the execution of monetary and fiscal stimulus undertaken by the Government to ensure that the annual GDP growth target is met. IMF have increased their 2016 projection for China by 0.1 percentage point to a 6.6% growth rate.

The economic bounce back in China also saw electricity production go up by 2.8% in 2016, compared to the same months in 2015. June 2016 became the month with the highest electricity production ever in China – up by 7% compared to a previous all-time high in August 2015. This has positively affected the dry bulk industry during the first half of 2016.

Amid Brexit volatility, Europe is fulfilling BIMCO’s expectations and improving gradually. Its industrial production growth rate is proving to be better than both the US and Japan, showing a positive development in demand. To continue the positive trend, BIMCO would like to stress the importance of the European Union focusing on job creation and growing economic activity.

BIMCO does not expect the UK’s referendum result to have a significant impact on global shipping. However, the UK and EU still have a key role to play in reducing uncertainty and making a smooth transition. This should soften the impact on growth for vulnerable European economies.

Finally, we can conclude that a one-sided focus on monetary expansion handled by central banks is not enough anymore. We need supportive and concrete fiscal policy initiatives to be taken. This is more important than simply maintaining a zero interest rate. 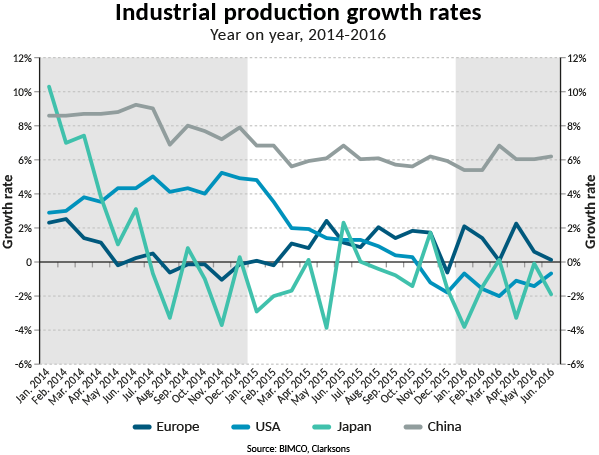 The industrial production growth rate is an indicator for activity in manufacturing, mining, electric and gas industries. A positive growth rate means demand for the products of these industries are growing. It is a worrisome development for seaborne shipping if demand doesn’t grow.

It is however positive to note; that China appears to perform better than expected, levelling at a 6% growth rate for its industrial production. This is likely to be a sensitive indicator – and one that will be impacted by the policy initiatives and a massive stimulus package focusing on infrastructure investments. This will spur dry bulk shipping demand.

China’s consumer spending remains strong, as July grew with 10.2 % compared to last year and is well in line with the 10.3 % growth rate year to date in 2016 compared to 2015. China is currently undergoing a transition, where growth has previously relied heavily on infrastructure investments, but will, in future, be increasingly consumer driven. The infrastructure investments have been good for the dry bulk industry, but if consumer spending continues its trend, it will be a beneficial development for container shipping, especially intra-Asian. 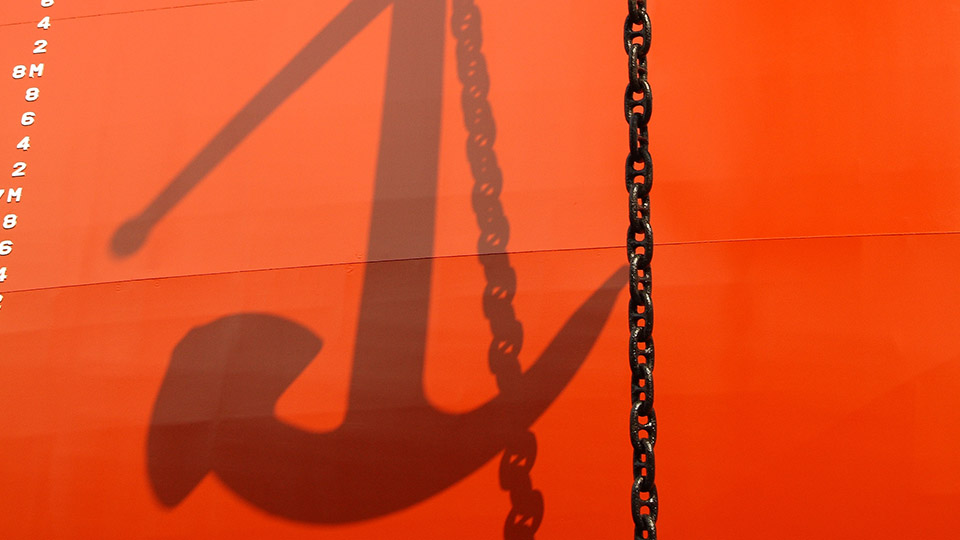