Demand. The dry bulk commodity imports into and exports out of China we have seen in the first half of 2016 are very positive – and nothing short of extraordinary. But, putting it into perspective, compared to the devastating freight rate levels over the same period, it highlights that something is very wrong in the dry bulk market. The market is nowhere near balanced.

The dry bulk commodity imports into and exports out of China we have seen in the first half of 2016 are very positive – and nothing short of extraordinary. But, putting it into perspective, compared to the devastating freight rate levels over the same period, it highlights that something is very wrong in the dry bulk market. The market is nowhere near balanced.

BIMCO’s data on seaborne iron ore imports into China, shows a growth of 9.6% for H1-2016 as compared to H1-2015. With seaborne coal volumes shipped into China during H1-2016 being on par with H2-2015, this represents a 5.0% growth on H1-2015. A continued surge in thermal coal imports seems limited, as hydropower electricity generation due to heavy rainfall is likely to squeeze coal consumption (used for power generation) yet again. 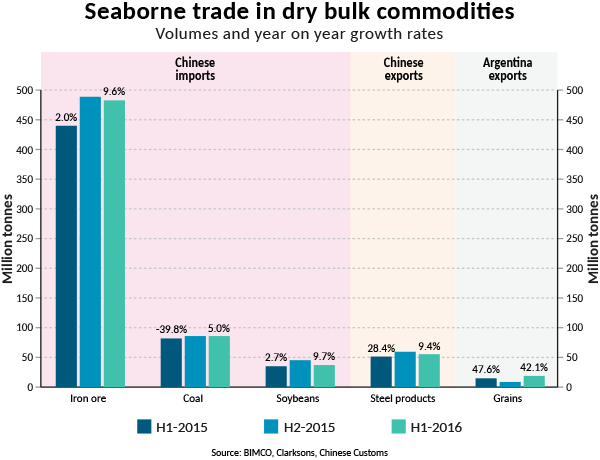 Among the minor seaborne commodities, Chinese steel product exports continue to support its high steel production – and therefore also the elevated imports of iron ore. Exports are up by 9.4% in H1-2016 compared to the same period last year. Trade barriers being set up against Chinese steel, primarily in the Western hemisphere, have little impact as most steel is exported to other Asian countries. Steel exports have been a steady and solid trade compared to Chinese coal imports, which were down in Jan/Feb but very strong in May/June.

At the same time, we witnessed appalling freight rates during the worst quarter ever (Q1-2016) making it a terrible first half of 2016. Year to date, the Baltic Dry Index is down by 26% on last year’s performance, which was already dreadful.

On 10 August, freight rate levels are merely covering operational expenditures (OPEX), with no contribution to cover overhead and financing costs. BIMCO expects the industry to be lossmaking for the full year.

The devastating freight rates have left asset values for dry bulk ships battered. A 2010-built capesize ship was valued by VesselsValue.com on 1 August 2014 at USD 49.75 million. Two years later, that same ship had lost 57.3% of its value and is now worth only USD 21.25 million. The pain is felt across the fleet; worse for older ships and slightly less severe a drop in value for newer ships.

As 31 million DWT of new capacity has entered into the fleet since 1 January 2016, the order book is slowly emptying. Currently standing at 110 million DWT, the order book is now down at a level not seen since late 2006. Forget about the order book-to-fleet ratio being at a 13-year low, that ratio is irrelevant. What matters is that the fleet will not stop growing unless an equal amount of capacity is demolished at the same time.

So far in 2016, 23 million DWT has been taken out of the fleet and sold for scrap. This means the fleet, year to date, has grown by 1.1% by early August. This level of scrapping is as expected. Nevertheless, it is still worrying that the level of demolition is not higher. The dry bulk industry is faced with the lowest earnings ever, with overcapacity being the main problem and demolition the silver bullet. Difficult as it is to part with your ship, it’s what the industry needs the most.

Over the course of the past two years, the dry bulk fleet (excluding handymax ships) has grown by just 2.3%. In contrast, the handymax fleet has grown by 12.9% - a net inflow of 308 new ships. None of the other dry bulk segments have grown substantially in numbers, but new ships have larger capacity than the scrapped ones, ensuring fleet capacity continues to grow.

This trend is set to continue for the rest of the year, despite the fact that demolition of handymax and panamax ships has been the strongest in 2016 - relatively. As handysize demolition has cooled off, while capesize capacity is steadily leaving the fleet, compared to the full year in 2015.

The rate of slippage in deliveries remains very high, but is slightly reducing from the 50% seen during Q2-2016. If this development continues, the fleet growth could reach 1.8% in 2016, which does not support an improvement in the market. 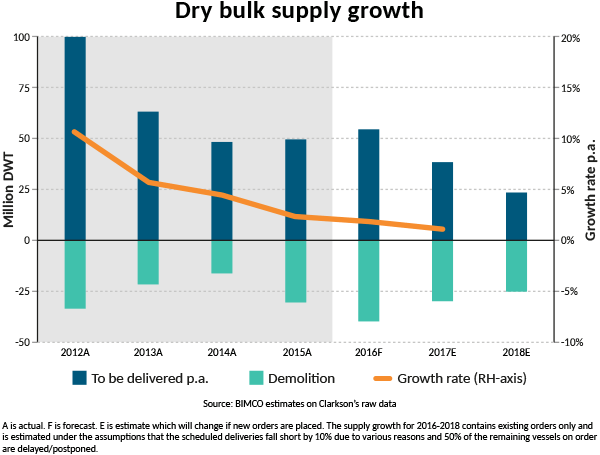 Increasing demand for iron ore is strong on the best trade lane of them all - Brazil to China. Shipments on that trade were up by 24% to reach 98 million tonnes in H1-2016 compared to H1-2015. Such a development used to mean much higher freight rates, but as 2015 passed, spot rates for capesize ships were only modestly buoyed by volume growth on this trade. BIMCO believes that a significant part of the iron ore has been transported on “Vale’s conveyor belt of Chinese-owned VLOCs”. If this continues to remove cargoes from the open market, volume growth on the Brazil to China iron ore trade - once the greatest driver of freight rates in the spot market - will no longer affect the spot market on this trade nor the general freight market significantly.

Handymax ships, on the other hand, have seen a flurry of new ships delivered and have fared well due to the broad-based demand growth outside the iron ore market. They will continue to do so. The fast growing handymax fleet, however, will also going forward put a lid on shipowners and operators’ chances of lifting freight rates into really profitable levels.

Growing iron ore imports have not meant higher steel production in China. We can conclude that some of the much needed substitution away from domestically mined, poor quality ore towards the import of higher iron content quality ores, and is happening at a fair pace.

This has stirred a surprising move by the Metallurgical Miners' Association of China (MMAC) who say the big three iron ore producers are “using low-priced dumping to crowd out higher-cost producers [in China]”. They claim 329 mines were shut last year and another 793 closed in the first five months of 2016. The MMAC crying foul is unprecedented. But for the dry bulk shipping industry, substituting the higher cost produced ore in China delivers much needed volume growth at sea.

For the coming months: September-November, BIMCO expects transported volumes to stay put - as the high volumes transported in recent months may have run ahead of underlying demand. Expect the freight rates to move up, down and sideways before moving up again in the fourth quarter of the year.