A new record year in dry bulk demolition under way?

The preliminary amount of dry bulk tonnage being demolished during the first half of 2015 is 20 million DWT. So could we be heading for a new demolition record level in 2015?

April 2015 saw 5.36 million DWT being retired from active service, which was the highest on record ever for a single month. The record came on the back of continued poor earnings and deteriorating market conditions in dry bulk shipping, evidenced by the Baltic Dry Index (BDI) staying below 600 from 2 February to 13 May.

In 2012, which is the largest demolition year on record with 33.4m DWT leaving the fleet, the monthly average was 2.79m DWT. So could we be heading for an even higher level in 2015? The preliminary amount of dry bulk tonnage being demolished during the first half of 2015 is 20 million DWT. During the first half of 2012 we saw 18 million DWT leaving the fleet.

Chief Shipping Analyst at BIMCO, Peter Sand, Says: “As the year progresses, BIMCO expects the demand side to get stronger in connecting with rising volumes. This should positively impact the market conditions but at the same time also limit the demolition activity.

In line with our recent adjustment of expectations for demolition activity in 2015, we do not see a new record year in spite of the strong start of the year." 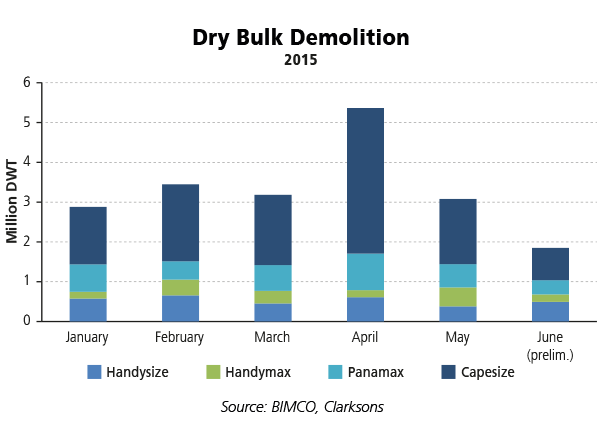 In the BIMCO news piece Busiest Capesize Demolition Market Ever from 7 May a total of 52 Capesizes had been demolished. Today that number has increased to 68. The record from 2012 where 70 Capesizes were demolished during the full year will soon fall.

The Handysize segment was the busiest sub-segment in all of the six months when you measure activity by number of ships being recycled. A total 104 Handysizes have left the fleet for good so far in 2015. The total number of dry bulkers being demolished now stand at 262 ships for the year.

It remains to be seen if Handymax demolition activity will remain subdued. The fleet growth is the largest amongst the dry bulk-segments as newbuilt Supramaxes keep coming from the shipyards. However, earnings have out-performed all the other dry-bulk segments from mid-February to end of June, leaving little reason for engaging more often with the blow torch for Handymax owners.

“The relatively low level of Handymax scrapping is a testament to a versatile sub-segment which is able to deliver what the market wants even when the overall demand side is losing ground. Fleet growth for Handymax/Supramax segments stand at 3.5% since the turn of the year”, adds Peter Sand.