Dry Bulk Shipping - Reality bites as 2014 dawns, but the demand base is stronger than ever

The arrival of January also meant that Capesize freight rates once again touched the ground following three extraordinary months of flying high. Q4-2013 represents the strongest quarter in demand ever, and the seasonal weakness of Q1 simply had to affect the level of freight rates negatively.
DEMAND:

The arrival of January also meant that Capesize freight rates once again touched the ground following three extraordinary months of flying high. Q4-2013 represents the strongest quarter in demand ever, and the seasonal weakness of Q1 simply had to affect the level of freight rates negatively. 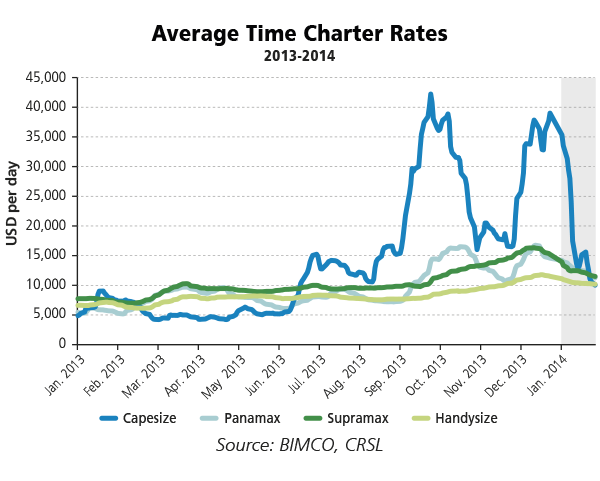 China has the biggest mouth in the dry bulk market and the Lunar New Year during the first half of February is likely to have a softening effect on rates in a continuation of the recent trend. Adding to additional pressure in the Handymax market is the Indonesian ban on exports of selected unprocessed mineral ores. In a move to secure more value from local mineral sources, Indonesia is now targeting processed nickel ore and bauxite. Indonesia is the world’s largest exporter of nickel ore and plays a significant part in global bauxite exports too.

The only alternative for China, which takes the lion’s share of Indonesian exports, is the typhoon-stricken Philippines, which is currently deemed unable to meet demand. However, the lower-grade ore may also prove to be unwanted by importers, who stocked up extensively prior to the Indonesian ban.

In 2013, demand for second-hand tonnage was at the highest level numbers-wise since the 2008-crisis. According to VesselsValue.com, 578 sales were concluded for a combined sales price of USD 7,386 million. This was 144 (33%) more than in 2012. Handysize tonnage was very popular, with 192 sales (2012: 121) with Supramax tonnage taking second place with 47% more deals sealed. The general trend was contrasted by the Capesize segment, which saw 13% fewer deals done in 2013. In the January market, buyers have focused their interest on Panamax tonnage – a development that has lifted the year-on-year price tag by 50%, from USD 18 million to USD 27 million in todays’ market. An astonishing comeback for the oversupplied Panamax segment. This is good news for a lot of owners, where their balance sheets now appear in much better shape. 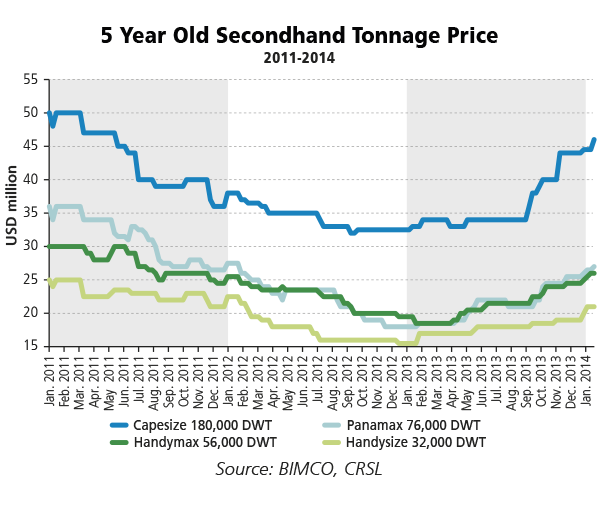 The demolition side of shipping will be amongst the “ones to watch” in 2014. As the order book keeps building up and eventually brings around more newbuild tonnage to cater for demand, owners might consider taking advantage of the strong demolition prices currently available to let go of less efficient ships.

In 2013, 22.2 million DWT was demolished, mostly in the smaller segments. This was 50% below the level of 2012 but considered a strong number, one that is unlikely to be repeated this year. The average age of a scrapped Capesize was 24, whereas the average demolished Handysize vessel was 30 years of age.

Going forward, try to consider this as a potential scenario: the current stock of dry bulk shipping capacity equals 728 million DWT. All ships built in 1993 or earlier comprise just 68 million DWT, which is less than 10%. In comparison, taking out all ships beyond the average scrapping age in recent years (29 years), comprises just 20 million DWT. History tells us that is unlikely to happen, especially in a rising market. Thus, BIMCO forecasts 14 million DWT (or 1.9% of the current fleet) will be demolished in 2014.

The fleet grew by 40 million DWT net in 2013, equal to 5.9%. BIMCO forecasts that 2014 holds 47 million DWT of newbuild capacity in store, which will be offset by 14 million DWT, leaving the fleet to bring supply growth of 4.5% around. Such a growth rate denotes an 11-year low. 2015 is already set for higher growth rates, so 2014 represents a short temporary dampening of the high growth of the fleet.

As regards the orderbook, the number of new Panamax orders has been extremely slim, in 2013 accounting for just 16% of the capacity ordered. This is a clear counterbalancing statement by the industry in response to the high fleet growth seen in that segment in the previous 15 months. Despite new orders for 197 Capesizes and 80 million DWT in total, the size of the dry bulk fleet today means that the orderbook-to-fleet ratio in the Capesize segment and total dry bulk fleet lands at just 20.5% and 20.7% respectively. 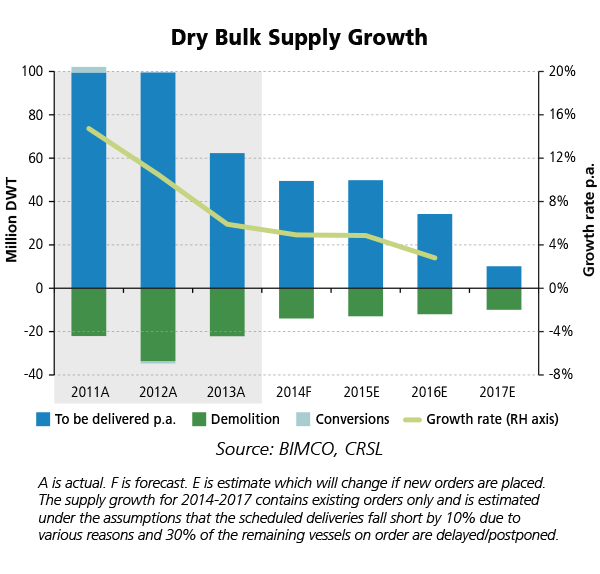 As Q4-2013 was a massively strong quarter, the seasonal slowdown in Q1-2014 is likely to weigh a bit heavier than normally on freight rates. A drop of 8.8% in selected commodity volumes represent a clear seasonal direction in Q1, but if we look a bit further into the remaining three quarters, they all provide a solid rebound in demand. 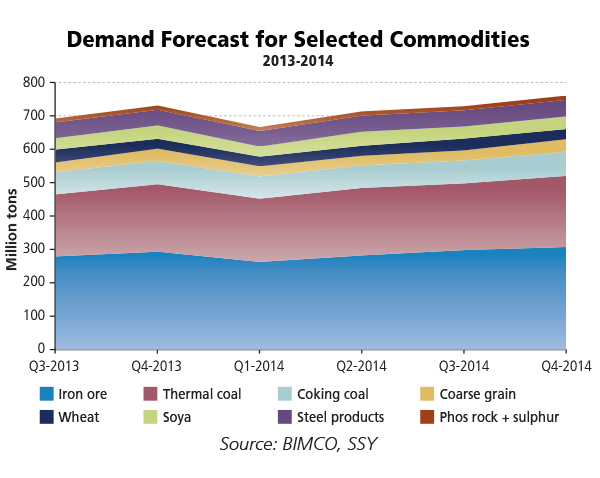 Chinese iron ore imports especially, but also the dry bulk market in general, is trailing off around the Chinese New Year season. Demand will be lower than in undisrupted months and thermal coal demand begins to ease as the Winter season in the northern hemisphere loses its grip. General shipping of nickel ore and bauxite will be far below normal levels because of the Indonesian ban– this in itself represents a change in demand beyond seasonality.

Similar to the trend forecast in BIMCO Reflections 2014, demand will be centred on the major commodities. That trend has already affected Capesize rates in the most brutal way, as earnings have now entered into the sub-USD 10,000 per day zone; a decline of some 75% since early December.

In all the other segments volatility is more subdued, and over- and undershooting (up or down) seen to a lesser extent. At the end of January, Handysize tonnage is still earning in excess of USD 10,000 per day on a T/C average. This is a three-year high.

Q1 holds little room for upside, with most focus being on weather related disruptions in e.g. Australia to intrude on normal trading as well as regulatory issues affecting not just Indonesian exports but Columbian coal exports and Indian exports/imports in general, e.g. via export duties.

As demand in volumes grew by 5.4% in 2013, the fundamental market balance only improved if slow steaming was applied more extensively. BIMCO believes that was the case, but only marginally. For 2014, an improvement in the market balance is clearly achievable. For it to materialise, owners and operators need to apply slow steaming to at least the same extent as last year. Only by managing the supply side carefully will higher earnings follow in the wake.

Contact online
BACK TO: Container Shipping - The increased demand from “Advanced economies” should increase the utilisation of containerships NEXT: Macro Economics - Fundamental changes ongoing, and a positive outlook materialising around the world