Bulk is not only about China even though it is a key driver. In this section, we have taken a closer look at the European seaborne coal markets, which is going through some interesting times right now. European coal demand has been in a slump ever since early 2009,
Listen to podcast of article

Demand:
Bulk is not only about China even though it is a key driver. In this section, we have taken a closer look at the European seaborne coal markets, which is going through some interesting times right now. European coal demand has been in a slump ever since early 2009, where seaborne demand fell by 14 million tons from the first to the second quarter. Import volumes during the last three quarters of 2011 indicated that seaborne coal demand was recovering, but the development stalled somewhat in 2012. Looking on a country basis, the nation with the biggest decline was Italy, with annual seaborne imports being roughly 8 million tons lower today than before the financial crisis. France has also decreased its imports by around 4-5 million tons annually. The United Kingdom and Spain have weakened as well, but these countries seem to be on a rebound, with volumes being slightly below pre-financial crisis levels. The Netherlands and Germany have had relatively stable import numbers since 2005.

The bulk of seaborne coal going to Europe comes from North America, Colombia and Russia. The United States and Colombia have doubled their exports to Europe, while Russia has maintained its share of the European demand. Russian coal is shipped from both Russian and Latvian ports; Colombian coal is primarily shipped from the Caribbean, while US coal is primarily shipped from the Atlantic Coast and the Mexican Gulf. The drop in European seaborne demand for coal did not affect these countries, but rather South Africa. From being the single largest coal exporter to Europe with 52.0 million tons in 2005, the country has become a footnote, with 13.6 million tons in 2011. This represents bad business for the shipping industry, since the sailing distance from Richards Bay to Rotterdam is 98% longer than from Hampton Roads and 61% longer than from Puerto Bolivar.

Although European coal imports didn’t tell a particular positive story for shipping, US exports most certainly did. We expect to publish a story on this within the next couple of weeks. 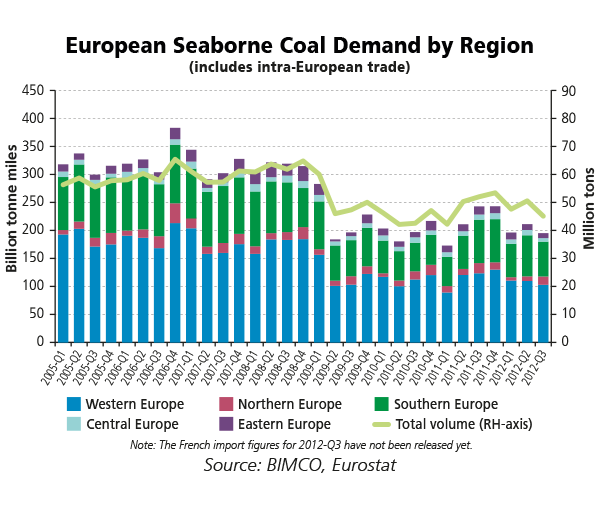 On a more general note regarding the bulk market, China is expected to increase its imports of wheat, as sub-standard storage facilities have damaged a part of the huge Chinese stockpiles. Traders said that China is seeking to increase imports when global prices are in a slump. Current forward prices indicate that this may happen during the third quarter of 2013. According to Chinese customs statistics, the main exporters of wheat to China are Australia, Canada and United States, the latter two providing significant tonne miles.

Meanwhile, Argentina is exporting record high volumes of grains; CRSL reported that Argentina exported 4.86 million tons of grains in March – the highest number ever for a single month. This gave a spike in Panamax rates with the BPI staying just below the psychological barrier of USD 10,000 per day in March and April, but earnings are now slightly lower at around USD 7,000 per day. In our last report, we predicted that Panamax rates would stay in the USD 5,000-10,000 per day territory; going forward seasonal events like Argentinian exports are likely to provide for the upside ticks. 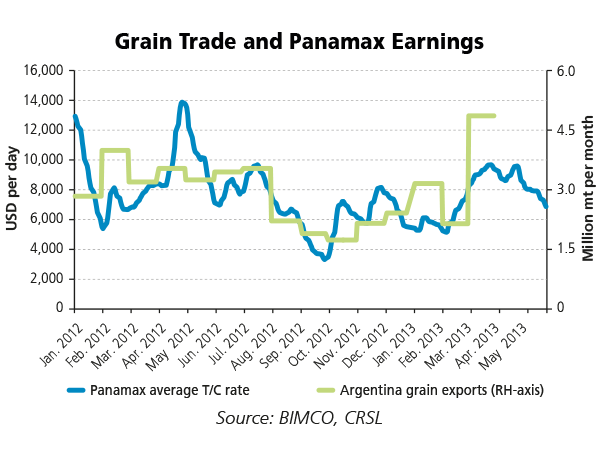 Supply:
New dry bulk deliveries walk the anticipated line and have now reached 29 million DWT. Meanwhile, 11 million DWT have been sold for recycling, which brings the year-to-date fleet growth up to 2.8%.

The inflow is seen primarily in the Panamax segment, where 136 (in 2012: 162) new vessels are keeping Panamax fleet growth high. Simultaneously, the Capesize segment only saw 48 (in 2012: 115) new vessels coming on stream, eventually easing some of the pain from the current overcapacity.

Average age and size of the demolished tonnage is 28 years and 60,000 DWT. In line with the development seen in the last couple of years, the average age is still trending down – whereas the average size is essentially unchanged. BIMCO forecasts a slightly lower level of tonnage being demolished in 2013 as compared to last year; however, it is still going to be the second-largest year on record. The solid level of demolition prices will inspire owners to consider recycling, rather than trading their old tonnage in a very volatile market without certainty of sustainable freight rates and against more energy efficient tonnage.

As regards the orderbook, it’s also moving in the right direction in spite of the recent flurry of new orders for more fuel-efficient tonnage. During the past 10 weeks the number of newbuilding orders in the book has come down from 1,599 to 1,548.

Finally, on the ordering side, strong interest in Capesizes remains evident, with 62 new orders in 2013. A total of 18 million DWT has been ordered in the year so far, with March and April seeing total new orders placed in excess of 4.5 million DWT each month. 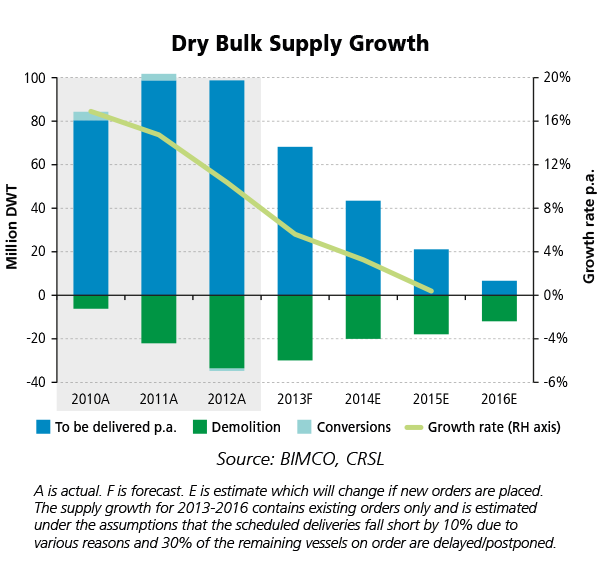 Outlook:
The Summer lull is creeping up on dry bulk shipping demand following the successful South American grain season. Fortunately, solid demand is keeping spirits up in the dry bulk industry, while the severe extent of overcapacity is pushing the date for a full-blown recovery of earnings into a somewhat distant future.

Expect the unexpected from the dry bulk market seems to be the message passed on in recent years – and today is no different, as Handysize tonnage is earning USD 10,900 per day on an Atlantic round voyage whereas Capesizes are struggling to get a 1 year T/C fixed at USD 10,500 per day if at all. With respect to freight rates for Panamax and Supramax tonnage, they have lost ground since the beginning of March

To sum up, our forecast for the coming 6 weeks: BIMCO holds the view that Capesize TC average rates are expected to remain subdued around USD 4,500-7,500 per day. Panamax is expected to stay in the USD 4,500-8,000 per day interval. For the Supramax segment, BIMCO forecasts freight rates in the USD 7,000-10,000 per day interval, whereas Handysize rates are forecast to stay at the interval of USD 6,000-8,500 per day.

Contact online
BACK TO: A soft landing in the making for the shipyard industry NEXT: Macro Economics - under pressure to deliver stronger performance