The shipping market in 2012 and looking forward

The global economy continues to grow, albeit at a slower pace than previous years. The slower economic development has been difficult for ship owners who, with a severe overhang of tonnage, have struggled with a depressed freight market since the start of the financial crisis back in 2008.

Global Economy: Things will go up from here
The global economy continues to grow, albeit at a slower pace than previous years. The slower economic development has been difficult for ship owners who, with a severe overhang of tonnage, have struggled with a depressed freight market since the start of the financial crisis back in 2008. The good news is that both GDP and world trade currently are expected to go up at 3.6% and 4.5% respectively in 2013, which may bring some relief to the shipping industry. The distribution of the global economic recovery will be a decisive factor in how the recovery is going to impact the different shipping segments.

During the second half of 2012, strong political will from the major economies introducing fiscal and monetary policies underpinned the upturn in economic development. However, many of the sustainable growth indicators remain weak, clearly reflecting the fragility in the financial markets. In China, the HSBC/ Markit Manufacturing PMI has been South of the threshold level of 50 throughout the year, indicating a slowdown. However, the November flash report gave rise to some optimism, probably spurred on by yet another economic stimulus. Meanwhile, the Eurozone continues to bear signs of a stand-still, as demand and consumer confidence remain very weak, but there are more positive signals coming from the US that expect a growth beyond 2% also next year.

BIMCO believes that 2013 will be the turning point on the macroeconomic scene. Our baseline scenario is that global GDP will grow stronger in 2013. This is founded in generally easier access to capital led by central banks, positive advocacy vis-à-vis policymakers in e.g. US, EU, Japan and China. This development is welcome and may well be the recipe to more effectively deal with the present challenges. Consumer confidence hinges on the employment situation and will be the catalyst supporting this development, creating demand for goods, housing and energy. In other words, the macroeconomic development should be a positive factor in the shipping markets in 2013, with a key risk being the fragile financial markets, fiscal consolidation in the advanced economies as well as a slowdown in some major emerging economies. 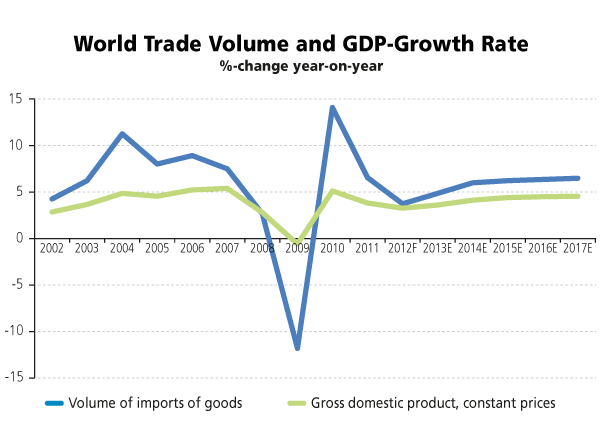 Supply: Overhang of tonnage is a major concern
The collapse of the financial markets in 2008 has taken its toll on ship owners who, in their predictions of a continued high growth in world trade back then, had ordered newbuildings at an unprecedented level. The effects of this overly-optimistic market outlook continue to haunt ship owners, who are trying their best to manage the overhang of tonnage by slow-steaming, idling and recycling. It will be some time before the fundamental supply and demand ratio is balanced. The fleet expansion during 2012 has not improved the situation, as the dry bulk fleet grew by 70 million DWT and the containership fleet by 1.1 million TEU. Fleet expansion in the tanker segments was more moderate, as the products fleet increased by a bit more than 2% and the crude oil fleet by 5%. Looking forward, BIMCO expects that the fleet will grow at a lower rate than the 2012 level. The containership fleet is expected to grow by 7%, the dry bulk fleet by 6%, the crude oil tanker fleet by 4.5% and finally, the product tanker segment is expected to have a judicious growth of 2% for 2013.

The buzzword of the newbuilding market is the so-called ECO-ships, offering potentially large fuel savings compared with the standard ship in the market. The jury is still out regarding the magnitude of the savings, but if the ships are as energy efficient as advertised by the yards, ECO-ships could be a sound business case for ship owners. The deciding factor will be fuel costs, which are not expected to decline. Many of the new ships, especially within the product tanker segment that have been contracted for since mid-2011, have been ordered with an ECO-design.

It is, however, important to emphasise that any major new influx of ships will only create further problems for the industry, considering the already heavy overhang of tonnage. The real challenge is how to optimise the energy efficiency of the current fleet, which age-wise is the youngest ever. 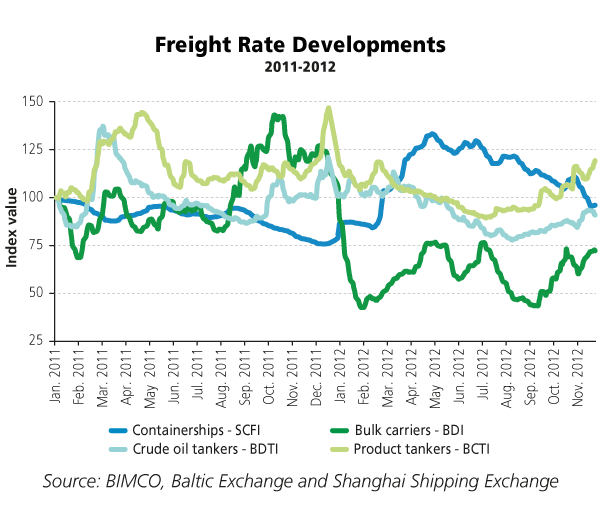 Dry Bulk: Demand is good but is it enough to save the day?
Coming into 2012, freight rates declined significantly and earnings dropped. The Capesize vessels were hurt the most, with freight rates falling below all other segments despite offering much higher cargo capacity. The dip is obviously a direct consequence of the massive overhang of tonnage, coupled with weaker demand.

Towards the end of 2012, demand for iron ore in particular picked up again, as China introduced another large stimulus package with focus on infrastructural developments. Even though this positively impacted the rates, the unsustainable low freight rate levels during most of 2012 proved only sufficient to cover operating expenses, but hardly any capital cost. Going forward, the economic development in China and India will spur demand for power generation, which will lead to increased imports of thermal coal next year. China is likely to import more iron ore in 2013, considering the infrastructure plan coupled with the falling quality of domestically mined iron ore which, all things being equal, will positively affect the demand for tonnage. The supply side is, however, likely to curb the freight rate upturn due to the significant oversupply in the Capesize and Panamax segments.

Tanker: All eyes on the US!
The world’s largest oil consumer, the US, might put downward pressure on seaborne demand in the coming years as the domestic production of oil and natural gas is expected to increase immensely, according to the International Energy Agency. Looking at imports, the extraction of oil sands in Canada means that more than a quarter of US crude oil imports come from their northern neighbour. This trend is unfortunate for the tanker shipping industry, as the large majority of these imports are transported via pipelines rather than tankers. Meanwhile, the shale gas adventures may prompt a shift in the energy mix, not only in US but also globally, towards more natural gas. The threats come on top of a weak crude tanker market, where freight rates this summer reached the lowest point since the miserable days of 2009.

In the oil product tankers sector, freight rates have been depressed throughout most of the year, with the summer months being the low point, but rate hikes during the Autumn and early Winter indicate that a slowly improving market may be in the making, potentially already next year. Things are stirring below the surface, as trade patterns are changing, with traditional importers becoming exporters, notably the US, and also in the spec-trade volumes are going higher.

Looking forward, the prospects of a big-scale North American oil and gas production may favour niche segments such as the LNG tankers outright. LNG tankers make substantial profits at the moment from the arbitrage opportunities arising from the difference in prices of natural gas across the globe. But it will take its toll on the crude and product tanker segments, unless the US significantly increases exports of these products.

Container: Is cascading the solution?
The first half of 2012 developed in the right direction for the liner trades, with rates from Far East to US West Coast rising to USD 2,600 per FEU in June, up from USD 1,800 per FEU in January. Comparably, rates on Far East to Northern Europe climbed from USD 750 per TEU in January to a peak of 1,900 per TEU in June. While the demand side was able to hold rates up in the trans-Pacific trade, rates to Northern Europe fell to touch USD 1,000 per TEU in November, as demand succumbed in the shadow of the Eurozone crisis.

Going forward, the liner segment is about to settle for lower growth rates than those that were once the norm. Globalisation is expected to continue as the main driver, but stronger intra-Asian demand rather than a speedy return to high demand from Europa and US is on the cards for the coming years.

We have seen a steady main trading lane cascading where the Far East – Europe container trade is now largely conducted by Ultra Large Container Vessels (ULCV), a fleet segment that has increased by a staggering 43% so far in 2012, with more to come in 2013. Some segments are being squeezed by the general economy of scale movement in this sector, notably the sub-3,000 TEUs that have accounted for 75% of the overall containership demolition, testifying a cascading to larger ships.

While voyage and operating expenses may just be covered at current rates, they are unfortunately insufficient to fully cover the cost of capital. In an effort to establish reasonable returns on investment, liner companies resort to deactivating routes, laying-up and demolishing tonnage extensively. Going forward, the route to and perspective of recovery will greatly depend on the container trade’s ability to balance the supply side to demand.

Contact online
BACK TO: News & Trends NEXT: Dry Bulk Shipping - last year was a good year for demand, and supply growth is falling