The average age of demolished crude oil tankers hits 21 – not much room left for demolition balancing the market!

Crude oil tanker tonnage in the size range from Aframax to VLCC is now recycled at the age of just 21, a level not seen since 1995. The poor freight market now increasingly impacts the segment of more mature tankers, effectively reducing the room for more demolition to balance the market.

Crude oil tanker tonnage in the size range from Aframax to VLCC is now recycled at the age of just 21, a level not seen since 1995. The poor freight market now increasingly impacts the segment of more mature tankers, effectively reducing the room for more demolition to balance the market. Moreover, the excessive demolition of crude oil tanker tonnage in recent years has reduced the fleet which is likely to exit the active fleet in near future for recycling to 2%.

As the earnings across the board in the tanker market have been rather poor since 2009, the average scrapping age has fallen from previous highs. During the period 2000-2005 the average age of demolished tankers was at 26 years and is now, as said, down at 21 years. 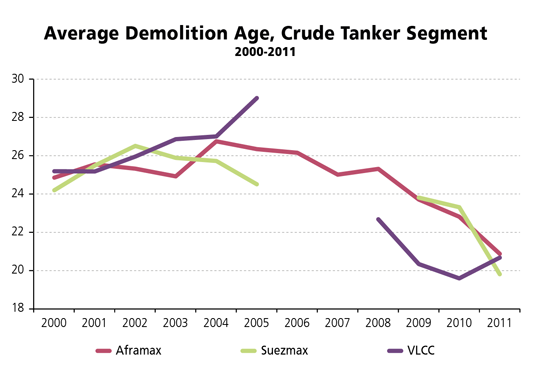 The low earnings environment over the past three years have forced ship owners to sell tankers for recycling 4-5 years earlier than they did previously. This has cut deep into the expected commercial lifetime of a tanker. The shorter economic life of the assets is adding to the challenges presented by the low freight rates. Owners are now facing steeper and higher annual paybacks on loans and heavier depreciations weighing in on the Profit/Loss statements. This will go on until markets normalize with a better balance between demand and supply.

Following a stable slowly uprising trend in the years 2000-2005 where the recycling age increased steadily, the continued strong freight markets in 2006, 2007 and first half of 2008 were characterized by very limited recycling of tanker tonnage. As the crisis arrived in late 2008, the fundamental balance between supply and demand tipped into heavy oversupply of capacity. As ship owners attempted to cut losses and to rebalance the market for crude oil tankers, the tanker tonnage sold for demolition got younger.

Matters to consider before trading on
When markets are challenging the decision to take your vessel through the third special survey, at the age of 15, it must be given very careful thought. What is the future trading prospect for the vessel? Will the investment result in the desired economic return?

The VLCC market has moved from one “two-tier” market to another. Previously it was all about single hull vs. double hull. Today it is all about modern fuel efficient tonnage vs. mature excessive fuel consuming tonnage. This is giving the latter a commercial disadvantage when competing for cargoes against the former. A difference in fuel consumption can easily amount to USD 10,000 per day on the fuel bill alone.

Assuming the commercial life of a VLCC is 20 years, the owner has five years (from the age of 15 to the age of 20) to recover the expenses occurring from steel replacements, dry docking, lost hire etc. from the third special survey amounting to USD 3-5 mill. This will put USD 4,800 per day (estimating 250 earning days and 8% interest) on top your OPEX at USD 10,000 per day.

As the required earnings are moving up, it’s vital to acknowledge the discount to modern tonnage that vintage tonnage is also likely to suffer. These extra costs may prompt the decision to sell or demolish as it also frees up capital that may better used in another way.

Annual average earnings on modern tonnage since 2009 have been USD 29,300 per day (source: CRSL), for mature tonnage you should expect a serious discount. When applying a 20% discount to that you end up earning an estimate of USD 23,400 per day – which is basically your break-even level when you take OPEX, special survey costs and the extra fuel bill into account.

Recycling potential in capacity
For the VLCC’s the downward age-trend was reversed in 2011 after very deep cuts in capacity. In volume terms, demolition of  crude oil tankers had gone beyond the demolition potential in our “high-stress” scenario D (see below), where “too young” tankers left the fleet more than three years earlier than the past 12 years’ average age (which is 24 years). In 2010 the average demolition age fell to 19.6 years; this was the lowest in 19 years (since 1992). An important driver behind the high demolished volumes and lowering of age up to 2011, besides bad markets, was the phase-out of single hull tonnage.

“BIMCO considers the remaining demolition potential in the VLCC segment to be relatively small on the back of that. This is supported by the low number of vessels leaving the fleet during the hardship in 2011. As well as the low number which have been sold for demolition so far in 2012” adds Peter Sand.

The youngest VLCC that has been recycled during the current crisis was the M.T. Orion Trader, at 260,000 DWT, built in 1997 – sold for demolition in December 2011, at just 14 years of age. The vessel is likely to have experienced several operational deficiencies during trading, prompting the early demolition. Put into the context of the horrific tanker market in first half of the 80’s, VLCCs were sold for demolition at average ages of 11 to 12 years.

Meanwhile the recent demolition pace in the Aframax segment can be described as being in “high-stress” scenario (D) and the pace in the Suezmax segment as being in the “low-stress” scenario (C). This is leaving little, but relatively more room, for demolition to have an offsetting effect on oversupply, since the Aframax and Suezmax fleets have not been cut so deeply yet as the VLCC fleet.
The graph below illustrates the demolition potential for crude oil tankers and shows that the major part of the potential is held by the smaller crude carriers below the Aframax size. 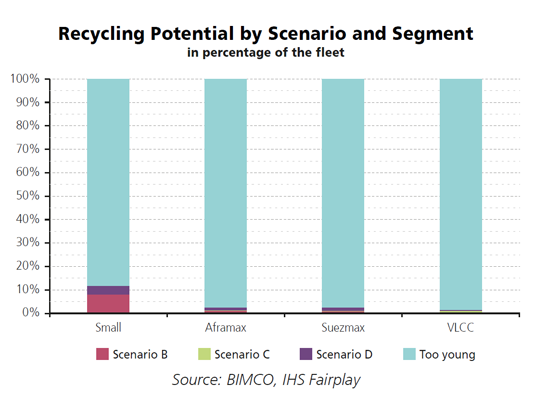 The table below illustrates that what has been going on in the past three years (scenario A) represents a fleet-wide situation which is beyond the “high-stress” scenario represented by D. However, as the percentage of the total crude oil tanker fleet that is estimated to exit the fleet is only around 2%, BIMCO concludes that the extensive demolition of obsolete tanker tonnage in recent years has exhausted most of the rebalancing potential for the supply/demand situation that could otherwise benefit the markets going forward.

Outlook
There is of course more to the estimation of the demolition potential than the simple age of a vessel. Despite any shortcomings on that regard, the age “method” is a tangible, fleet wide and commercially intuitive approach.

For the sake of painting the larger picture, some other factors are relevant to consider. First and foremost, and according to VesselsValue, the current fleet holds 608 VLCCs. In the order book today, an additional 113 VLCCs are waiting to be built and delivered in future.

The number of active VLCCs built in 1997 and before is 88 – this is a relevant figure, as they have special surveys coming up this year and coming years. A special survey may require a substantial amount of steel to be replaced and a potential bill of USD 3-5 million to be settled to secure on-going trading. Is this expense worthwhile to account for in the current market? The answer is likely to be no when looking at the market prospects.

The alternative to on-going trading and a second hand sale is a sale for demolition. According to VesselsValue, the second hand value of nearly all VLCCs built in 1995 or prior to that is now below demolition value as estimated at 476 USD/ltd on the Indian Subcontinent.

These are all factors to keep in mind when making decisions about the future of the vessel.