Overall demand for container shipping is not as bad as one might think from looking at the freight rates. But for an industry that has grown by close to 10% p.a. over the past decade, it does take time to adjust and adjust to a demand growth half as strong.

Demand:
Overall demand for container shipping is not as bad as one might think from looking at the freight rates. But for an industry that has grown by close to 10% p.a. over the past decade, it does take time to adjust and adjust to a demand growth half as strong. Its strong dependency on confident consumers makes higher global growth an imperative for escaping the present state, unless significant idling of tonnage sets in. The recent economic outlook from OECD calling for urgent political action to boost global economy reveals that the strong growth from the happy pre-2008 days is unlikely to return anytime soon. Judging by the outlook for world trade in volumes, as forecast by the IMF, we are heading into a new level of growth. Coming from 8-9% of growth before the current crisis, IMF foresee a post-crisis level of world trade around 5-6%. This represents a huge change to the demand situation that is destined to affect container shipping.

In a short-term perspective and as a counter measure, we apply significant focus on the idling of ships – for many good reasons – but the significant other key element on the demand side, inventory investments, deserves due focus as well and especially in these turbulent times. The background is that in the US as well as in Europe, restocking of drawn-down inventories contributed significantly to the positive demand story of late-2009 and first three quarters of 2010.

In respect of the US, inventory changes during the 2nd and 3rd quarter of 2011 have been negative. Just like 4th quarter of 2010. When looking at loaded inbound containers arriving at the US West Coast, the correlation is obvious. BIMCO forecast 2 months ago that growth in US West Coast inbound containers could be negative in 2011. At that time, y-o-y growth for the first 8 months stood at 1.5%. The latest data for the first 10 months of the year shows no growth (using the ports of Los Angeles and Long Beach as proxy). The spot freight rate for containers from Shanghai to the US West Coast has dropped by 27% as compared to end-November last year. 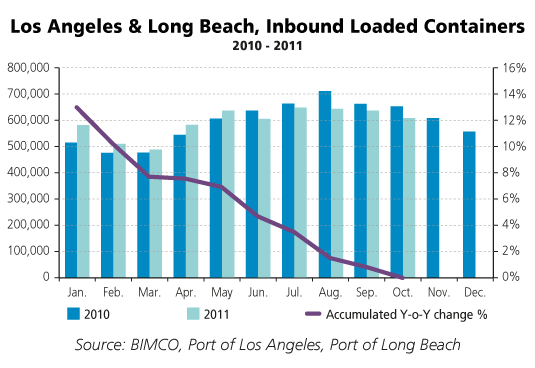 On Far East to Europe, the growth is positive and expected to stay in positive territory throughout the year. It is currently at 4.1% for the first 9 months of 2011 but expected to end the year somewhat lower. The spot freight rates for containers from Shanghai to Europe have dropped by 64% as compared to end-November last year. During the past three months, freight rates have slipped from USD 821 per TEU to USD 500 per TEU.

The opposite scenario is seen on the intra-Asian routes, where spot freight rates over the past year have increased significantly. Amongst the top achievers are Shanghai-Pusan which is up by 32% y-o-y and Shanghai-Hong Kong which is up by 21%. Most of the positive rate increases happened in the 1st half of 2011. Since then, rates have mostly been moving sideways, with a tendency to go South. 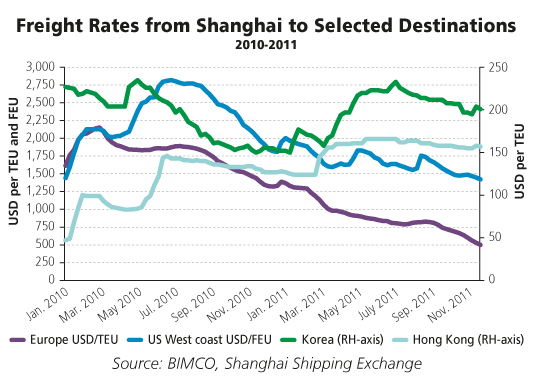 Supply:
Over recent months we have seen a wave of delivery postponements and cancellations coming to the surface of the orderbook. It is clear that the liner companies, facing eroding rate levels, are resorting to this option as the most effective tool to balance the supply side. They are clearly using this option as resolutely as they did in late 2009 and early 2010.

As real postponements only exist if the construction of the vessel has not been initiated, so 2012 is unquestionably the year, where the result of the owner vs. yard negotiations will be visible. As much as 178,000 TEU have been postponed between one and three years into the future.

The demolition potential is poor when the fleet is as young as the containership fleet. This we have stated before and we still don’t believe in any upside stemming from that part of the supply side. Only 38 vessels of a combined capacity of 48,330 TEU have been scrapped during 2011, representing 0.3% of the fleet. Average age remains 30 years and average size is 1,272 TEU. This is making zero impact on the market whatsoever.

Nearly half of all new built vessels delivered during 2011 have a capacity of +10,000 TEU. The scheduled deliveries for 2012 are similarly biased towards larger ships to be deployed in the Far East-Europe trading lane. The impact of this phenomenon is very clearly reflected in the rate levels. The cascading that takes place to make room for these super-efficient megaships is putting the rest of the market under pressure too, as demand hesitates to provide the much needed market support.

The fleet has grown by 7.3% so far in 2011 and is expected to grow by 8% on the full year. We anticipate that November and December will be no exception to this trend. January, on the other hand, is very likely to see substantial deliveries as the postponements run out. 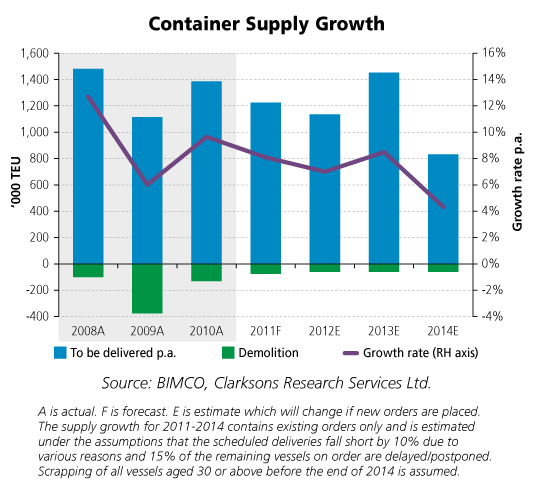 New contracts have unfortunately now exceeded the BIMCO forecast of 1.6 million TEU. So far, 1.776 million TEU have been ordered primarily for 2013 delivery.

Outlook:
As we scout for idling of vessels to an extent that is able to shift the balance in the market, looking into the near future doesn’t bring us much comfort, although some good signs have been detected. From the current level of 0.5 million TEU, BIMCO assesses that we have to look beyond the “Spring Festival” on 23 January 2012, (aka Chinese Lunar New Year) before any significant rise could materialise. But liner companies defending market share is a major factor and has always been.

Another positive trigger to lift the markets would be if the Wal-Mart’s of this world resumed inventory building, and consumer confidence is a critical factor here.

An analysis from an external source has shown that the inverse relationship between idling of vessels and industry EBITDA has been very strong since the end of 2008. Towards the end of 2008, industry EBITDA turned negative and within the following quarter the amount of idled capacity doubled from 600,000 TEU to 1.2 million TEU. As industry EBITDA moved into positive territory again in the beginning of 2010, idled capacity was promptly reactivated, taking the amount of idle capacity from 1.4 million TEU to just 200,000 TEU within seven months.

The endurance race amongst operators on the Far East-Europe lane will continue. So far rates have dug as deep as USD 490 per TEU under the weight of overcapacity and slow demand. Industry EBITDA is now negative and we have seen a significant and very positive rise in idle capacity starting toward the end of third quarter. By early December, capacity equal to 526,000 TEU or 3.4% of total fleet is reportedly idling. The numbers are moving up alright, but still a far cry from the 1.5 million TEU that was recorded to be idled by the end of 2009. The non-operating owners are as expected to maintain the lion’s share of the idle fleet, where approximately two thirds are vessels without a charter party attached.

For comparison, the amount of newly delivered tonnage into the active fleet in the second quarter of 2011 was 477.440 TEU. This amount puts into perspective the fact that current layups basically only remove 3 months’ newbuilt tonnage from the market balance equation. This is hardly sufficient to make any difference to the fundamental market balance – as is also proven by looking at the freight rates.

The average BAF-ratio (% of the change in bunker costs that are transferred to the customers) declined to 80% from 86% in the first 9 months. The pressure on freight rates makes it much more difficult to pass higher bunker costs on to customers.