In absolute numbers, 2011 is going to be the new Number 1 in terms of the greatest amount ever of dry bulk tonnage leaving the fleet to be recycled. We are on course for more than 20 million DWT to be demolished, with the potential of reaching 25 million if owners continue to be attracted by the relatively high demolition rates and freight rates fail to improve significantly through the remainder of the year.

In absolute numbers, 2011 is going to be the new Number 1 in terms of the greatest amount ever of dry bulk tonnage leaving the fleet to be recycled. We are on course for more than 20 million DWT to be demolished, with the potential of reaching 25 million if owners continue to be attracted by the relatively high demolition rates and freight rates fail to improve significantly through the remainder of the year.


Chief Shipping analyst at BIMCO, Peter Sand, says: “The huge amount of tonnage leaving the fleet for recycling is very positive news for the dry bulk market.  As 2011 is going to provide the largest inflow of new ships ever, this counterbalancing effort by ship owners is softening the current imbalance between supply and demand as fleet growth will be tempered”.

The primary driver behind this development is the fact that earnings have been close to OPEX-levels for most of the year. Combined with a strong inflow of new tonnage this has led to a strong surge in demolitions of older tonnage. 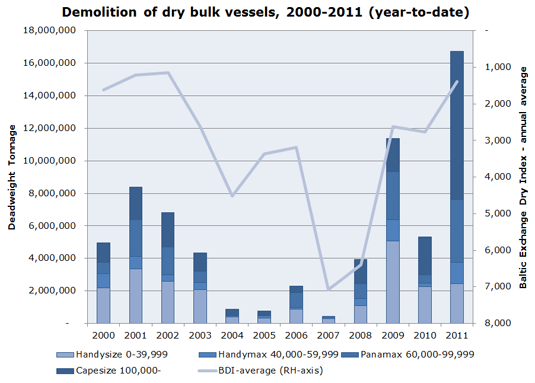 If the full potential of demolition of the Capesize fleet in 2011 should materialise, that would equal another 4.6 million DWT to be demolished. In order words it would require the 28 remaining Capesize vessels that are built in 1985 or before to exit the fleet.

The demolition activity has primarily involved Capesize vessels. 55% of the recycled DWT in 2011 represented Capesize vessels. This compares to the previous 10 years average at just 27% of total dry bulk demolition. As the Capesize segment has already seen inflow of new tonnage in excess of 27 million DWT (153 vessels), the decision to take a vessel out of the commercial service is helping to cushion the impact from significant oversupply which has already left deep scars in  terms of very poor earnings. Average spot earnings for a 10 years old Capesize vessel in 2011 have been just USD 8,296 per day. This is the poorest result on record. Last year such a vessel earned USD 30,587 per day on average.

This means that, if you have so far  traded your Capesize vessel exclusively in the spot market during 2011, earnings would have covered only daily running costs, regardless of the composition of your Capesize fleet (new/old, debt-free/indebted). This may be one of the most important factors behind the booming demolition activity as massive inflow of new tonnage doesn’t encourage higher demolition activity alone.

Daily running cost on a Capesize vessel today is around USD 8,000 per day excluding capital costs and depreciations. If you include the above-mentioned costs in the earnings equation the picture looks quite different and it really spells out the challenges facing owners. If your new built and externally financed Capesize is bought at top dollar at the peak of the market (USD 95 million) using 80% debt at 5% p.a. you will need just above USD 30,000 per day to break-even with the vessel on a standalone basis. At the other end of the scale the same calculation equals a break-even rate at USD 19,000 per day if you invest in a 5 year old second hand vessel today at USD 39 million.

A high price and a strong flow
Owners of V Europe have just sold the vessel for USD 10 million to be demolished at a Bangladeshi facility. The vessel that was beached on August 30 is amongst the latest in a very steady stream of dry bulkers to be withdrawn from service. The 1982-built, 139,496 DWT vessel is the 58th in the line of Capesize bulk carriers, underscoring the strong flow of vessels satisfying a very solid demand for scrap metal in the demolition country.

The healthy demand for scrap steel is visible from the high ldt-prices offered. V Europe went to the breakers for USD 525 per ldt (Light Displacement Tonnage), building further on the continual rise in prices offered by cash buyers.

There are four major ship recycling markets, namely India, Bangladesh, China and Pakistan. In all terms, India is by far the largest ship breaking nation and Alang the leading facility. So far this year, 283 vessels with a cargo capacity of 8.9 million DWT have been scrapped by Indian breakers. Bangladesh comes in second in terms of DWT - 7.4 million and China in terms of numbers – 107 vessels of various kinds.

“At the current demolition pace, 4.7% of the dry bulk fleet will be demolished during 2011.  But as the order book still holds 235 million DWT in prospect for future delivery equal to 40% of current active fleet, recycling of over-aged tonnage must remain at high volume to bring optimism back and steer this dry bulk segment  towards more sustainable freight levels – and thus better earnings", adds Peter Sand.

Contact online
BACK TO: Libya getting back into tanker business NEXT: Dry Bulk Shipping - Positive development set to stay around in Q4, despite fundamental challenges.