Container Shipping - As consumer demand remains weak, a potentially very poor peak season is about to dawn on this haunted sector

The extraordinarily challenging conditions in the container shipping market are now clear and present to all. The overcapacity on the main trading lanes has prompted cascading to a larger extent than a normal market development would do, adding pressure on secondary routes.
Listen to podcast of this article

Demand:
The extraordinarily challenging conditions in the container shipping market are now clear and present to all. The overcapacity on the main trading lanes has prompted cascading to a larger extent than a normal market development would do, adding pressure on secondary routes. The main trading lanes have always been a matter of utilising economies of scale but now more than ever – if you trust the deployment of the active fleet as well as placed new orders.

Following 29 weeks of sliding rates, the spot freight rate on the route from Shanghai – Europe have improved two weeks in a row, after doing a touch ‘n’ go on USD 800 per TEU in the 3rd week of July. On 12 August rates were quoted at USD 828 per TEU, a clearly unsustainable rate level for all carriers.

Peak-season surcharges have been delayed to a large extend this year – and they are not likely to be implemented at all. General Rate Increases beyond the Bunker Adjustment Factor have not really been successfully implemented since early 2010. Meanwhile, shippers are keeping their eyes on the spot prices in comparison with volume-deals and they like what they see right now – low prices and available slots everywhere even as the peak-season is rolling.

Global container traffic is forecast by Drewry to increase by 8.1% in 2011. But that figure may cover up some large differences between the trading lanes and finally prove to be too bullish. Data on front-haul volumes on Far East to Europe for Jan-May period show only 6.0% growth, while the trans-Pacific front-haul during the January-April period proved very solid at 9.8% in volume growth. But a lot of early 2011-positives have turned sour over the Summer and US imports could prove to be quite a disappointment in Q3 as well as in Q4. Should the disappointments stay put, sliding rates will be back following a potential rate plateau during the peak season.

Carriers bracing for the impact of low revenue focus to an increasing extent on operational efficiency including slow steaming to level off some of the burden from higher and higher bunker prices, now at USD 645 per tons in Singapore, up some USD 200 per tons from the start of the year. 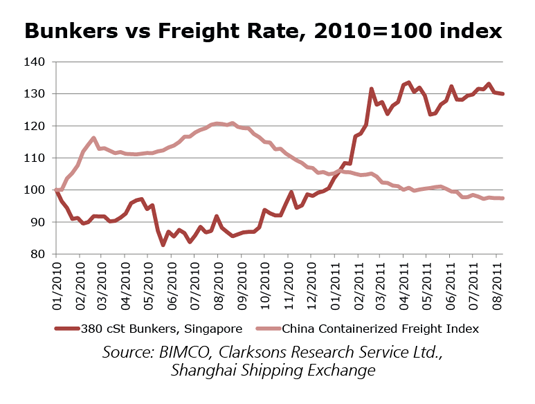 Supply:
Since our last report two months ago, the signing of newbuilding contracts has been red hot. No less than 45 vessels with an average capacity of 11,000 TEU (0.5 million TEU in total) have been inked. 2/3 of these vessels are heading for the Far East – Europe trade – most of them in 2013. So if you were looking forward to a breather in the massive tonnage inflow on the trading lane – you can now start singing the blues. Moreover ships for delivery in 2015 and 2016 are now surfacing in the orderbook. A unique feature for the container shipping industry as the tanker orderbook holds no ships for delivery beyond 2014 and just three bulkers are scheduled for 2015-delivery.

The total containership orderbook has swelled to 4,475,642 TEU – up by 9.3% in just two months. Despite deliveries of vessels with a capacity of 1.2 million TEU over the past year, the heavy ordering has resisted the orderbook from decline; instead it has been on a steady rise for exactly a year now. Year-to-date new contracts amount to 1,410,719 TEU, en route to surpass the BIMCO forecast of 1.6 million made half a year ago – in anticipation of a less active new build market influenced by the poor earnings prospects for the year. 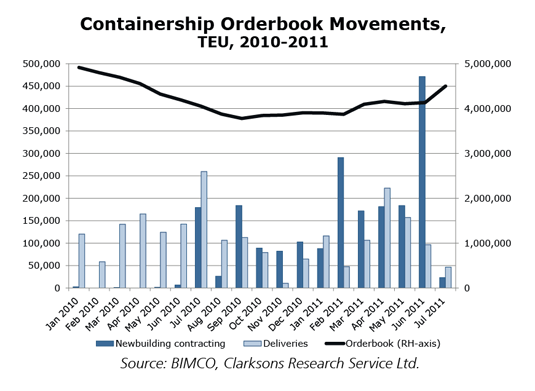 This strong activity has naturally impacted our supply outlook illustration, as 2013 now holds 1.333 million TEU in prospect for 2013-delivery, up by 16% the same growth rate in 2013-deliveries as the previous two months. Without any doubt, owners have come back with a vengeance from the ordering vacuum in 2009 and first half of 2010.

The tally for deliveries in the +10,000 TEU has now reached 31 vessels, as the first half of the year was the heavy end with more than 4 Ultra Large Containerships launched every month. The pace for the rest of the year is more likely to be halved. 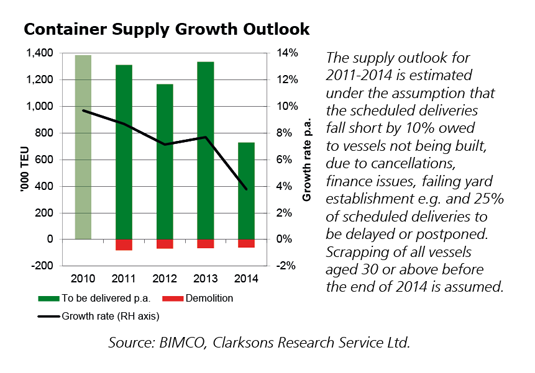 BIMCO forecasts inflow of new container tonnage in 2011 to be at 1.3 million TEU. This is in line with a steam off during the second half of 2011. As the young fleet holds no demolition potential, the fleet is forecast to grow by 8.7% in 2011 – equal to and outweighing demand growth by close to 2%-point.

Outlook:
As the peak season is upon us, the increasing freight rates on the Far East - Europe trading lane is a very positive sign. With spot rates now at USD 828 per TEU, the forward curve is trading in a steep contango towards the September peak just shy of USD 1,000 per TEU. Following the anticipated September peak the forward curve slides down to USD 950 per TEU in Q4. Should the forward curve “prediction” come true, a situation that BIMCO finds likely, the peak season will be amongst the poorest performing ever, adding further pressure on the container shipping industry.

In this extended low freight rate environment, increased focus is placed on spot rates as carriers hesitate to engage in long-term volume deals at fixed rates, as they hope for better days around the next corner. But as a lot of chartered-out vessels are being returned to owners during these months, the recent sidestepping in the charter market may take a turn due south as the demand picture remains soft.

Expectations of a strong third quarter on the trans-Pacific trade lane have evaporated completely, in line with the last BIMCO SMO&O where we argued that the forward curve could prove to be too optimistic. Now at USD 1,800 per FEU for the coming year, the forward curve is still in contango at 15% above spot price, but the general price level and future price hikes have both come down, leaving a more credible outlook for FFAs. In hindsight, selling the FFA Q3-2011 in early June at USD 2,100 proved to be a good deal, if you were able to find a willing buyer.

As shipping in general – and container shipping in particular – ultimately depends on consumer demand for goods, it is of paramount importance to overcome the ongoing unrest on the financial markets and the prolonged low GDP growth and weak job creation. Not until then can consumer confidence be restored, and a new normal and solid demand worldwide be established.

Globally-integrated international supply chains have developed to provide efficiencies of scale, but have also increased the interdependencies between economies in good times and bad, which is hurting container shipping big time right now. 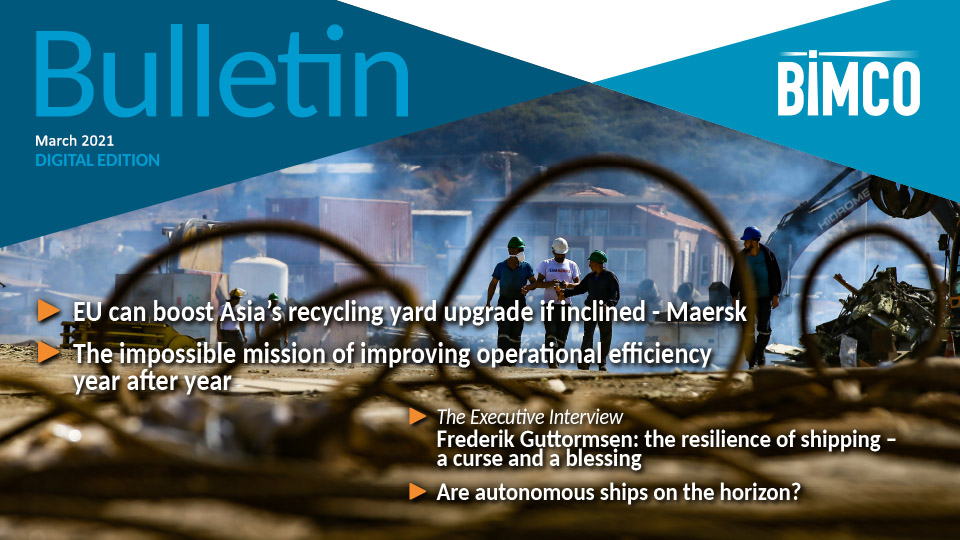