Container Shipping - Growing volumes but even stronger growth in tonnage

Container rates have been sliding on all the major trading lanes since July 2010, with the exception of a small hiccough round the turn of the year
Listen to podcast of article

Demand:
Container rates have been sliding on all the major trading lanes since July 2010, with the exception of a small hiccough round the turn of the year, as liner companies tried to push for implementation of general rates increases in a weakening market. The anticipated strong volume rebound following the Chinese Lunar New Year did not materialise, and that resulted in continued descending rates on most trading lanes. Looking at transport data from the ports of LA and Long Beach as representative for the trans-Pacific trade and data from ELAA focusing on Asia-Europe, demand appears to be solid.

Towards the end of March, spot freight rates on the Shanghai-Europe trades dropped below USD 1,000 per TEU for the first time since March 2009. Lower volumes than expected for too many ships have triggered fierce competition – sending rates down rapidly. But a stabilization of freight rates may be just around the corner as the rate development was flat on 1 April bringing weekly cuts since 1 January to a halt. But any significant rebound to last year’s level is not expected to happen. As compared to last year, rates are 48% lower.

The total inbound containers handled by the ports of Los Angeles and Long Beach grew by 16% y-o-y in January and 9% in February. The corresponding figures from ELAA on the Asia-Europe trades display a solid flow of containers bound for Europe in January with a growth rate of 16% as compared to the same period last year (y-o-y). 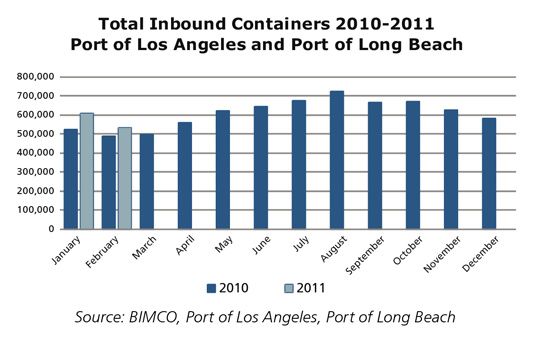 On the trans-Pacific trade, lane spot rates rose by 1.4% to USD 1,631 per FEU, this is 20% lower as compared to the same period last year. Whether this vital corner-turn and increase is an indication of rates bottoming out cannot be said with certainty.

An indicator for trans-Pacific container demand is US consumer confidence, as economic confidence is likely to impact spending. The index saw a sharp decline in March – signalling that the US economic situation is still not firmly back on track. While the present index rose slightly, the near future expectation index fell significantly. The Index now stands at 63.4 (1985=100), down from 72.0 in February. 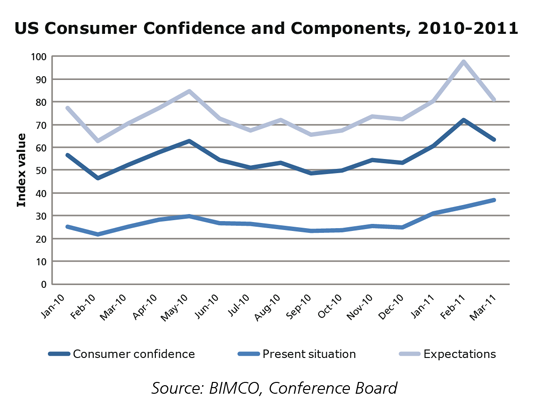 Supply:
Oversupply in the main routes is the reason behind the weak freight rates. The idle fleet of container ships now stands at 84 vessels, with a total cargo capacity of just 185,000 TEUs, the lowest level since November 2008. At the peak in January 2010, 1.5 million TEUs were idle.

The combination of 136 new build vessels with an average cargo capacity of 6,357 TEUs delivered since July 2010 adding to some 150,000 TEUs that have been re-activated – the active fleet has grown by 1 million TEUs in the past 9 months. The potential of slow steaming has been almost fully utilised. This leaves only little upside left for carriers to deploy that tool to a larger extent in the search for a better balance between demand and supply.

As the orderbook-to-fleet ratio has gone back to a “normal” level, new contracts are being signed at increasing pace. Container ships represent the most in-demand ship type at the yards in 2011. During April, the total 2011 newbuilding contracts are set to top the total 2010 newbuilding contract level of 655,000 TEUs. So far, contracts for ships with a total capacity of 485,000 TEUs have been inked in 2011.

Two-thirds of the total contracts for new buildings placed since 1 January are to be delivered in 2013. Expected inflow of new tonnage in 2013 has risen significantly since the last update two months ago, hiking expected supply to almost 1 million TEUs from the previous level of 700,000 TEUs.

The most significant event was without doubt the long awaited order placed by Maersk at Daewoo in February. The order could end up being the largest order ever if the options are called, seen in the light that the order includes 10+10+10 Ultra large container ships with a cargo capacity of at least 18,330 TEUs each. Not surprisingly, these ships are set to deliver unit costs 26% lower than average on the Asia-Europe trade once delivered in 2013-2014. Perhaps spurred by that move, other carriers have clearly seen this economy of scale scenario and have initiated upgrading of ships on order. 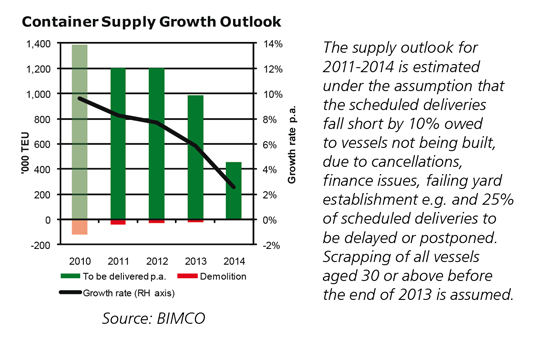 Outlook:
Severe overcapacity is poison to any freight market, as freight rates continue to decline even though volumes are growing fast but not enough. Cascading remains a part of the game. It gives little comfort that freight rates on minor trades e.g. on intra-Asian routes have recently gone up by 10-20%.

On the supply side, 10 ships of +10,000 TEUs vessels have been delivered into the Asia-Europe trade during 2011. Taking slippage into account, BIMCO foresees another 34 ULCS’s could be launched during 2011.

BIMCO expects that we might go all the way into the peak-season around the third quarter before sustainable spot rate levels are back on main trading lanes from Asia to Europe and US West Coast.

To restore freight rates significantly over the coming quarter, idling of vessels ought to be considered an option. That is, however, not expected to happen and that could jeopardize peak-season earnings even if solid consumer confidence is restored and the high unemployment figures start to come down.

European and US consumers still hesitate to go on buying sprees at the mall, but such behaviour would push demand upwards. Without consumer confidence and increased spending, the recovery will stay fragile. Latest data from the Conference Board on US consumer confidence tells a story of rising inflation and souring income expectations, which in tandem with downbeat confidence in the labour market, represents a rather bleak outlook for the near future.

Contact online
BACK TO: Tanker Shipping - Unusually disruptive times combined with a stream of new tonnage in all segments NEXT: Perspectives on future dry bulk trends