In a year that is bound to be challenging for tankers, increasing focus will be on the different disruptions affecting the market and bringing about rate spikes
Listen to podcast of article

Demand:
In a year that is bound to be challenging for tankers, increasing focus will be on the different disruptions affecting the market and bringing about rate spikes to provide for overall decent average earnings. However, sometimes the disruption also brings about a drop in demand. Within the last two months, the tanker markets have been riding exactly that rollercoaster of demand variations. As disruptions to normal trading are “the new norm”, tanker shipping owners and operators are trying to make the best of it. We are particularly thinking of disruptions such as the ongoing unrest in North Africa potentially spreading to other areas, pirates in the Indian Ocean taking VLCC’s close to the Strait of Hormuz or the earthquake/tsunami in Japan; events that add extra tonnes-miles demand to one trade one day, only to subtract demand in another market the next day, such as Aframax tankers making last-minute calls in Libya before trading became too difficult. Freight rates went sharply up as Libyan sweet crude oil is high quality and thus in strong demand. The situation in Japan is making discharge as planned merely impossible, with extended waiting times causing congestion around many ports. Please see the operational and security-related advice to commercial activity in the affected areas on www.bimco.org.

Also, a strong Winter in northern Europe has impacted shipping. In the Gulf of Finland and the Bay of St. Petersburg, 20-75 cm thick ice reminds shipping that Winter is not over yet and navigation in local shipping routes remains affected. In some areas, this requires the use of Ice Class 1A for ships entering the ports of the Baltic Sea coastal states. Currently, more than 120 ships are stuck in the heavy ice in the Gulf of Finland and Gulf of St. Petersburg. Many of the ships are about to call St. Petersburg. Conditions like this provide reasons for charterers to pay ice premiums to get their trading done. Depending on the weather and wind the area could be close to ice-free by the second-half of April.

CRUDE -
While overall VLCC single voyages from the Arabian Gulf to eastern destinations have earned around USD 30,000 per day on average in the first quarter, the benchmark route TD3 from Ras Tanura – Chiba has been struggling with a too long tonnage list and an earthquake, leaving the upper hand to the charterers for most of the year so far. Only a few minor spikes have spiced up the oversupplied VLCC trade. Average earning in 2011 on TD3 has been USD 19,000 per day, not enough to break even for heavily indebted VLCC’s, but enough to cover daily running costs (OPEX) of around USD 10,000 per day.

PRODUCT –
Product tankers in the eastern markets continue to do business at poor rates. While the disastrous events in Japan prompted a slowdown in fixing activity, the return of business has failed to hike rates despite obvious demand potential to fill the gap from outages at refineries. But very high oil inventories and a parallel drop in oil product exports, combined with too much tonnage being open for business, have developed into a flat freight rate environment.

Meanwhile, in the western markets product tankers have done well during most of March. Large draws on gasoline stocks in the US combined with rising prices opened the trans-Atlantic arbitrage – pleasing many European refineries seeking alternative costumers to the business normally done into Japan.

The natural disasters in Japan closed a quarter of all petrochemical plants that buy European naphtha. European refiners found themselves in need of finding interim alternative markets while these plants are closed. One way of dealing with the surplus of naphtha is to blend it into gasoline and then ship it to the US. Helped by the opening of the gasoline arbitrage due to rising prices in the US and falling stocks, increased demand for tonnage has occurred in the Atlantic Basin. At the same time, US export of distillates has increased recently and has gained importance overall in the Basin as US gasoline imports have slowed. Owners find this an improvement to their options of getting triangulation going rather than doing a ballast return to TC2.

The sudden stronger demand improved conditions for clean product tankers. As it appeared, oversupply was less severe than expected, as several product tankers had traded dirty products recently due to the higher earnings in those trades and were thus unable to take clean cargoes immediately.

BIMCO forecasts an inflow of new product tankers in 2011 to be just above 7 million DWT. As demolition is expected to settle at 2 million DWT the fleet is forecast to grow by 5.0% in 2011.

As for the total crude oil tanker segment, 33 million DWT is expected to be delivered, making the fleet grow by 9%. Out of which 15 VLCC’s have already been delivered in 2011, adding 4.6 million DWT (+2.8%) to the fleet of supertankers. BIMCO projects that as much as 66 VLCCs are about to enter the active fleet in 2011, an estimate that does take slippage into account. Aspects on the whereabouts and prospects of the remaining non doubled-hull fleet which avoided the 2010-phase-out will be addressed in the next SMO&O. 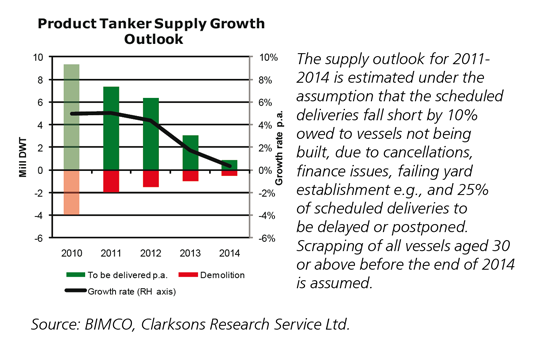 As regards demolition, the high Ldt-prices (USD 500/Ltd) offered by the breakers yards seem to attract a greater than expected number of vessels ready for demolition, with Indian breakers offering the highest prices and thereby taking the lion’s share of the business. Pakistani breakers continue business as usual, but are offering prices a bit below Indian competitors, causing them to miss out on the best deals. After more than six months out of business, the Bangladeshi breakers are expected back soon to resume activity following a positive outcome of the pending High Court ruling. BIMCO expects a total of 4 million DWT of tanker tonnage to be sent to the breakers this year, but as the current toll is already at 1.8 million DWT (out of which 0.4 million DWT of product tonnage), some support to the freight markets could be the benefit of this if the current pace is maintained.

Outlook:
The events in both Libya and Japan represent a continuing thread of uncertainty, but there is a clear contrast between the two countries’ different roles in the global energy system and tanker shipping markets. Libya is a supply story whereas Japan is mainly about demand. Libya’s importance to world oil markets derives from its role as producer of oil and oil products (1.8 million barrels per day in 2010). Libya is an exporter of high quality sweet crude oil, mostly to Europe, while Japan is a large consumer of crude oil and refined products.

The situation in both Libya and Japan will continue to be difficult for some time. It is, however, likely that once things settle down Japan is in for higher demand for crude oil as a substitute for nuclear power and as an extra energy source as reconstruction gets underway.

High inventories remain an important factor in the seasonally weak Q2, but as recent developments have proved so clearly as mentioned in the introduction, fundamental conditions may be completely irrelevant when disruptions make their impact, whether they are caused by factors in the political or social arena, crashing financial markets or Mother Nature acting up. Just take a look at the oil price – demand is low and supply is high, not exactly a cocktail that should give us the highest Brent oil prices in 30 months and among the highest ever.

BIMCO expects that freight rates in both crude and product tanker segments will remain under pressure in the coming months. The exception to this overall assessment is the Atlantic clean market that could be in for ongoing firm rates lasting several weeks.

Contact online
BACK TO: Dry Bulk Shipping - Excess capacity limits gains in a market with healthy demand NEXT: Container Shipping - Growing volumes but even stronger growth in tonnage