Listen to podcast of article

Global economy:
Global recovery advances but remains uneven, with two main tracks. In advanced economies, activity has tempered less than expected, but growth remains subdued, unemployment is still high, and renewed stresses in the Euro area periphery are contributing to downside risks. In many emerging economies, activity remains buoyant, inflation pressures are emerging, and there are now some signs of overheating, driven in part by strong capital inflows, according to the International Monetary Fund (IMF).

At the end of January the IMF updated its forecast for global output in 2011 by one quarter of a percentage point to 4.5%. This reflects stronger than expected activity in the second half of 2010 as well as new policy initiatives in the United States that will boost activity this year. But downside risks to the recovery remain elevated. The most urgent requirements for robust recovery are comprehensive and rapid actions to overcome sovereign and financial troubles in the Euro area, policies to redress fiscal imbalances as well as to repair and reform financial systems in advanced economies more generally.

High commodity prices are also a downside risk to the overall global recovery. Oil, coal and grains are amongst the commodities that put a lid on economic growth and create inflationary pressure. The already high and still rising oil prices could limit growth, in particular in the emerging markets, where reliance on oil and consumption is growing the most. On 31 January, Brent crude oil passed the USD 100 per barrel mark.

US:
The continued weaknesses of the US real estate market combined with high unemployment has made the US national bank (the FED) continue with its stimulus of the economy (Quantitative Easing 2). Housing in the US continues to struggle as foreclosures mount. Home prices in 20 cities for the 12 months through November fell 1.6% from a year earlier, the biggest decline since December 2009, according to Bloomberg.

On the positive side, US GDP growth improved to 3.2% in the 4th quarter, from 2.6% in the 3rd. By this the GDP level at last surpassed the previous peak of the 4th quarter 2007. The development was driven by quickened growth in domestic spending led by private consumption. Also, foreign trade contributed to growth due to plunging imports, which in turn affected inventories. The trade and inventory effects are related - if imports do not arrive, they do not get added to inventories. However, the economic recovery is still too weak to make employment increase significantly.

The above mentioned development is seconded by the Conference Board Consumer Confidence Index. The index, which had dipped in December, increased in January. It now stands at 60.6, up from 53.3 in December. Both the Present Situation Index and the Expectations Index improved. US consumers have begun the year in better spirit. As a result, the Index is now near levels not seen since last spring (May 2010, Index 62.7).

Asia:
The slow-down of the Chinese economy in order to avoid overheating is ongoing and the process appears steady and controlled with continued healthy conditions for the manufacturing sector. The sector is expanding, but at a slower pace than previously. Domestic demand is growing strongly - while export demand is stagnating.

The two indices for China’s manufacturing purchasing managers index (PMI) move in opposite directions in February, with HSBC/Markit going up and the “official PMI” going down. Normally they move in sync, but the difference this time around suggests more strength in the smaller and privately owned businesses as compared to the larger and more heavy industries.

The relatively weaker growth momentum of China’s manufacturing sector is said to be largely attributable to the tighter credit conditions in China and the slow-down in foreign demand. 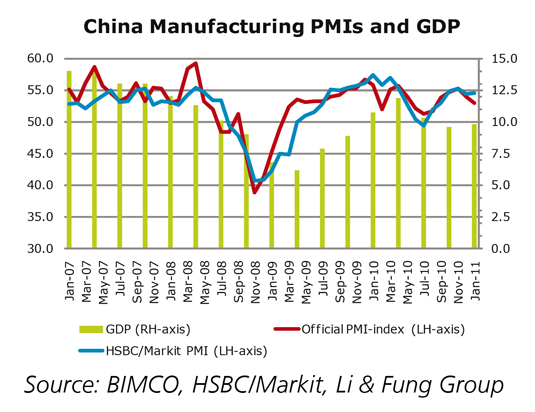 In the “official” PMI, 7 of the 11 sub-indices were lower than their respective levels in the previous month. Particularly noteworthy is that the new export orders index dropped sharply by 2.8 percentage points to 50.7% in January, the lowest in 11 months, showing slower export demand. Meanwhile, input prices index rebounded to 69.3% in January, suggesting that inflationary pressure has increased again.

China has announced another round of austerity measures in order to cool the property market down. As earlier rounds of austerity measures have had only limited success, another round of tightening policies are implemented and covers mores cities than ever before. The move confirms that the authorities are pressed and further tightening measures cannot be ruled out, including outright rate hikes. With inflation expected to stay elevated in coming months, barring a temporary dip in December from 28-month highs, tightening stays on the cards.

By forcing banks to lock up more cash with the central bank Beijing hopes to drain excess money from the economy and tame rising prices, which it worries may stir social unrest.

All of the many ongoing cool-down initiatives underscore that the central bank has shifted to a more “prudent” monetary policy, from its previous “moderately loose” stance.

India continues, as expected, to hike interest rates. The economy is growing particularly strong, with clear warning signs of inflation as a result. Despite a slowdown in inflation, it is still very high, coming down to 8% from 15% one year ago.

Outlook:
It is clear that the overall economic situation has brightened over the past year and expectations for a sustained recovery have improved, particularly in key emerging economies such as China and India. However, important risks still remain which could impact global economic recovery. These include rising sovereign debt concerns in some OECD countries, higher oil prices putting a damper on growth, lack of financial system reforms as well as a US economy hesitating to lift off.

The two-track development is expected to continue. Activity in the advanced economies is projected by IMF to expand by 2.5% during 2011-12, which is still sluggish considering the depth of the 2009 recession and insufficient to make a significant dent in high unemployment rates. Growth in emerging and developing economies in both 2011 and 2012 is expected to remain buoyant at 6.5%, a modest slowdown from the 7% growth registered last year.

The projections above assume that current policy actions manage to keep the financial turmoil and its real effects contained in the periphery of the Euro area, resulting in only a modest drag on the global recovery. The EU, the IMF and the ECB are currently working on a solution to reduce Greece’s debt along the lines of the Brady plan, which rescued Latin America from bankruptcy in the 1980s. The projection above also assumes that policymakers in emerging markets respond in a timely manner to keep overheating pressures in check.

Contact online
BACK TO: Containership orderbook back to “normal” size NEXT: Dry Bulk Shipping - 2011 got off to a rough start – a portent of what could be in sight for the remainder of the year