Global Economy: WTO says that trade is likely to grow by 13.5% in 2010. This is an upward revision of world trade from the March forecast of 10%. The massive growth comes back-to-back with the 2009 decline of 12.2%, and has to be seen in that perspective. However, the news is positive and definitely helpful for the global economy as it struggles to leave the crisis behind and sustain positive growth going forward.

WTO says that trade is likely to grow by 13.5% in 2010. This is an upward revision of world trade from the March forecast of 10%. The massive growth comes back-to-back with the 2009 decline of 12.2%, and has to be seen in that perspective. However, the news is positive and definitely helpful for the global economy as it struggles to leave the crisis behind and sustain positive growth going forward.

Governments in the Western world are facing huge challenges from large and growing fiscal deficits. This is hampering economies and makes growth – and thus also recovery – slower. Some European countries are likely to, or have already, returned to negative growth, but the overall picture is that a double-dip is more feared than likely to materialize.

Political action needs to be intensified to contain risks in advanced and emerging economies, address sovereign debt burdens, tackle the legacy challenges of the crisis for the banking system and put in place a new regulatory and institutional landscape to ensure financial stability. Moreover, politicians also have to restore faith amongst the public that strong growth and employment will return sooner rather than later to start the positive cycle of getting the wheels to turn faster and not at a hesitant pace as they do right now. 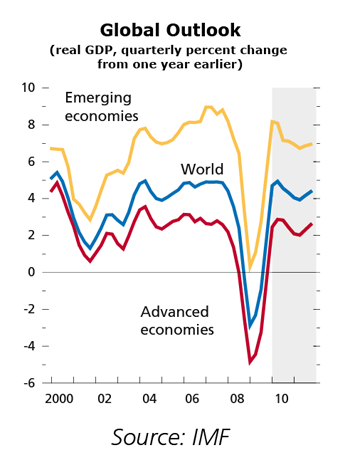 The US Consumer Confidence Index declined sharply in September, dropping to the lowest level since July 2009. The Index now stands at 48.5 (1985 = 100), down from 53.2 in August. The Conference board states that: “September’s pull-back in confidence was due to less favourable business and labour market conditions, coupled with a more pessimistic short-term outlook. Overall, consumers’ confidence in the state of the economy remains quite grim. And, with so few expecting conditions to improve in the near term, the pace of economic growth is not likely to pick up in the coming months.” This worrying picture is reflected by a number of other key figures including unemployment, housing statistics, manufacturing PMI and GDP.

The US import of goods still trails the high level we saw in 2008. Imports are likely to stay subdued as unemployment remains high and consumers have less money to spend when they are jobless. Personal saving as a percentage of disposable income came out at 5.8% in August. This extends the bad sentiment the second quarter displayed after a slightly more positive first quarter. Since the crisis broke, savings rates have consistently stayed above 5%. In previous years the rate was down at 2%, representing much more money spent and less piled up for protection against an unknown future. Despite low consumer confidence, private consumption has developed almost as it did during the two latest upswings in 1992 and 2002, where it quickly dropped to a lower level end of 2008 and into first half of 2010. When things started to improve, private consumption grew steady once again.

As 70% of the US GDP comes from private consumption, US growth of a significant size must come from consumers. Put into perspective, the US may run a large trade deficit but the share of GDP is only minus 3% (= net importer). If growth is to return strongly, exports should grow, imports should slow and private consumption has to expand at a faster pace than steady. 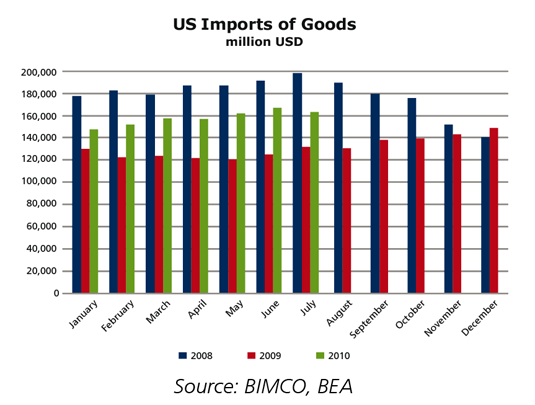 Largely due to the government’s credit tightening measures and actions to curb excess manufacturing capacity and cool the property sector, the China manufacturing PMI declined for three consecutive months (May-July), indicative of a slowdown for the growth momentum in the manufacturing sector. While the official PMI stayed above 50 during the slowdown, the HSBC/Markit dipped its toes into contractionary territory in July.

The latest readings of both indices are positive on a composite level and on nearly all sub-indicators. The current business conditions are likely to have a positive influence on the shipping markets and will probably result in another double digit-growth rate for the third quarter.

The recent slowdown of growth in China has to a large extent been developed by the cooling of exports. The comeback of China Manufacturing PMI has been impacted by higher domestic demand, while foreign demand has been more stable throughout the past four months. Domestic demand expanded strongly in the first four months of 2010, with a sub-index reading around 59, and then three months on a row with decline ended in July at 50.9 – the same months as the composite indicator bottomed out at 51.2.

Manufacturing PMI exports for the Euro zone and US are showing a similar slowing trend while remaining in expanding territory (above 50). 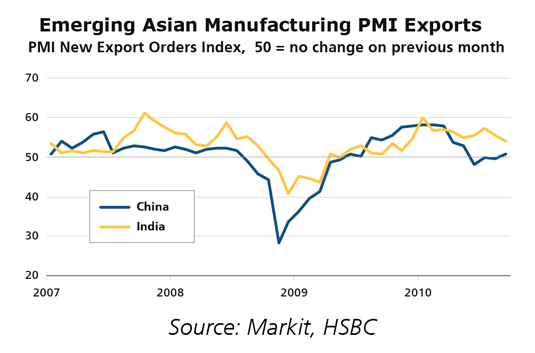 Even though the just-passed US House of Representatives bill to penalize China for not letting the Renminbi revaluate fast enough appears unlikely to become law, it is the peak of several months of currency dispute between the two nations. China warns that any trade protection in this respect is likely to harm bilateral trade and economic relations, as well as having negative repercussions on the global economy.

Some might be speculating that the currency-dispute may be one of the reasons behind the recent Chinese sell-out of US treasury holdings. Reducing its stakes in US bonds exposure considerably, Beijing has signalled concerns over the swelling US deficit, and other US-China tensions may have sparked this as well. China holds 1/3 of all foreign reserves in US bonds. A large sell-off could put pressure on the US Dollar and may indirectly spark a depreciation of the currency. Japan has replaced China as the top holder of American debt.

Despite many bad headlines in newspapers, the financing of the fleet seems to be going quite smoothly. Big stock-listed names are undoubtedly experiencing severe challenges but many owners, particular in the dry bulk segment, made so much money during the high markets of ’07-’08 that money is not the reason for cancellations or postponements. Take a look at the second hand market for example, where activity has been hectic in all three segments. This year is on course to be a very close runner-up to the record year of 2007 where total second hand sales went up to 23.2 bn USD, on the back of year-to-date data BIMCO projects that this year will be just in top of 22 bn USD, dwarfing 2008 and 2009 that came in at 12.7 and 14.9 bn USD respectively.

This time around the banks have stayed put and supported the industry. Remarkable few foreclosures have occurred considering past (and present) circumstances.

Contact online
BACK TO: Container Shipping - Going slow across the board has brought back black bottom lines NEXT: More box ship idling seen