Demand: There is no doubt that the main drivers in dry bulk shipping are beginning to show some muscle; China and perhaps even more so, vessel oversupply in particular in the Capesize segment, is responsible for recent weakness in rates as well as adding doubt to the future.

Demand:
There is no doubt that the main drivers in dry bulk shipping are beginning to show some muscle; China and perhaps even more so, vessel oversupply in particular in the Capesize segment, is responsible for recent weakness in rates as well as adding doubt to the future. The fact that the BDI dropped for 35 consecutive days came as a rude awakening to the industry. The dry bulk sector had surprised on the upside for almost a year, since it came out of the abyss in the spring 2009. But the market which was almost completely kept afloat by massive Chinese stimulus that counterbalanced the inflow of new tonnage in 2009 and so far in 2010 – now reveals that the balance may be much tighter than feared. By the end of July the deterioration ceased and Capesizes rates began their slow move upwards again, from a level below that of a Handysize vessel.

The biggest decline took place in the Capesize segment where the average of the 4 time charter routes have dropped from USD/day 58,904 to USD/day 12,073, equal to a drop of 80%. That reflects a freight rate level where only debt-free vessels can break even. If you, on the other hand, are considering a new built Capesize vessel with a 60% debt financing, you need to service capital costs: debt, interests and write-down’s on a scale equal to a break-even level above USD/day 30,000, before you start getting some return on your investment.

Despite the drop in freight rates and high supply of new vessels, overall demand is still strong, regardless of Chinese attempts to cool down the real estate sector and to combat inflation risks. 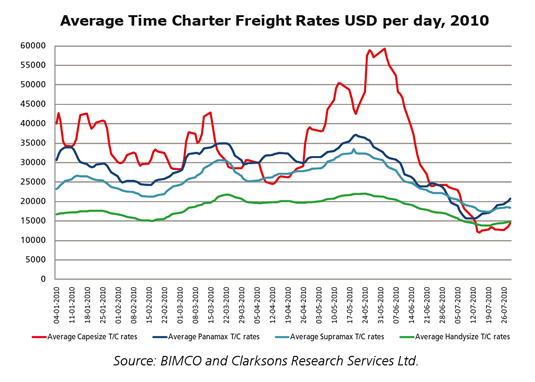 Spot rates fell like a stone – and that development was mirrored in time charter rates. This also affected activity with only 8 T/C fixtures for Capesize vessels in June and July together as compared with a 2010 monthly average of 14 from Jan-May.

Recently passed legislation which removes tax rebates for Chinese steel mills on various types of steel exports came into effect on 15 July. This is bound to add pressure on Chinese steel mills as steel exports were 153% higher y-o-y in first half of 2010 as compared to 2009, and domestic growth and domestic steel consumption now plays a more important part in relation to iron ore demand.

Chinese coal imports have remained strong in first half of 2010. The country imported 81.1 million tonnes, up almost 70% from the same period last year – (a y-o-y comparison that, in this case, makes sense). Driven robust economic growth, limited domestic supply and summer’s high electricity consumption, coal imports should stay strong in coming months. With the drought in southwest China diminishing, hydro-electric power production should improve. Despite that, Chinese thermal coal demand is expected to flatten out at around 10 million tonnes a months.

We expect Chinese iron ore imports to remain above the 40 million tonnes a month mark as we are in the midst of a slowdown and not a meltdown. During first half of 2010 imports tallied at 309.3 million tonnes – up 4.1% y-o-y. Even though June imports were as low as 47.2 million tonnes – July will come out south of that. 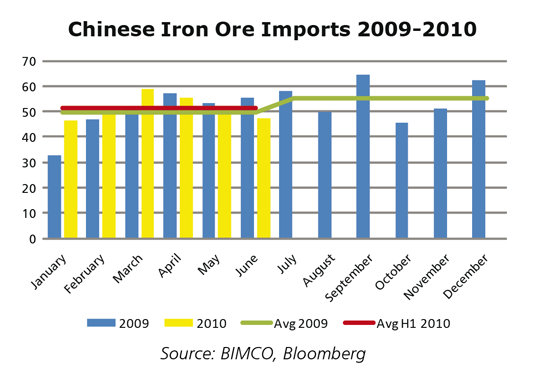 Meanwhile, the shipping world nervously watches the erratic course of the Chinese steel price which is “the one to watch out for” when scouting for signals indicating when demand returns and with it iron ore imports.

The active fleet has already grown by 8.2% during the first seven months of 2010, caused by deliveries of 39.8 million DWT of newbuildings offset by just 2 million DWT being demolished. 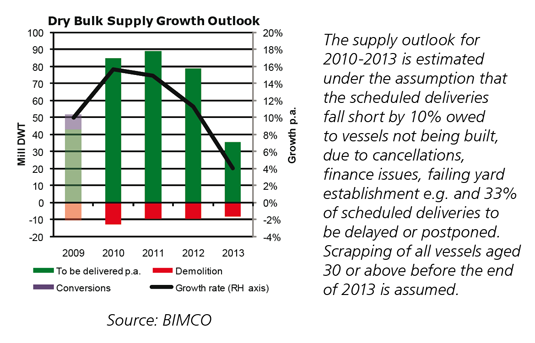 Demolition of dry bulk vessels has flattened out around 400,000 DWT per month since June last year. Last year, the average broken-up vessel was of 40,000 DWT aged 31. Out of 267 demolished vessels, only 43 were of sizes above 60,000 DWT which is equal to the segments facing the largest inflow of newbuildings. In 2010 the average broken-up vessel is 42,000 DWT aged 32. The scrap-ratio of larger vessels is unchanged.

On the contracting side, the activity has increased. 470 newbuilding contracts have been signed in the first seven months of 2010 adding 38.9 million DWT to the order book. This adds 165 vessels equal to 13.6 million DWT during the last two months. Average size is “back-to-normal” at around 80,000 DWT after the extraordinary 2009 contracting where the average size on a new contract was 97,000 DWT. This new ordering spree is difficult to comprehend when you take the large already existing order book into consideration. 2010 is on course to become the third largest contracting year ever, second only to the behemoths years in 2007 and 2008.

Even though some owners may need to renew their fleets and like to make their own makers-list and have a new vessel built to certain specifications, it is hard to see anything but oversupply of tonnage in the industry in coming years.

BIMCO forecast inflow of new dry bulk tonnage in 2010 to reach 85 million DWT offset by demolition of 13 million DWT. This could make the fleet grow by 15.6% in 2010 as compared to 10% in 2009. If demolitions stay at 400,000 DWT per month throughout the remainder of the year – the fleet would then grow by 17.4% – all other things being equal. Likewise, should expected deliveries fall short by 10% - the fleet will still increase by 13.8%, all other things being equal. In all scenarios high supply growth is unavoidable. 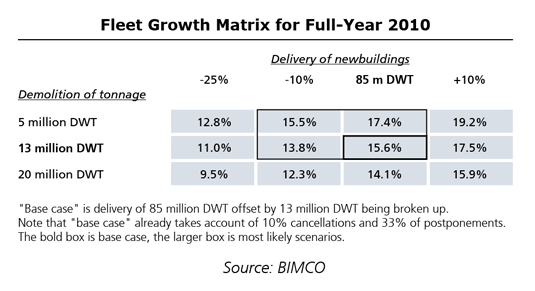 Outlook:
Looking at FFA levels (Forward Freight Agreements) the fourth quarter is foreseen to be strong, regardless of the Capesize delivery freak wave and the Chinese slowdown. The Capesize FFA (CS4TC) was quoted at USD per day 27,000 at 2 August. That level is equal to a doubling of current freight rates. The FFA has however proven to be an unreliable forecaster many times before, and even though the recent drop in rates may be inflated by seasonal summer lull, BIMCO expects rates to remain under pressure as fundamentals indicate a clear bias in the balance towards too many ships for the available cargoes.

In the near future, demand for thermal coal and grain is expected to provide support to the freight markets and put a floor under the rates, but the Chinese steel markets – and with it the demand for iron ore – are needed if the floor is to remain throughout the year. A supporting factor going into Q4-2010 is the new contract price for iron ore, which will be considerably lower than it is in Q3-2010, as it mirrors to lower spot prices that we see at the moment.

Contact online
BACK TO: Macro Economics - China is spearheading the global recovery NEXT: Tanker Shipping - Tanker markets are in limbo – waiting for a better demand environment to make the day