This recession was caused by a financial crisis, and what we do know about recessions caused by financial crises is that they are followed by very weak recoveries. Why is that? It is because the financial system has been fundamentally damaged – it is much less able to do its job of basically channelling money from savers to investors – so if you are an entrepreneur or an investor who wants to raise capital to start a business, you will be especially hard hit. What we also know is that there is often an overhang of investments that were financed by debt. That debt becomes impaired so it clogs up the banking system. That is worrying and basically where we are now. The financial crisis was explosive, hard and brutal, but the debt crisis is on track to become lengthy and exhausting.

As a result of the crisis we experienced a credit crunch which is now easing and consumers persistently saved a higher proportion of their income. This hurts consumption and those industries most dependent on credits – that is cars and houses – both of which are almost always bought with a loan. Not only are house sales down dramatically, but the houses that people are buying tend to be smaller and simpler. Lately the housing market has entered into a more positive development.

The shipping industry experienced all of the above symptoms before and during the crisis with the building of a large orderbook (financed by lots of loan capital) and credit crunch impacting the availability of letters-of-credit, also for shipping, which haunted especially the dry bulk sector. Letters of credit are the lube oil of international trade. It’s all interrelated. 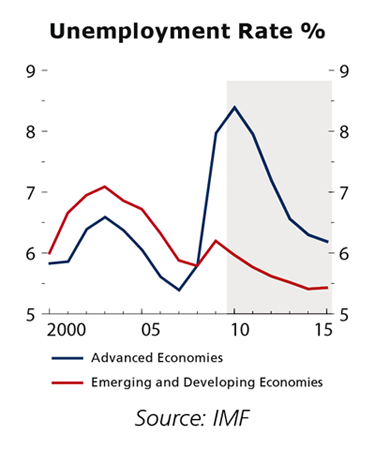 Unemployment in the US dropped to 9.7% on the back of record-high new employment reported in the job report early June. However, the job creation was much weaker than the market expected. It indicates that the labour market is about to find its feet and slowly start to recover. Should this increase in employment continue, it is likely to stimulate private consumption, leaving only little downside risk of the economy being hit by a double-dip.

Meanwhile, the unemployment rate continued to surge in the Euro-zone which hit a 12-year-high rate in April at 10.1%.

There is some optimism surrounding the US economy, but the clear skies are still far away. Because personal consumption expenditures account for 70% of the GDP it is relevant to keep an eye on consumers and see how they are doing.

The growth rate of US private consumption expenditure ended up being somewhat disappointing in April. After 6 months of firm growth, the growth rate flat lined in April. But with personal income continuing its growth, this slowdown may turn out to be short-term, as the positive employment development should firm the figure already from next month. Private consumption contributed with 2.5% to GDP growth in Q1-2010. US GDP grew by 3.0% in Q1, quarter-on-quarter. 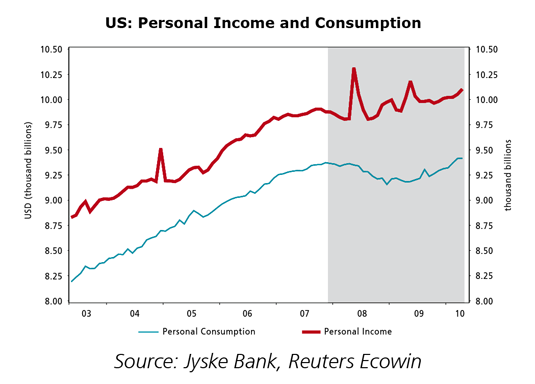 The Personal Saving Rate (the fraction of the income that is not consumed) declined for the 3rd consecutive quarter. The PSR is an indicator that normally peaks at the beginning of an economic recovery as consumers shift their expectations to the future in a more optimistic direction and start spending more and save less. The PSR rate that peaked at 5.4% in Q2-2009 has now dropped to 3.4% in Q1-2010, which is seen as a positive trend for consumption.

Even thought the housing sector remains weak, the US consumer confidence posted its third consecutive monthly gain in May with a reading of 63.3. Although still weak by historical levels it appears to be gaining some traction. Consumers’ optimism about the short-term future was significantly better in May and the percentage of consumers expecting business conditions will improve over the next six months increased to 23.5 percent from 19.7%. Consumers were also more confident about future job prospects.

Chinese Premier Wen Jiabao said on 31 May that it is too early for China to adopt an exit strategy and pull back from economic stimulus measures as the world’s economy could slip into a recession again.

The Greek debt fallout is likely to delay the recovery of Europe and add uncertainty to the European market, one of China’s major export destinations, Wen added. Listing major challenges facing the Chinese economy, the premier said China has to remain a relatively fast and stable economic growth, optimize economic structure and tame inflation. He also vowed to keep housing prices “at a certain range”.

In response to the Greek crisis, global policymakers installed an emergency financial safety-net worth EUR 750 billion to bolster financial markets and shore up the Euro against contagion from the Greek crisis. The package consists of EUR 440 billion in guarantees from Euro zone states, plus EUR 60 billion in a European debt instrument. The IMF will contribute EUR 250 billion, taking the total to EUR 750 billion, or around USD 1 trillion. The Greek debt crisis is the markets’ contesting both political decision-making ability in the Euro zone as well as the will to defend the euro.

The official China Manufacturing PMI-figure from May showed a larger drop than expected, going down to 53.9 from 55.7 in April. This suggests that growth will continue even though it will be slower in coming quarter. This could be the result of the Chinese Government’s attempt to limit real estate property speculation that puts a damper on house sales and construction. This is evident from the sub index for new orders (domestic) which took a nose-dive to 54.8 from 59.3, expressing continued expansion but at lower level. 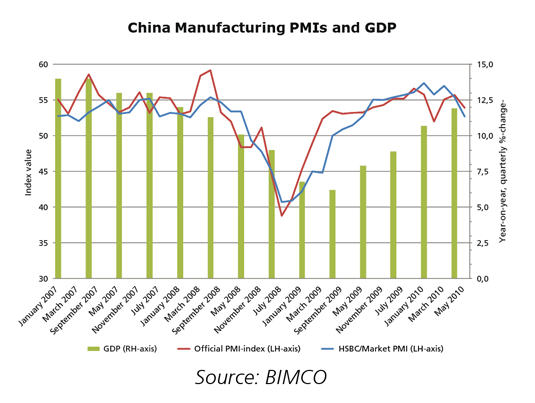 Meanwhile the China Manufacturing PMI from HSBC/Markit dropped to 52.7 from 55.4. Even though both PMI’s dropped to 11-months low, it is good news that the growth pace is slowing down, minimizing the overheating risk for the economy as tightening measures seems to work.

Q1-2010 growth in India proved to be as strong as Q3-2009 and showed that the economy is on track despite the slower growth in Q4-2009 which the primary sector was to blame for. GDP grew by 8.6% year-on-year in first quarter, driven by the manufacturing (secondary) sector. This is supported by industrial production data that shows 15% year-on-year growth in Q1-2010. Also on the demand side, things are looking good with solid growth in income and relatively low indebted households, giving reason to believe the private expenditure consumption could stay robust going forward. However, inflation is quite high at 10% which means an interest rate hike could be round the corner adding to the effect of the continued pull back from economic stimulus on both fiscal and monetary policy areas.

In most advanced economies, fiscal and monetary policies should maintain a supportive thrust in 2010 to sustain growth and employment. But many of these economies also need to urgently adopt credible medium-term strategies to contain public debt and later bring it down to more prudent levels. Financial sector repair and reform are additional high-priority requirements. Many emerging economies are again growing rapidly and a number have begun to moderate their accommodative macroeconomic policies in the face of high capital inflows. Given prospects for relatively weak growth in the advanced economies, the challenge for emerging economies is to absorb rising capital inflows and nurture domestic demand without triggering a new boom-bust cycle.

Contact online
BACK TO: Macro economics - Slow and fragile recovery NEXT: Dry Bulk Shipping - Lots of newbuildings to come but still not undermining a positive market