Generally speaking demand is still pretty sluggish, but having said that, the future trends have already arrived. Intra-Asia trade is set to be where the volume growth is going to be strong. Rates for containers leaving China bound for all destinations have gone up, as can be seen from the China Containerized Freight Index which stands at 985.6, equal to a 30% surge since the bottom in Q2. 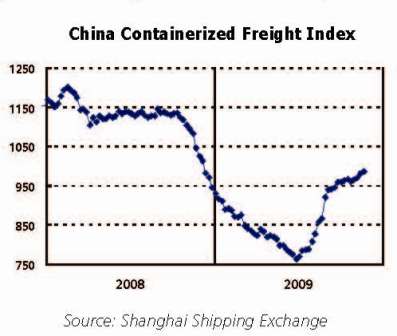 The major Asia-EU trading lane has regained some of the lost terrain with headhaul volume from Asia to Europe down as much as 12% in Q3 and backhaul volume from Europe to Asia up by 10%. The headhaul/backhaul ratio is currently at 2:1. This ratio used to be 3:1, but the change clearly highlights the transition of the economic centre moving from west to east. Trans-Atlantic volumes are down 24%.

On the trans-Pacific trade, the port of Long Beach reported a drop in loaded inbound containers of 22.4% in October. Trade has been set back 4 years in volume terms. Overall global container demand is still forecasted to contract by 10% in 2009.

US Consumer Confidence Index came out with a small increase, as the Index went to 49.5 from 48.7 last month. US consumer confidence still reflects a pessimistic sentiment. Combined with US consumer spending, which moves slowly up and down somewhat undecidedly, this signals that consumers are unlikely to provide sustained support to the US economy. US consumer spending rose 2.9% in Q309 – a lot of it related to spending on motor vehicles. Inventories are still falling – but that will then continue to support the economic growth in the coming quarters as re-stocking continues.

The US unemployment rate now stands at 10.0%, which is not helping consumer demand growth. Against a background of high unemployment, low income growth and tight credit, it seems unlikely that consumers will be able to spend more freely anytime soon. Another example of the economic centre moving eastwards is the China manufacturing PMI which continued to strengthen in October. Still, there are no signs that policy tightening is necessary or imminent. At 55.2, the official China PMI reached the highest level since April 2008, and was up from 54.3 in September. The index has been in expansion (over 50.0) for eight consecutive months, signalling a steady recovery in China’s manufacturing sector.

The total deliveries of 2009 fall way short of the amount of tonnage that was scheduled. So far this year, 988,000 TEU has been delivered. Comparing this with the scheduled amount of 1.854 million TEU that was going to be delivered, it must be fair to conclude that the container order book is slipping significantly. Two months ago, BIMCO estimated that 1.4 million TEU would be delivered in 2009 under the assumptions that 10% of the full scheduled order book was cancelled and 25% of the rest would be delayed or postponed into the following year. That figure has now been revised downward, as can be seen from the graph. Furthermore, DNV estimates that 92 container vessels were cancelled in the first 10 months of 2009.

Estimates of idle tonnage tolls at 1.43 million TEU (11% of total fleet) clearly signal the extreme trading conditions in the container market. This is the highest amount during this crisis. Lately, smaller changes in the composition have shifted towards larger and carrier- controlled tonnage due to seasonal service rationalizations and 2,000-3,000 TEU sized-tonnages reemployed on intra-Asia routes. 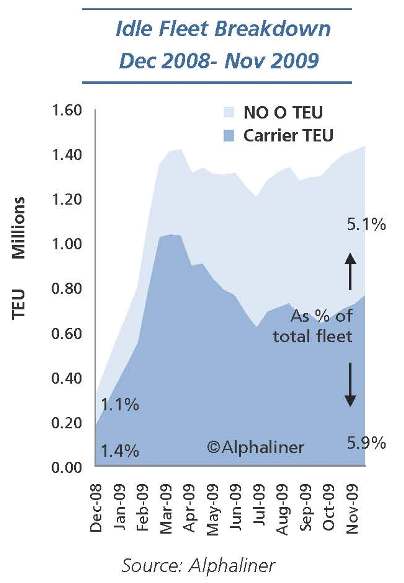 The volume on the second-hand container ship market has been the lowest in 7 years. This year-to-date just 91 vessels, valued at only USD 613 million, have been transacted. Total volume is down by 30% in 2009 y-o-y. Transactions in larger vessels of 2,000 TEU and above have been particularly subdued, with only 15 transactions in 2009. Transactions of smaller vessels of 1,700 TEU or below have been far more resilient. The second-hand market for container ships is in a respirator, with a total average of 9 transactions per month.

The slowdown in seaborne trade has forced shipping lines to reduce costs and adopt measures to meet supply and demand ranging from reducing fuel consumption, parking ships, delaying delivery of new vessels to outright sending ships to yards for scrapping. Slow steaming does have the dual advantage of reducing fuel consumption, as well as increasing the capacity needed in the rotations/trade lanes.

As the financial storm is calming, inventory cycle is materializing; the next economic theme will be the transaction from the restocking phase to a self sustainable recovery. The latter is highly dependent on development in the labour market especially in the US. Recovered job markets mean positive wealth effects, a stop in the rise in savings rates and suggesting positive consumption figures going forward, effects which are positive for container shipping.

We are done with the peak season for container shipping this year, and coming months could see increasingly idle fleets and resumed downward pressure on rates.

Going forward, the order book still seems scary. Seen in the light of much lower than anticipated delivery of container tonnage this year, the pain merely seems to be stretched even longer. This development may play better days into the hands of carriers, even though they are deemed to face very different markets than those of just a few years ago. 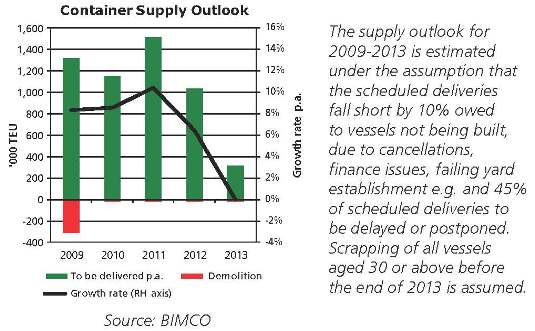 Carriers continue to stretch loops with extra slow steaming. Some services are stretched by 1 week, from 9 to 10. Also, super slow steaming on a selection of trades from Maersk is now being followed by the CKYH alliance, following their statement made at the 6th World Shipping (China) Summit held in Qingdao in the middle of November. The CKYH alliance consists of COSCO, “K” Line, Yang Ming Line and Hanjin Shipping. The operating loss per TEU in third quarter was USD 167, estimated from the accounts of 4 liner companies representing 25% of the market share.

This publication has been prepared by BIMCO for information purposes only. It has been prepared independently, and based solely on publicly available information. Whilst all reasonable care has been taken to ensure that its contents are not untrue or misleading, no representation is made as to its accuracy or completeness and no liability whatsoever is accepted for any loss arising from reliance on it.