On 22 July, Russia and Ukraine signed an agreement to allow grain exports from three ports in Ukraine during a period of 120 days. On 7 September, Putin expressed concerns over the agreement, giving rise to uncertainty about its scope and renewal.

More than 40 days have passed since the agreement was signed, and 2.1 million tonnes of grain have been exported through the ports of Chornomorsk, Odesa and Yuzhne. After a slow start, around 0.5 million weekly tonnes of grains are now being exported. At this pace, monthly exports will surpass 2 million tonnes. 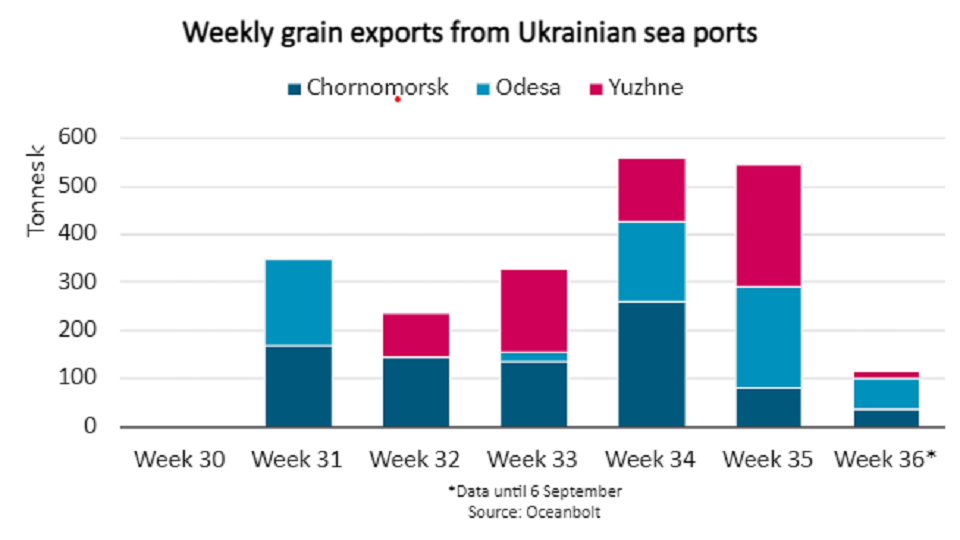 In spite of limited exports so far, the grain agreement has helped cool down global food prices. These are now back to February levels according to FAO’s food price index. If Russia attempts to alter or stop the deal, this progress could be reversed.

Russia has recently criticised the agreement claiming most shipments are headed towards the European Union and Türkiye rather than the emerging economies in Africa it was designed to aid. Out of Ukraine’s grain shipments under the agreement, approximately 70% of volumes had Türkiye and the EU as their destination. Russia has expressed an intent to renegotiate the deal and restrict grain exports to the EU.

In August, Ukraine showed interest in expanding the deal to include cargoes such as metals. In addition, the country expressed hope of opening the port of Mykolaiv under the deal, another key port for grain exports.

While a restriction of exports to Europe could benefit bulk shipping through increased average haul, a risk to loss in volumes remains. Crop spoilage remains a risk in Ukraine with storage at capacity and the ongoing maize harvest adding further pressure.

Insecurity remains a factor among those shipping Ukrainian grain. The ships operating in Ukraine are on average six years older and 32.9% smaller than a year ago, reflecting risk aversion and higher insurance premiums on hull value. Russia’s dissatisfaction with the deal is likely to further hinder Ukrainian exports as decision makers remain hesitant to risk their assets.